Hines' mystery tenant is adding a third floor to its space at the developer's timber-framed Atlantic Station project. 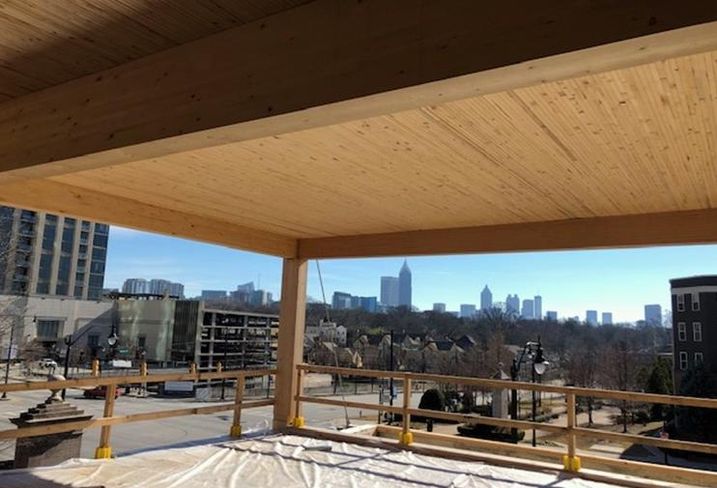 Courtesy of Hines
Views of the Atlanta skyline from a future floor at T3 West Midtown.

Cincinnati-based architectural firm BHDP filed permits with Atlanta to construct the interior of the fourth floor of T3 West Midtown, a 203K SF, seven-story creative office building at 17th and State streets, for a tenant known only as Project Northstar.

This is the secretive company's third helping at T3 — permits were previously filed for work on the fifth and sixth floors — and its space now totals more than 90K SF.

Companies often use code names when evaluating real estate space in order to achieve anonymity, especially if the lease potentially involves some level of economic development for the region, such as new offices or new employees. Sources familiar with the deal tell Bisnow an announcement on the identity of the company could come within the next two to three weeks.

The identity of Northstar has been one of speculation in commercial real estate circles for many weeks, especially with prominent corporate names still floating around the Midtown market seeking potential office space, including Microsoft, Facebook and Tesla.

Hines Senior Managing Director John Heagy declined to comment. Calls to BHDP were not returned as of press time.

Project Northstar is a big win for Hines' building that started construction without a single tenant in tow and is now nearly half leased just as it finishes construction. Hines has doubled down on Atlantic Station — one of Atlanta's first major mixed-use projects — by breaking ground on another spec office development known as Atlantic Yards, a two-building project more than twice the size of T3. It is currently under construction.

That may not be as risky a bet for the developer as it seems. Midtown has been Atlanta's hottest office submarket since the end of the Great Recession. Part of its allure is its proximity to Georgia Tech, one of the nation's premier technology schools. By extension, Midtown has become a magnet for technology companies seeking to tap into that talent pool.

In recent years, Midtown has attracted some banner corporate names, including Google, music streaming service Pandora, healthcare provider Anthem — which is leasing an entire tower at Tech Square for its IT division — and financial giant BlackRock, which opened a technology hub at 725 Ponce last year.

Since 2010, the metro area also added 53,000 new tech-related jobs, which encompassed nearly 10% of the entire region's workforce last year, according to the Cyberstates 2019 report by CompTIA. The Atlanta region now ranks 10th in the nation for tech employment.

Moynihan said few expect this momentum, especially among tech firms, to wane in 2020.

“It's still the place to be,” he said. "The cool place where everybody wants to say they office."