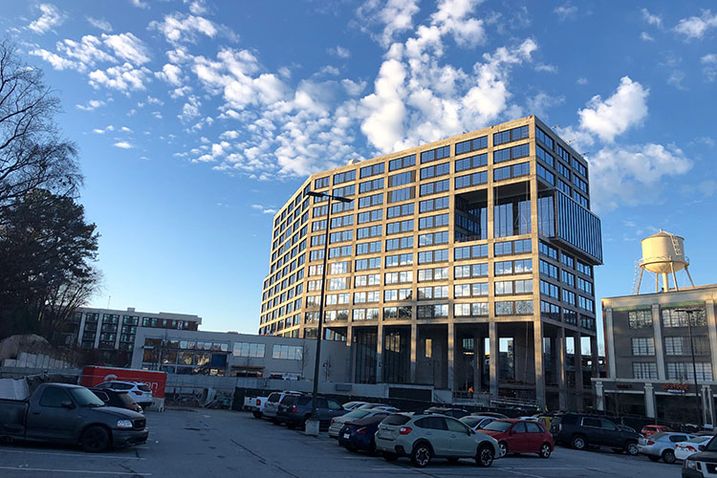 Kroger remains in the project and is being reconfigured so its entrance spills directly onto the Atlanta BeltLine path. Koffler declined to comment further on the deal.

New City filed permits earlier this week to build out two of the four floors that BlackRock will ultimately take, initially totaling 62K SF of the 12-story, 370K SF tower off Ponce de Leon Avenue in Midtown, and across the street from Ponce City Market. That part of Midtown is in Atlanta's Poncey-Highland neighborhood and bordering the Old Fourth Ward neighborhood, which have been epicenters of redevelopment for the Midtown area.

While BlackRock has leased four floors at 725 Ponce, a source familiar with the deal said the firm will initially use the top two floors of the building beginning at the end of 2019. Currently, BlackRock employees are housed in WeWork's location at Coda in Midtown, as Bisnow first reported.

Within five years, BlackRock plans to house 1,000 employees at 725 Ponce, with most jobs focused on technology innovation as well as client service teams, making it the third-largest U.S. office outpost for BlackRock outside of its New York headquarters, the source said.

Known as Project Sky in economic development circles, BlackRock is expected to garner $25M in tax breaks in exchange for creating 1,000 new jobs in Atlanta by 2024. Called an iHub, BlackRock's Atlanta office is one of three globally, including a 1,500-worker operation in India and another 600-person hub in Budapest.

BlackRock is the latest win for New City at the redevelopment of a former Kroger shopping center. The supermarket was affectionately known in Atlanta as Murder Kroger due to a past spate of crime on the property, but the blue-chip tenants moving to the development show the site's reputation hasn't dragged down leasing.

Earlier this year, New City secured a lease with McKinsey & Co., which is moving from Downtown Atlanta, and also recently announced a deal with WeWork. It has been previously reported that New City is in talks with Starbucks to lease the remainder of the space at the building.

The activity level at the project has already prompted New City to eye a second phase of the mixed-use project, a 180K SF, office-centric, mixed-use tower that would rise on a 1.5-acre parcel next to 725 Ponce.

CORRECTION, JULY 11, 3 P.M. ET: A previous version of the story incorrectly stated the neighborhood where 725 Ponce is located. The story has been updated.