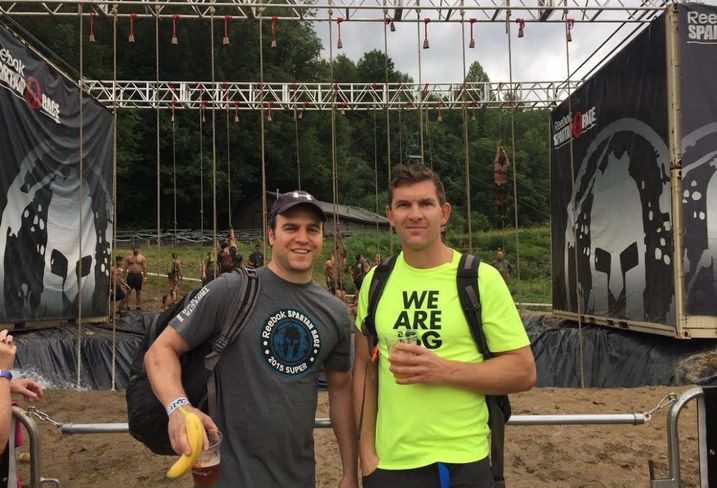 Andrew VanHorn is one of The JBG Cos' principals, and he's leading the DC area's biggest developer's efforts in NoMa and northeast DC. That's him on the right in the JBG shirt. He chatted with Bisnow about why the company is investing so heavily in DC.

Bisnow: When did JBG start developing in NE DC, and what about the area attracted the company's interest?

Andrew: We've owned property in NE DC for a little over 10 years. We looked at NoMa and NE DC and thought there was a fantastic existing base of tenants and occupants at the time, but it was also a very transitional, low-cost environment because there were no amenities or very limited amenities. Then several years ago Union Market opened up and brought excitement and buzz to NE DC in a new way as the city expanded east. The combination of the new retail and the growth path of the city led us to make additional investments in NE over the last several years as well.

Andrew: Right now we are moving forward with a PUD on our Gallaudet land partnership, which is a 1M to 1.5M SF mixed-use office, residential, retail and educational project. That project is really going to flesh out the urban grid in that area, and bridge the Union Market and Gallaudet micro-markets. We also have Eckington Yards entitlement underway—which is a 500 to 600k SF mixed-use project with a large retail placemaking opportunity. It is very similar to Gallaudet in that way, and will continue the knitting of the neighborhood fabric together north of New York Ave. And closest to realization is our Brandywine JV to the south of New York Ave, in the heart of NoMa proper, a 600k SF game changer—it's got 60k of retail, 30 of that being a new Landmark Theater, and we'll have another 30k SF of restaurants, bars, cafés and small shops. Above all that retail we'll have 200 residential units, 130k SF of creative office and a 250k SF trophy building.

Andrew: It's one that's obviously been undergoing continuous transformation since the Metro delivered, so it's been booming for a long time now. We honestly thought there might be a pause button there, but it continues to be very attractive from a fundamentals perspective. It continues to have a lot of job growth, a lot of residential demand, and as it's evolved it's actually gotten more exciting than ever. There are a couple of emerging places like NoMa where the city is really growing into it, and the amenities are following. While the area has had more government tenants historically, we do see the tenant base there evolving. The pre-lease opportunities we're talking to for our office building are all private market, very young companies, as far as their employee demographics. People understand that you can get a great value because the environment is changing rapidly.

Bisnow: What do you think is most needed in NE DC? Both in the short and long term.

Andrew: The one thing that everybody's aware of is that NoMa lacks quality retail to serve such a large market. And another thing I think NoMa lacks is some unique office space. A lot of the offices built there were targeted toward government tenants, and I think a well-designed office geared at private tenants will provide a really great option in the market for people who want trophy product but are not interested in paying downtown trophy prices. You can go from paying $85/SF downtown to paying $60/SF in NoMa and get equivalent, or better, space. And as long as the retail's there, you're going to feel like you're in a vibrant market. So I think the combination of better retail and office are two key things that will reinvigorate demand and interest in the area, and we're bringing some of that and others are as well.

As far as what's completely missing, it's probably good open spaces, and that's where you need the public entities to step in, and where DC and the BID are doing their job. In the short term, the BID is partnering with landowners to develop temporary public spaces; for example we did a small space called Lunchbox on the corner of 1st and N, where we partnered with the BID to let them open a food truck picnic area—that kind of space is desperately needed. As far as long-term public space, the BID is buying and delivering large, programmable park space, which is critical to the neighborhood. You need a place like that for people to gather and create that sense of community.