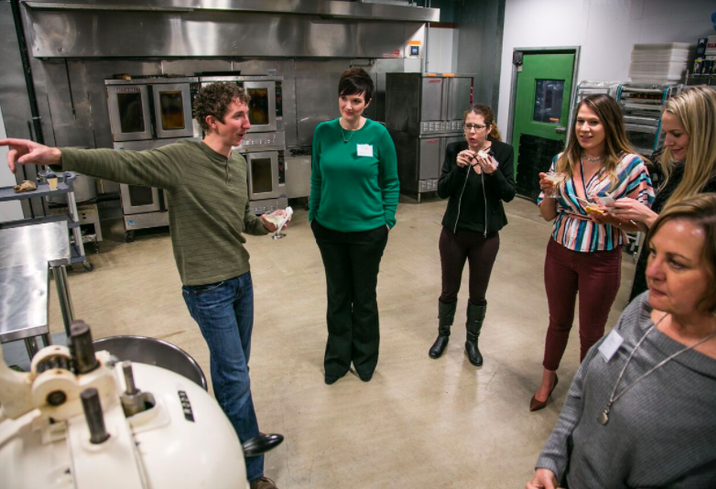 Courtesy: Duane Heaton Photography/Moki Media
Kirk Francis, founder of Tastemakers and founder/co-owner of Captain Cookie and the Milk Man provides guests with a tour of the new Tastemakers facility.

When it debuted at the Navy Yard last year, District Winery made D.C. culinary history as the first winery within city limits. Now, another winery has entered the equation. City Winery recently opened its doors in Ivy City, complementing several breweries, distilleries and restaurants already in the area.

City Winery is located at 1350 Okie St. NE in the former Love Nightclub building. In addition to a wine production facility, the 42K SF space features a concert venue, a Mediterranean restaurant and a rooftop terrace. While this is City Winery’s first D.C. location, it has a presence in several other U.S. cities, including New York City, Chicago and Boston.

Target announced it will be setting up shop on the corner of New York Avenue and 16th Street NE, with plans to open in fall 2020.

This 67K SF retail space will be Target’s third location in D.C., joining an existing store in the Columbia Heights neighborhood and a planned small-format store in Cleveland Park, which is set to open in spring 2019.

In addition to home accessories, toiletries and food and drink, the store will feature a Starbucks and CVS Pharmacy. Customers will also have the option to purchase products online and pick them up at the store.

Washingtonians who are in search of a low-key alternative to Union Market food hall can take the Red Line a couple of stops north to Brookland.

“[Vendors] have access to shared kitchen spaces and don’t have the burden of a full-scale build-out with compliance to code,” Juliann Francis said to Eater. “We’ve taken care of that for them.”

Located at 2800 10th St. NE, Tastemakers operates out of a former mayonnaise factory. The founders invested $1.2M into converting the space into a sustainable and energy-efficient food hall.