The neighborhoods east of the Anacostia River have long suffered from underinvestment, but a new government agency moving to Ward 7 is expected to spark a surge of new interest in the area. 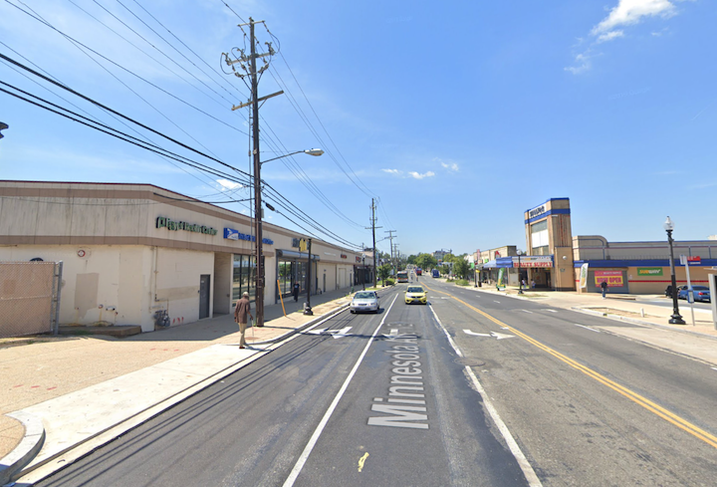 Google Maps
The block of Minnesota Avenue NE where D.C. plans to anchor a new development with a 700-person agency.

Mayor Muriel Bowser announced May 28 that her administration plans to move the 700-person Department of General Services agency from U Street NW to anchor a new development near the intersection of Minnesota Avenue and Benning Road NE.

The move represents the first step in an initiative the mayor announced in September to use D.C. agency relocations as a way to spur economic growth and attract more retail amenities east of the Anacostia River.

Several developers tell Bisnow they are looking at opportunities to invest in the area, and they believe the DGS lease will serve as a catalyst for the neighborhood's growth.

"There is growing interest in Ward 7, and I think this particular project is clearly a tipping point," The Wilkes Co. Chairman Sandy Wilkes said of the DGS move.

Wilkes, who serves as vice chair of the Ward 7 Economic Development Advisory Council, does not have any projects in the ward, but he said he is looking for opportunities for development in the area.

Warrenton Group CEO Warren Williams, the chair of the Ward 7 EDAC, has multiple projects in Ward 7's Deanwood neighborhood. He said he thinks the addition of hundreds of D.C. employees to Minnesota Avenue will create more demand for restaurants and retail tenants at his projects.

"The Deanwood community will certainly benefit," Williams wrote in an email. "I’m thinking about the day time workers having lunch at the Strand Smokehouse. That may turn into happy hour or dinner, or purchasing groceries during the day at the Deanwood Town Center."

Ward 7 Council Member and former Mayor Vincent Gray said the goal of moving the DGS to Minnesota Avenue NE is to attract additional food retailers that the community can benefit from. 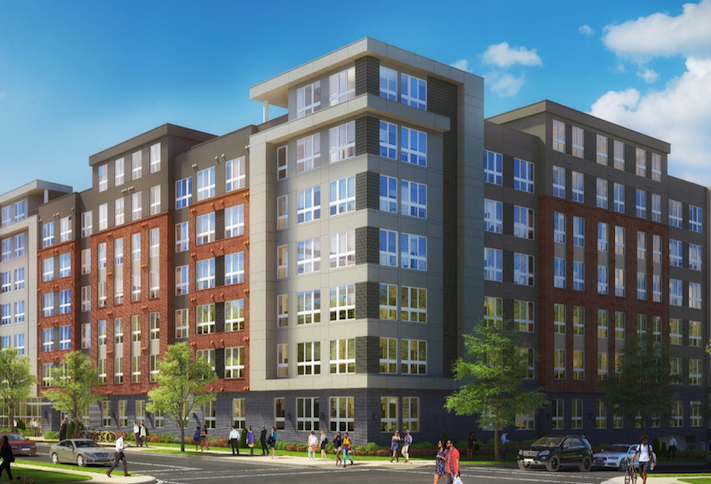 Courtesy of CityInterests
A rendering of Eleven Parkside, a 191-unit apartment building at 800 Kenilworth Terrace NE

CityInterests broke ground last month on a 191-unit apartment building as part of its 3.1M SF Parkside development near the Minnesota Avenue Metro station. The firm is also raising money for another 230-unit project it aims to break ground on early next year. CityInterests Managing Partner Peter Farrell said he has seen investors become more interested in the area in recent months.

"I think there will be those that will say, 'Hey, this is an established investment market and I want to be a part of it,'" Farrell said. "Without a doubt, talking to everybody and saying we have another 700 office workers moving in a quarter-mile from our project, that is good news."

Farrell said he sees the Minnesota Avenue-Benning Road intersection as the downtown of Ward 7. In addition to the Metro station and bus connections, the intersection is planned to have a stop on the D.C. Streetcar line, which the city plans to extend east from H Street to the Benning Road Metro station.

Across the intersection from the planned DGS site, Donatelli Development in 2014 delivered Park 7, a mixed-use project with 376 apartments and 20K SF of retail.

"A commercial installation like DGS has an absolute radiating impact on a submarket," Farrell said. "In this case, I'm absolutely confident that downtown Ward 7, by and large, will be the beneficiary of what's going to amount to 700 people coming to work and supporting our retailers. It's a big win for Ward 7."

Last year, German grocer Lidl committed to open a supermarket at Rappaport and WC Smith's Skyland Town Center development in Ward 7. It would be the first new grocery store to open east of the river in more than a decade. (Walmart had previously committed to the project, but backed out of the deal.)

WC Smith also signed a deal in 2018 for the first Chipotle location east of the river at The Shops at Park Village in Congress Heights. WC Smith Executive Vice President Brad Fennell said the District's investment at St Elizabeths East was crucial in bringing in Chipotle, and he thinks the latest investment on Minnesota Avenue will have a similar effect.

"When you think about retailers' decisions, jobs and stability and activity nodes, all of those things are incredibly important to their decisions, and [the DGS move] can't help but be additive and supportive," Fennell said.

Fennell said WC Smith is actively searching for development opportunities in the Minnesota Avenue area. He said it previously competed for a project near the intersection of Minnesota Avenue and East Capitol Street that MRP Realty won. 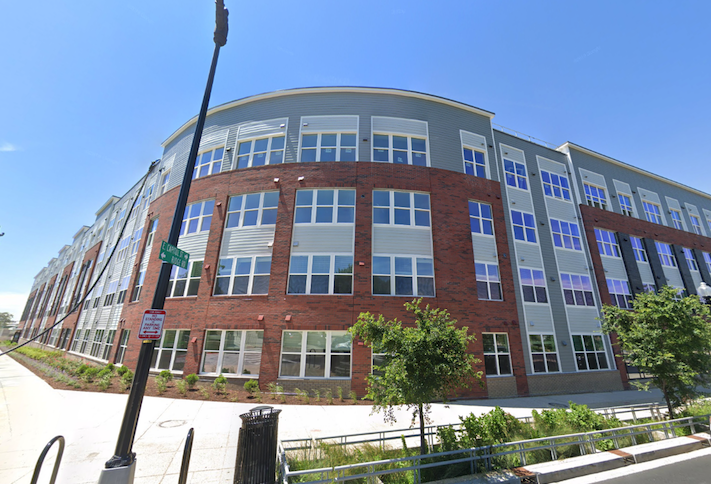 MRP last year delivered 137 units of affordable housing on the site at 3534 East Capitol St. NE, and it is under construction on the second, 95-unit phase. MRP Managing Principal Bob Murphy said he is looking at more opportunities for development in the area, and he has seen growing interest from other investors in Ward 7.

"All of this stuff takes time," Murphy said. "Unfortunately there is no light switch for this kind of stuff, but if you put time and effort in and make little steps, then the little steps cover a lot of ground over time."

Neighborhood Development Co. in December broke ground on Benning Market, a food hall at 3451 Benning Road NE, about a half-mile from the site where the DGS headquarters is planned. The 7K SF food hall will be operated by Market 7, a company founded by Ward 7 resident Mary Blackford that has featured a variety of black-owned businesses in its pop-up food halls in the area.

"This is more than just retail," Blackford said in a December release. "Market 7 is a real, multi-generational, community-based approach to sustaining Ward 7. The new Market 7 at Benning Market will be an exciting expansion of the work we are already doing to bring abundance, vitality, and total wellness to our community by creating a space where our local food ecosystem and small businesses can thrive."

In addition to the projects in the nearby area, the development that DGS signed on to anchor offers a host of its own retail space that could benefit from the influx of daytime workers. Cedar Realty Trust, the developer behind the project, acquired the Senator Square Shopping Center in 2018, and it also owns the East River Park shopping center across the street. It is combining the developments into a mixed-use project branded as Northeast Heights. 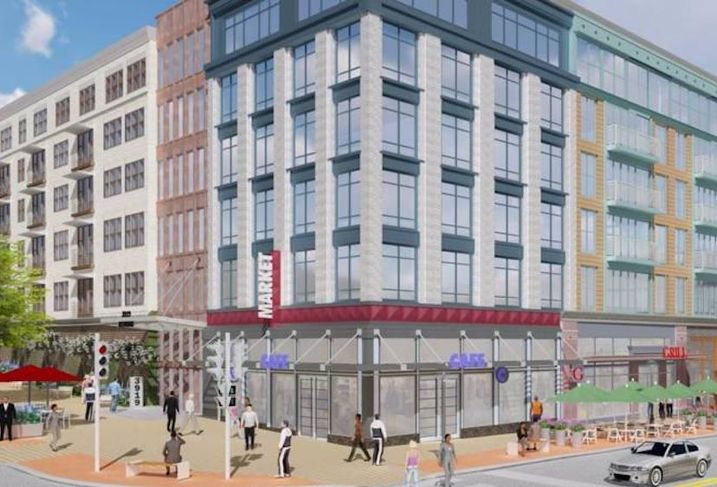 Cedar Realty Trust, a publicly traded REIT, denied requests for an interview and declined to answer emailed questions seeking an update on project plans. On the firm's Q4 earnings call in February, prior to signing DGS, Cedar Realty Chief Operating Officer Robin Zeigler said the project is planned to include 190K SF of retail and over 1,000 residential units to go along with the office component.

"We anticipate Northeast Heights, upon completion, to be transformative for the neighborhood and the surrounding communities," Zeigler said on the earnings call, according to a transcript from The Motley Fool.

Farrell expects some of the benefits of the DGS move will spread to CityInterests' 3M SF Parkside project on Minnesota Avenue, but he thinks the city still needs to do more to spur development in the area.

He said the District should offer tax increment financing packages and workforce housing tax abatement incentives to accelerate the planned developments in the area. He also hopes to see more District and federal government agencies relocate to Ward 7.

"The city has to get behind it, it's not enough they just invest in this office tenant, they've got to couple it with good policy and continued support of the development activity that's going to occur," Farrell said. "We needed a first mover, and the city has done that. But now it's important that we continue to incentivize others to look east of the river."

Gray, who served as D.C.'s mayor for four years before returning to the D.C. Council in 2017, said he supports the idea of TIF packages and other incentive deals for development in Ward 7.

"TIF financing is something we should continue to invest in," Gray said. "I think any opportunities available to stimulate business, we should do that."

Many parts of Ward 7, including the Minnesota Avenue area, have been designated as opportunity zones as part of the federal tax incentive program. The latest phase of CityInterests' Parkside project received investment through the opportunity zone program, but Gray said he doesn't think the program has had a material impact on Ward 7 yet.

Gray said he would like to see Bowser continue her initiative and move more District employees east of the river. He also said he hopes to see the federal government, which has a host of expiring leases and often moves to more affordable, emerging markets, relocate an agency to Ward 7.

"With DGS coming there, other agencies too should be moved to areas in Ward 7 and on the east side of the city," Gray said. "That's one of the ways we can invest and have a major impact in bringing more jobs, more people and more amenities, and those amenities would be available to the people in the area."