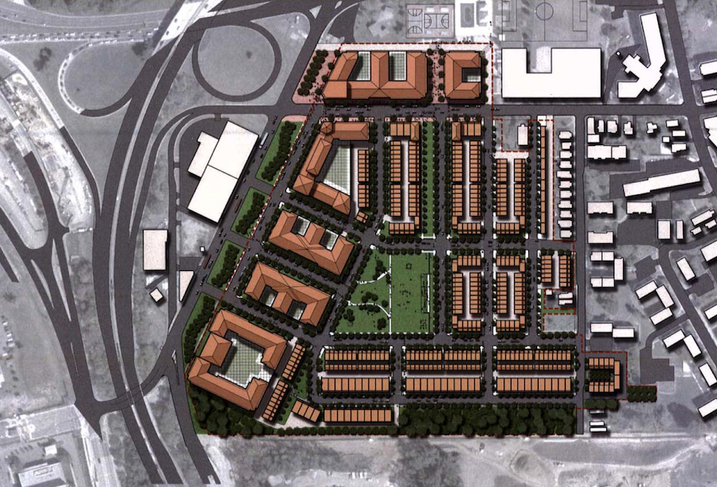 The D.C. Court of Appeals has stripped the approval of one of the largest residential developments in D.C., a major win for activists in the appeal battle playing out across the District.

The court Thursday issued its order vacating the approval of the Barry Farm development and sending it back to the Zoning Commission to restart the approval process.

The ruling, first reported by the Washington Business Journal, is the third time the D.C. Court of Appeals has blocked a Zoning Commission-approved planned-unit development in recent years as it considers an unprecedented string of appeal cases.

The Barry Farm community in Southeast D.C. currently consists of 444 public housing rental units on the roughly 34-acre site bounded by Sumner Road SE to the north, Firth Sterling Avenue to the west, Saint Elizabeths Hospital to the south and Wade Road to the east.

The development, to be built by a partnership of A&R Development, the D.C. Housing Authority and the nonprofit group Preservation of Affordable Housing, is part of D.C.'s New Communities Initiative, which aims to revitalize distressed public housing properties.

The project would feature 1,014 multifamily units and 386 rowhouse, flat and live/work units. It would would include replacements for each of the 444 existing public housing units, plus an additional 280 units would be set aside for households earning between 60% and 80% of area median income.

The Zoning Commission approved the project's first-stage PUD, which outlines overall density and scale, July 30, 2015. The Barry Farm Tenants and Allies Association filed an appeal Aug. 31, 2015. The case went through two and a half years of motions and delays before the court ultimately ruled in favor of the BFTAA Thursday, vacating the project's approval and remanding it back to the Zoning Commission.

In its appeal, BFTAA argued the Zoning Commission came to several conclusions without providing evidence on issues such as the the project's density and number of units, loss of existing amenities and the difficulty of the relocation process. The court found that argument convincing, ruling that the commission did not address all of the contested issues.

"In remanding this case, we are not necessarily holding that the development may not go forward on this site, but rather, are simply requiring that the Commission give fuller consideration to and explain its determinations on the issues that we have identified, in accordance with the zoning and redevelopment regulatory scheme," the court's decision said.

A D.C. Housing Authority spokesperson said it has not yet fully analyzed the court ruling, but is concerned about the impact it could have on the existing residents.

“Our first concern is the impact on the hundreds of people who planned to return to the redeveloped site in 2020," DCHA spokesperson Richard White said in a statement. "Over the last several months, Ward 8 families made the decision to relocate from the Barry Farm community while demolition and redevelopment are underway. These families should not be overlooked or forgotten. DCHA remains committed to the families who desire to return to the new development, which is guaranteed by DCHA policy."

The ruling follows the court's December 2016 decision to vacate the approval for Northwest D.C.'s McMillan development, which remains stalled and earlier this month was appealed a second time after receiving its approvals again. The court has thrice vacated the approval of Brookland's 901 Monroe project after the developer, Menkiti Group, went back to the Zoning Commission and received approvals each time. The court last week vacated the Board of Zoning Adjustment's approval of a 56-unit, mixed-use project in Dupont Circle.

The 901 Monroe and McMillan decisions set off an unprecedented wave of appeals as activists filed suit against more than a dozen developments, delaying thousands of housing units in the process. Some of those appeals have been dismissed by the court or settled between the parties, but at least 13 projects that would create over 3,600 homes currently remain stalled, according to a tracker maintained by the Coalition for Smarter Growth.

Aristotle Theresa, the attorney representing BFTAA in the Barry Farm case, has been involved in at least a dozen Zoning Commission appeals across D.C. since 2015. Theresa did not immediately return a request for comment.

Judge Roy McLeese, who issued the rulings for the McMillan and 901 Monroe case, was also on the three-judge panel for the Barry Farm case.

The D.C. Council is currently considering amendments to the city's Comprehensive Plan that housing advocates say could clear up issues that opponents and courts have seized on to block projects. Hundreds of people testified at a recent hearing over the amendments, with advocates arguing passionately on both sides of the issue.