Success On Tap: 6 Breweries Anchoring Major Developments Around The U.S.

Craft beer production in the United States has nearly tripled over the past decade, and with that rise has come a host of new breweries in American cities. With many of them featuring taprooms and restaurants, these breweries have become valuable anchors for large mixed-use projects. Here are six breweries that anchor major developments across the U.S. 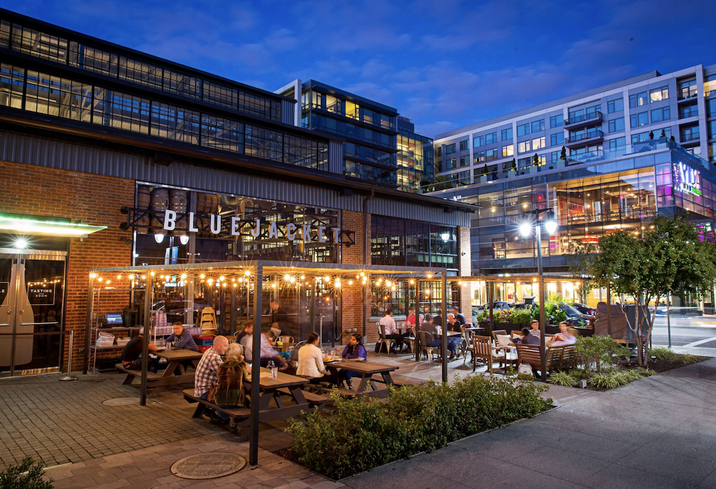 Courtesy: Forest City
The Blue Jacket Brewery has been a major draw to The Yards development in D.C. since opening.

A 48-acre project on Southeast D.C.'s waterfront, The Yards will eventually include 3,400 apartments, 1.8M SF of office and 400K SF of retail, courtesy of Forest City. But when Bluejacket Brewery opened in the development's first building in 2013, that transformation was just getting started.

"At that point Uber was just beginning and taxicabs didn’t come to our neighborhood," Forest City Washington President Deborah Ratner Salzberg said at a Bisnow event in July. "The minute Bluejacket opened, we were on the map. It was really just amazing to me the number of cabs and Ubers that would suddenly come to the neighborhood."

The brewery has 5,600 SF of brewing space on three levels where it brews 20 original Bluejacket ales and lagers. The facility also features a 200-seat restaurant and barroom. 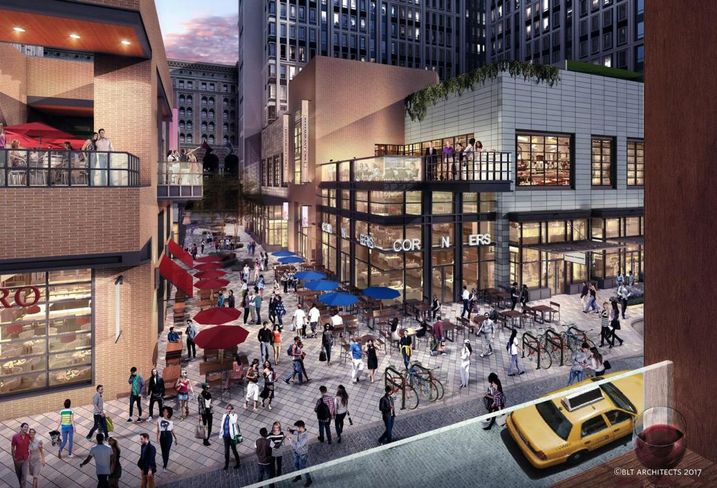 Courtesy of BLT Architects
A rendering of the East Market project

Iron Hill Brewery signed on in February to open in an 8,450 SF space at Philadelphia's $600M East Market development. Iron Hill already has 12 locations, but the Center City brewpub will be its first in an urban hub.

As part of the development's first phase, the brewery is slated to open next year with 130K SF of retail, a 322-unit residential tower and 161K SF of office space. The developer, National Real Estate Development, has also signed Mom's Organic Market for the ground-floor retail and two creative office tenants. 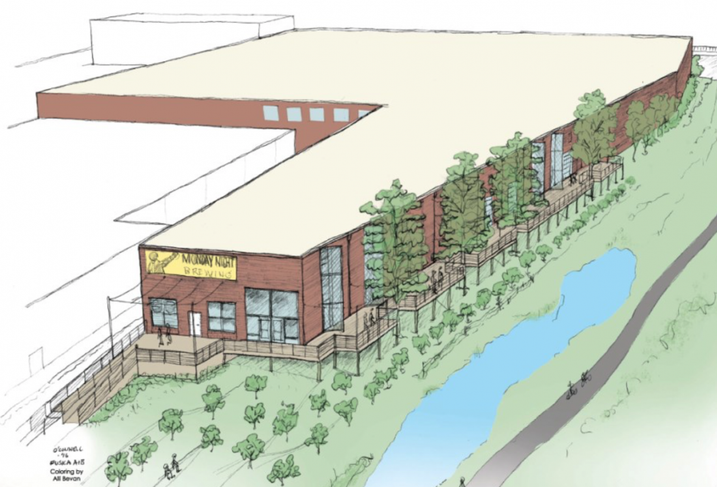 Aiming to transform a 426K SF industrial park into a vibrant food and beverage hub, Stream Realty has signed several other tenants to the development, including two other breweries. Wild Heaven Beer plans to open a 21K SF facility at the development next year. Banyan Roots Brewing Co. signed on in April for an 18K SF brewery, also slated to open next year. The development will also feature a distillery, a kombucha tea taproom and brewery, and gelato and pickle stores. 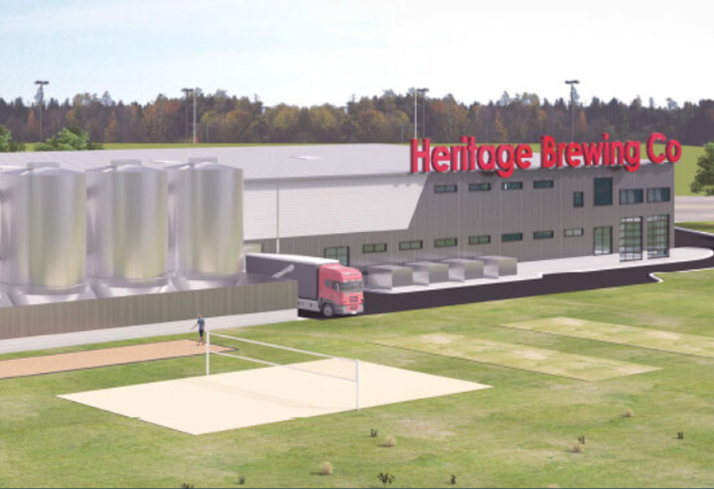 Buchanan Partners
The Heritage Brewing Co. will anchor The Landing at Cannon Branch, a mixed-use development in Manassas.

A 40-acre mixed-use project, The Landing at Cannon Branch is slated to be the largest development in the history of Manassas, Virginia. It will be anchored by Heritage Brewing Co., a four-year-old brewery that signed on this year to move and expand its operations to a 35K SF facility.

The full project is planned to include 270 residential units and a 110-room hotel, plus office, restaurant and retail space. Virginia Gov. Terry McAuliffe in August announced a $250K state grant to aid the brewery's expansion. 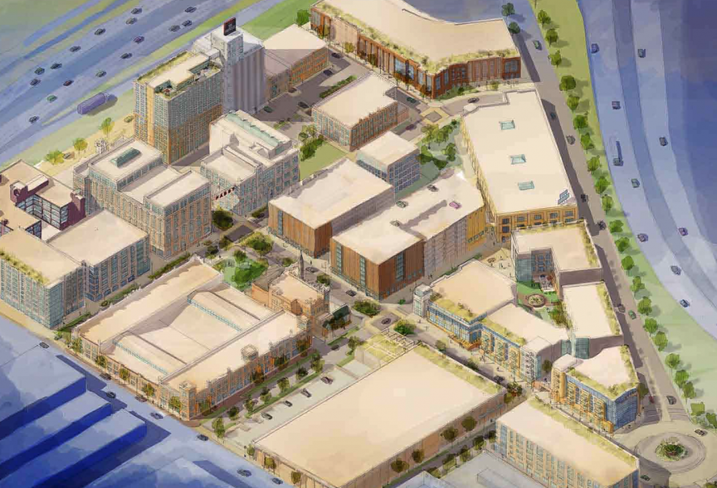 The $100M project, now entering its final phase, will include 800 apartments, two hotels and three office buildings, plus restaurants and two new breweries. The new Pabst Milwaukee Brewery opened in April as part of the development, bringing the brand back to its former home. Milwaukee Brewing Co. last year signed on for a 58K SF craft brewery as part of the development, and is expected to open by the end of this year. 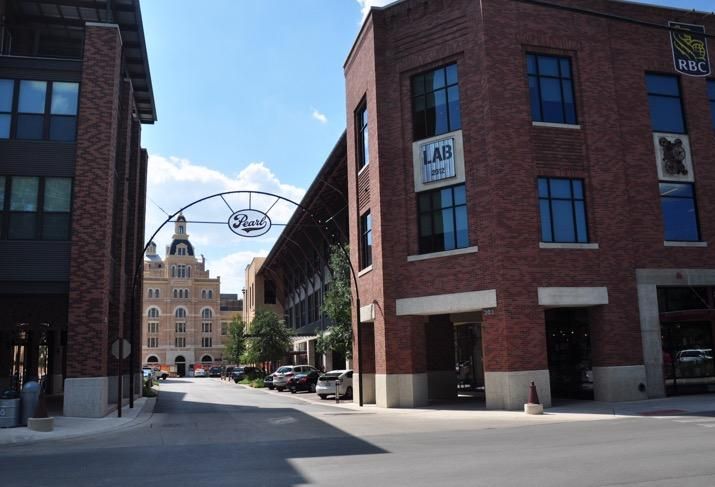 San Antonio's The Pearl Brewery closed in 2001, but Silver Ventures acquired the 22-acre site that year and has turned it into a thriving mixed-use district. The development now features the 146-room Hotel Emma, the 293-unit Can Plant apartment building, a shopping mall and a number of restaurants and bars.

While the development is called Pearl Brewery, the original brewery is no longer in operation. The development has welcomed a microbrewery though, the Southerleigh Fine Food and Brewery.

The success of the Pearl Brewery project has also spawned nearby developments, including one 23-acre project that got approval in July for 100K SF of retail and 300K SF of office space.