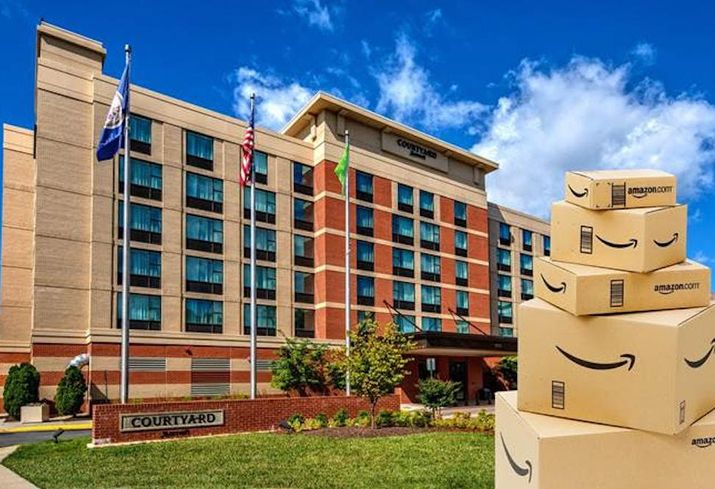 Courtesy: MCR
The new Courtyard by Marriott Dulles Airport Herndon, with Amazon packages in the foreground

The owner of a new Courtyard by Marriott Hotel that just opened next to Dulles International Airport is making no secret about which company it hopes to pull demand from.

MCR mentions the potential of Amazon HQ2 coming to the Dulles area several times in its announcement of the 187-room hotel's opening and shared a picture of the building with Amazon packages in the foreground.

“We developed the Courtyard by Marriott Dulles Airport Herndon with Amazon.com in mind,” MCR Managing Partner Tyler Morse said in a release. “In our hotel, the area’s tech work force will have flexible spaces and free lightning fast Wi-Fi to stream, shop and work online.”

Northern Virginia is widely seen as a front-runner among the 20 finalists for Amazon HQ2 and one of its proposed sites, the 26-acre Center for Innovative Technology campus, sits directly across the Dulles Toll Road from the hotel property. Amazon CEO Jeff Bezos told D.C. business leaders last week the company plans to announce a decision by year-end.

To court potential Amazon employees, MCR renovated a former Sheraton hotel and converted it to the Courtyard by Marriott brand over the last six months. The hotel at 13715 Sayward Blvd. sits directly to the east of the main entrance to the international airport.

The hotel has a restaurant, The Bistro, that serves breakfast, dinner, cocktails, snacks and Starbucks coffee. It also has a 24-hour fitness center, a business library, meeting space for up to 90 people and a free airport shuttle.

MCR is the sixth-largest hotel owner in the U.S. and has invested in or developed 104 properties totaling over 12,000 rooms. Its latest project continues the trend of investors sprucing up hotels near airports that has occurred in cities like D.C., New York, Los Angeles and Vancouver.