BIDding War: At Least 5 New BIDs In The Works Across D.C.

Growing neighborhoods throughout the District are looking for new ways to foster activity and bring people in, and they are increasingly turning to business improvement districts to help them compete. 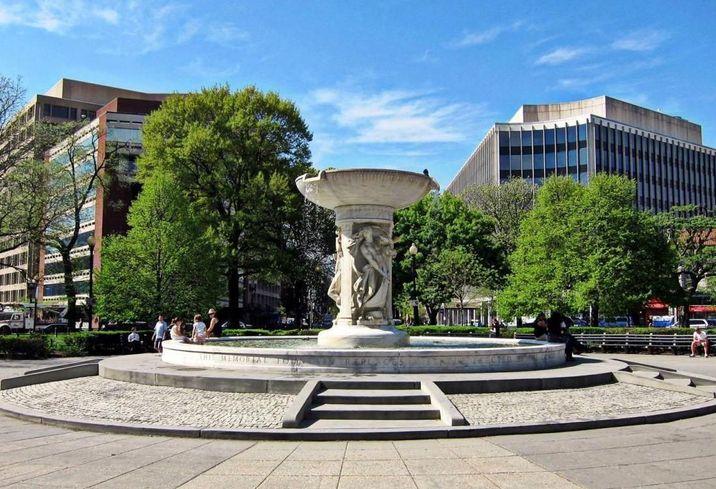 At least five groups from Ward 1 to Ward 8 are in varying stages of the process to form BIDs or similar organizations that will support commercial activity.

There are currently 10 active BIDs in D.C. The most recent groups to launch were the Southwest BID in 2015 and the Anacostia BID in 2012, and before that no BIDs had been created since 2007.

The next BID to launch will be the Dupont Circle BID, which received approval from the D.C. Council and Mayor Muriel Bowser in recent weeks and plans to begin collecting revenue in the fall.

Longtime Dupont Circle property owner Michael Kain, who spearheaded the creation of the BID, will become the organization's president. He said a primary reason for creating the group was to eventually maintain a park the city plans to build on the Connecticut Avenue overpass on the northern side of Dupont Circle. 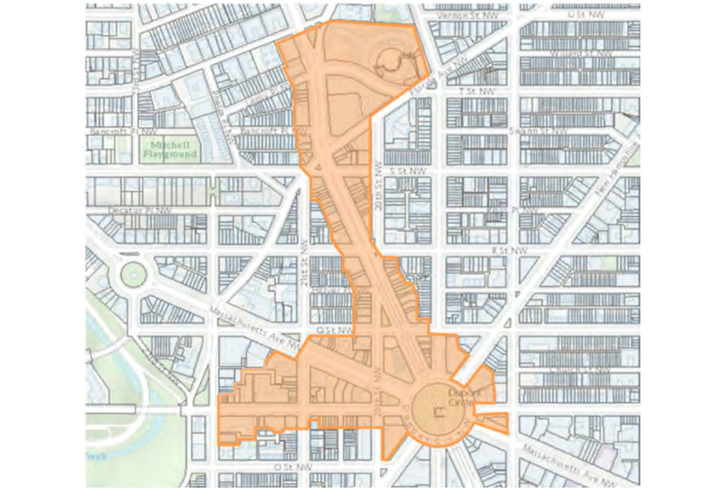 The BID's executive committee will consist of JBG Smith's Kathy Guy, Saul Urban's Dan Rigaux, Firehook co-founder Pierre Abushacra and others. Its boundaries will stretch along P Street and up Massachusetts and Connecticut avenues, just north of the Golden Triangle BID.

The Dupont Circle BID will collect 0.09 cents per $100 of assessed value from office and retail buildings, $120 per room from hotels and $120 per unit from residential properties, according to its business plan. Its annual budget will total $1.1M for Fiscal Year 2019. That will make the BID the eighth-largest of the 11 in the city when it officially launches. The Downtown D.C. BID had the largest budget in 2017 with $11M, and the Anacostia BID has the smallest with $235K.

"Dupont Circle was the most exclusive commercial part of Washington at one time, and we'd like to try to bring that back again and make it a much more pleasant experience for the residents and visitors," Kain said. 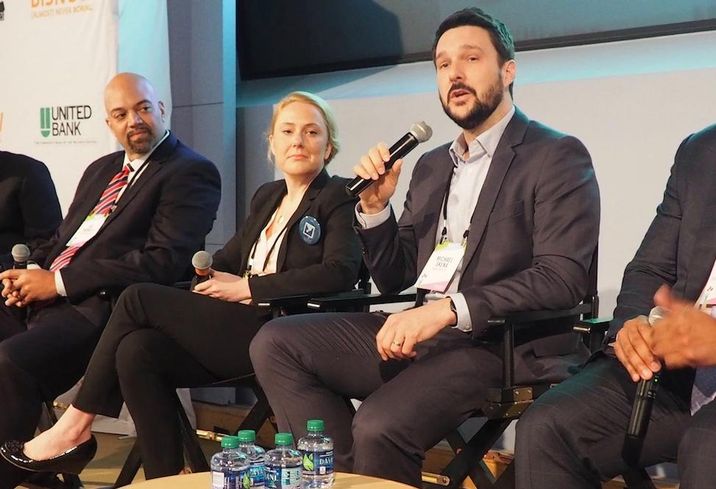 The group in its most nascent stages is the Greater Brookland BID. A collection of property owners and business owners around the Northeast D.C. neighborhood has come together over the last year to explore the creation of a BID.

Rhode Island Avenue Main Street, in conjunction with several Brookland-area developers and businesses, received a grant last year from nonprofit community development organization Local Initiatives Support Corp. to study the feasibility of a BID. The group used the money to retain Jon Stover & Associates to conduct a preliminary study, which found that there is enough commercial development in the area to support a BID.

The BID's boundaries would stretch roughly from Michigan Avenue and the Brookland Metro Station to the north and the Rhode Island Avenue Metro station and the Giant-anchored Rhode Island Place shopping center to the south. Its western boundary would be near the Rhode Island Avenue Shopping Center, a property at Fourth Street NE that MRP Realty plans to develop, and it would stretch eastward to include Brookland Manor, the housing complex at 14th Street NE that MidCity is working to redevelop.

The Greater Brookland BID would include Brookland and parts of Edgewood, Eckington and Brentwood, so MRP Realty's Michael Skena said it aims to create a unified identity.

"We are coming together under one brand to jointly market this area and make it competitive from a retail perspective and a business perspective," Skena said. "D.C. is becoming a more competitive retail and small-business marketplace, so we want to make sure the great attributes of these neighborhoods are all on display and people know about them."

The group is now meeting with community members and local business owners to discuss the idea and get feedback. It must secure signatures from the owners representing at least 51% of the assessed value of eligible properties before being considered by the D.C. Council. Skena said it hopes to have a bill submitted to the council by August 2019 at the latest.

"We want to do it right and make sure we talk to everyone we need to talk to and that everyone has a chance to weigh in," Skena said. "We also don't want to lose momentum. We're going to continue going as quickly as we can." 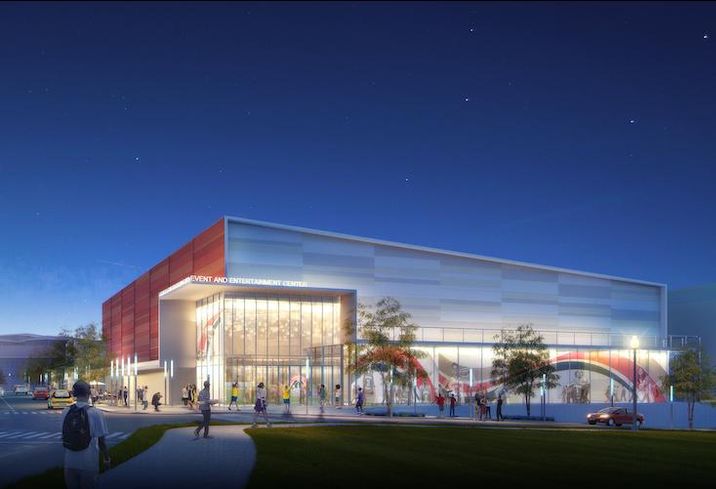 Courtesy: Events D.C.
A rendering of the Entertainment & Sports Arena on the St. Elizabeths east campus

In Ward 8's Congress Heights neighborhood, community leaders had been exploring the possibility of forming a BID last year. They have since concluded that they would not have enough revenue from commercial property owners to support an official BID, and have instead pivoted to create a nonprofit group, said Monica Ray, who spearheaded the efforts.

The group, to be named Congress Heights Partnership, will function like a BID but will solicit voluntary contributions. It has a pending 501(c)(3) application and plans to begin collecting contributions in August.

Ray, the executive director of Congress Heights Community Training & Development Corp. and the chair of Destination Congress Heights, will lead the group until it elects its 19-member board. She said the development of the new sports arena, where the Wizards will practice and the WNBA's Mystics and Wizards' developmental team will play their home games, was a primary reason for creating the group.

"One of the the things we are really concerned about is making sure the experience of a new arena coming isn't one where a visitor jumps on the Metro and goes back home," Ray said. "We want people to understand Congress Heights is a place to come to shop, to have dinner and be entertained."

Congress Heights was one of five communities that received a collective $300K in Emerging Business Improvement District grants from Bowser in 2016. The others, in addition to Dupont Circle, were H Street, Shaw and MidCity, which includes the U Street and 14th Street corridors. 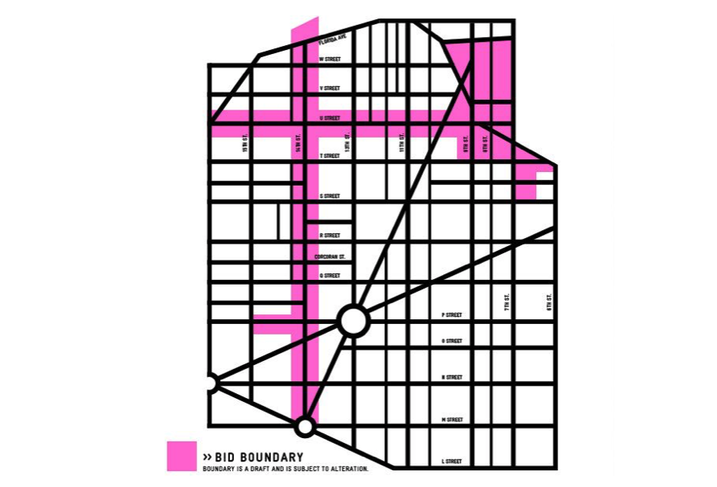 MidCity BID
The proposed boundary for the MidCity BID

The MidCity group has released a detailed business plan that pegs its budget at $986K. The group would tax commercial buildings at 0.11 cents per $100 of assessed value, hotels at $90 per room and multifamily buildings at $120 per unit.

The group has been collecting signatures and hopes to launch by spring 2019, Cork Wine Bar founder Diane Gross said in a February interview. The BID would focus on cleaning and enhancing the streets, hosting events and branding the neighborhood. Gross said it also aims to support daytime activity and businesses that serve the neighborhood to complement the area's booming nightlife scene.

"We wanted to focus the BID on marketing, beautification and advocacy for businesses to develop a stronger 18-hour-a-day life for the neighborhood, so retail and restaurants and nightlife are all really thriving," Gross said. "To coalesce the neighborhood and bring it together under one vision would be a great idea. That's the genesis of why we wanted to do it."

Shaw Main Streets, a 14-year-old group that supports neighborhood businesses, is working to transition itself into a BID. Its budget would be over $1M, roughly double the group's current spending power, Shaw Main Streets Executive Director Alexander Padro said. This would allow it to perform more cleaning and security services and do more promotional efforts for businesses.

The BID would extend south to the Downtown D.C. BID and Mount Vernon Triangle Community Improvement District borders and meet the potential MidCity BID to the north. Padro said it is currently in the outreach process and hopes to file its application in the next 12 months and receive approval in 2019.

"All of our major property owners have been very eager to see the kinds of services we're looking to provide, and business owners are eager for anything that brings them more customers," Padro said.

The final group to receive an Emerging BID grant, H Street Main Street, does not have any information about a potential BID on its website. The group's executive director, Anwar Saleem, did not respond to requests for comment.

H Street Main Street organizes the annual H Street Festival, the 11-block party that draws over 150,000 people. It also promotes businesses in the area and has been involved in planning a potential redevelopment of the Hechinger Mall.

The emergence of several new BIDs has been sparked in part by the success of the first wave of BIDs, Skena said, which has made business owners and residents more receptive to the idea.

"Folks understand BIDs now," Skena said. "It's not a new thing, so they understand when they go to Capitol Hill or the riverfront and see the flags and clean and green teams. They understand the services a BID provides and can see it translating into more success for their businesses."