Washington is one of only four states in the country to define residential construction as nonessential during the novel coronavirus crisis. 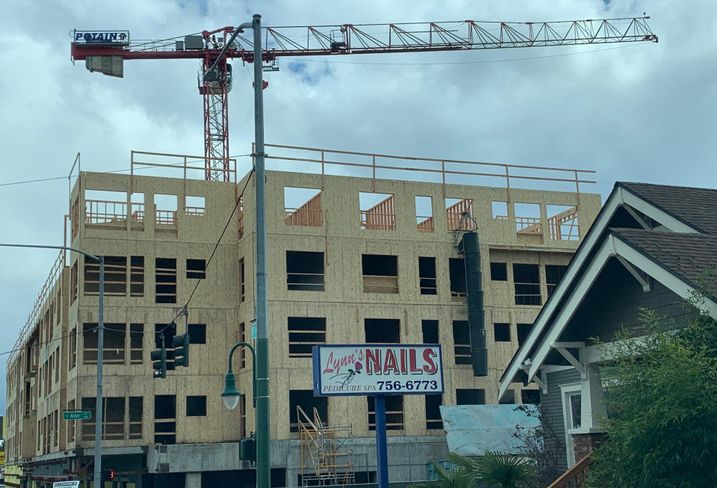 Bisnow/Shawna De La Rosa
Construction on this multifamily development on Sixth Avenue in Tacoma was shut down on March 25 due to concerns over the spread of COVID-19.

Because of social distancing rules already put in place, Washington state is beating coronavirus predictions. The state passed its peak on April 2, 10 days earlier than was predicted, according to statistics issued by the University of Washington’s Institute for Health Metrics and Evaluation.

It also now estimates that Washington will not run out of ventilators or intensive care beds and decreased the estimated mortality rate from 978 to 632.

The progress has come at the cost of a sudden spike in unemployment. In Seattle, the downtown core’s offices emptied as early as March 4, when many companies told employees to work from home. By March 16, 83 customer-facing businesses in downtown Seattle had closed. That was just the beginning.

Some public-private partnerships can continue construction, such as work on the $958M Seattle Center arena, but almost all other projects in the state have closed.

In a letter obtained by Bisnow, Peggy Lewis Fu, executive director of the Washington state chapter of NAIOP, urged Inslee to reconsider not allowing residential construction to continue. The letter points out the Department of Homeland Security’s guidance on residential construction states that workers building additional units the combat the nation’s existing housing supply is considered essential.

In a press conference last week, Inslee warned businesses that if they failed to comply with the closures they could face penalties or loss of business licenses, though they would receive a warning first.

Warren Hughes, who runs a multifamily construction business in Arlington, said the situation will become financially devastating for many in the industry in a few weeks.

“The virus is something to be taken seriously,” he said. “But this industry lends itself to not working in close proximity. We typically follow suit with California, and they did not shut down residential construction.”

Hughes said if the residential construction is forced to shut down too long, many construction companies will struggle, especially those with loans out.

Vibrant Cities CEO and co-founder  James Wong doesn’t expect Inslee to change his mind and open construction up any sooner than May 4.

“Our goal is for it not to extend beyond May 4,” he said.

Wong does, however, see reasons for optimism. His friends in China have told him business there is almost back to normal after a 60-day lockdown.

“I look at China as an indicator of what we can expect here,” he said. “Life will get back to normal here just as it did in China.”

Wong also believes that the $2 trillion stimulus package and the Paycheck Protection Program will help companies weather the storm.

“I am a great believer that the stimulus money will be a great booster to our economy,” he said. “We didn’t have any fundamental big issues with our economy before COVID-19. It will take a little bit to boost back our consumer confidence, but that’s where the government’s stimulus package should help.”