On Monday evening, Gov. Jay Inslee ordered all Washingtonians to stay at home unless they work in an essential industry. What constitutes essential, however, remains unclear. 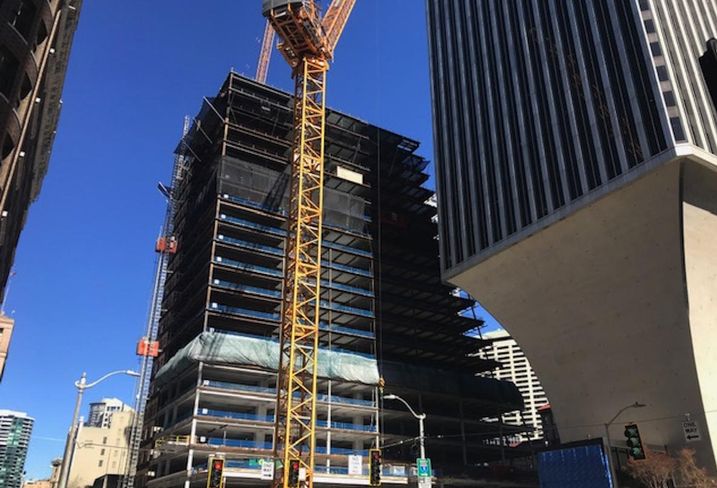 Bisnow/Shawna De La Rosa
Some commercial construction will be allowed to continue, but the rules are still unclear.

A spokesman for the Associated General Contractors of Washington said the organization is still trying to clarify the directive.

Pine Street Group Managing Partner Matt Griffin is unsure whether or not construction will be able to continue on the Washington State Convention Center. Meanwhile, Vibrant Cities co-founder and CEO James Wong said construction continues on his firm’s residential projects.

“The governor, so far, has deemed residential construction as essential so our job sites have not stopped yet,” he said. “It’s day by day for us to see what is acceptable to do.”

In New York, construction was temporarily halted on two infrastructure projects after workers were diagnosed with COVID-19. There, some city council members are calling for a more narrow definition of essential construction.

“The big question will be whether it ripples into the office side,” he said. “This will have a major impact on hotels and they will take a while to recover. Does the ripple continue?”

Seattle was the first American city to be hit by the novel coronavirus, and then the first to feel the economic impacts, Scholes said. Seattle’s vibrant downtown slowed to a crawl as early as March 4, when tech giants Amazon, Google and others told employees to start working from home in an effort to thwart the virus’s spread.

As of March 16, which was the day Inslee ordered bars and restaurants to close, at least 83 customer-facing downtown businesses had closed, six as a direct result of the impact of the virus, according to figures from the Downtown Seattle Association.

“The jobless claims are staggering and will only get more severe in the coming weeks,” Scholes said.

In the week ending March 8, King County unemployment claims increased 218%, according to the Washington State Employment Security Department. Food services represented the highest percentage of new claims, up 597%; educational services claims were up 560%; arts, entertainment and recreation claims were up 256%; and people age 34 and younger are the hardest hit.

The newly formed group #allinseattle has already raised $27M to provide immediate assistance for those impacted by COVID-19. The Downtown Seattle Association will hold a webinar Friday that will discuss the impacts of the coronavirus on downtown and what measures are being taken by federal, state and local authorities to provide relief to affected businesses.

“Kudos to the great Seattle-area leaders that have stepped up to do this,” Scholes said. “But it’s not going to be enough. This problem is only going to get deeper. We need major federal action beyond what’s been done. We are going to have to have several more votes and packages that can keep people on the payrolls and prevent layoffs and furloughs.”

Scholes said he believes if small businesses are allowed to fail, there will be fewer jobs to go back to when this is over and the economy will struggle to restart.

“If we go into economic hibernation for the next month, people still need to be taking paychecks so they aren’t losing their homes,” he said.