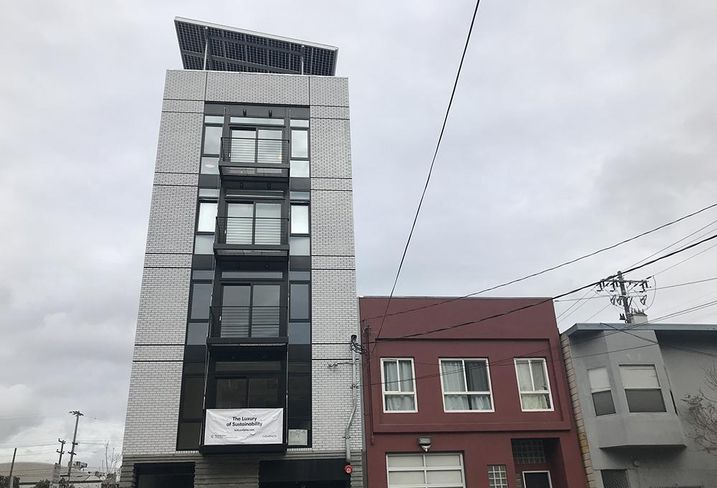 The solar panels in Sol Lux Alpha create enough energy, which can then be stored in batteries, to power the building for extended periods, Off The Grid Design CEO and principal John Sarter said during a tour of the property. Each 1,800 SF condo uses 80% to 90% less energy than a traditional house. Homes are priced at about $2M to over $3M.

Sol Lux Alpha, at 685 Florida St., is one example of how developers are trying to create more sustainable and resilient buildings in San Francisco. One of the biggest examples of sustainable buildings in the city is Salesforce Tower, which will have the city’s first blackwater recycling system. Moscone Center's renovation transformed it into one of the most sustainable convention centers in the country.

Passive house is not a typical sustainable build. The construction standard creates buildings that use as little energy as possible to maintain a comfortable temperature inside the building. That typically is done by creating airtight walls and windows, adding quality insulation and providing proper ventilation.

The approach originated in Germany in the late 1980s and has started to creep into U.S. buildings in recent years. Bernstein Real Estate started construction on a 55-unit, 24-story passive house condo building in New York in October. One of the first multifamily buildings with passive house certification in the country was built in 2014 in Portland, Oregon.

At Sol Lux Alpha, passive house certification meant shoring up any air leaks at joints or the edges of surfaces, according to Sarter, who developed the property.

“It is not a [U.S. code] standard in construction right now, but the result is profound,” Essential Habitat principal Graham Irwin said.

Essential Habitat is a consulting and design firm that worked on passive house elements at Sol Lux Alpha.

Irwin said the air inside a passive house is much cleaner and the inside is much quieter. He said instead of a standard mechanical air system, passive house construction uses controlled ventilation that distributes fresh air constantly throughout the building instead of redistributing the same stale air.

Sarter said he plans to build any future projects using passive house standards, and what this building provides is just a tip of the iceberg in terms of the benefits of microgrids, passive house and zero net energy. Since very few buildings have passive house certification, having this example may create better awareness of the benefits to San Francisco, according to City and County of San Francisco Distributed Energy Resources Specialist Jennifer Tse.

“Hopefully one day [passive house] will be the standard,” Tse said.

The city offers various programs to multifamily building owners, such as access to Property Assessed Clean Energy, or the PACE program, to provide financing for solar and energy efficiency projects, Tse said.

The city offers an online tool for building owners to input energy data and see what kinds of solar energy and battery storage would be needed to keep a building powered for extended times during an outage.

The Beginning Of A Self-Sustaining Neighborhood? 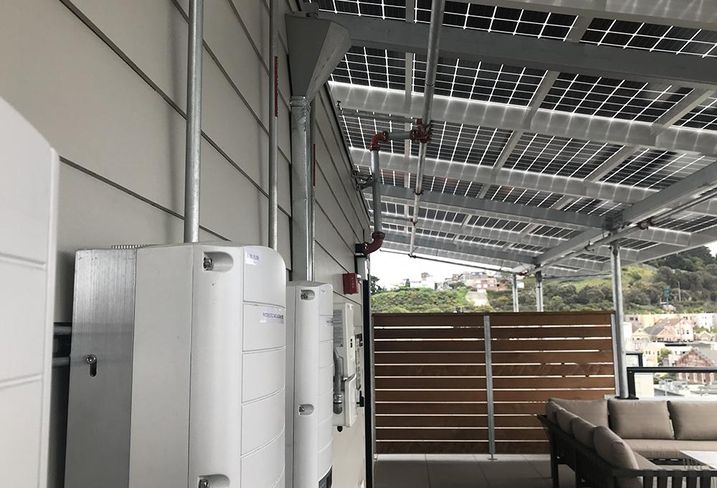 Another benefit of buildings that create positive net energy is they can be the start of what could be a communitywide microgrid, but San Francisco has a long way to go in creating energy-efficient neighborhoods. A microgrid is a small group of energy users that use their own sustainable power source and can function independently of a large central energy grid.

Taking the extra step into solar and battery storage has not been easy. Tse said the city powers its buildings using power from Hetch Hetchy, which is very cheap.

She said her department has been trying to transition into solar power plus storage, but the cost has been too high. Her department is now working on creating an economic analysis of what the societal benefits are to present to the capital planning commission.

Thomson said the biggest challenge is how to create a societal value for microgrids.

“We need to value it like we value stop signs and guardrails,” he said. “We have to value it as local energy.”

CORRECTION, APRIL 20, 9:34 P.M. PT: A previous version of this story did not have the range of prices for the condos and details on the solar arrays used to power the building. The story has been updated.