San Francisco’s only new office building in North Financial District is almost ready. 350 Bush is shifting to tenant build-outs, signaling the end phases for a 360K SF building that took over 40 years to develop. Twitch will soon occupy 185K SF, and another tenant is expected to move in above Twitch’s space. 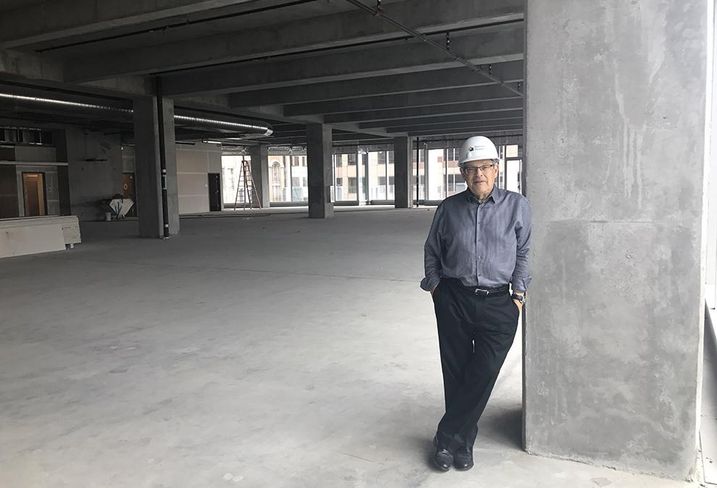 For Heller Manus Architects President Jeffrey Heller, who designed 350 Bush, watching buildings he designed being constructed is one of the most exciting parts of his job.

“I’m lucky to have three important buildings going up at the same time, especially this late in my career,” Heller said. “I’m pleased with the way it is all coming together.”

Heller’s firm also designed 181 Fremont and 505 Brannan, which are both under construction. 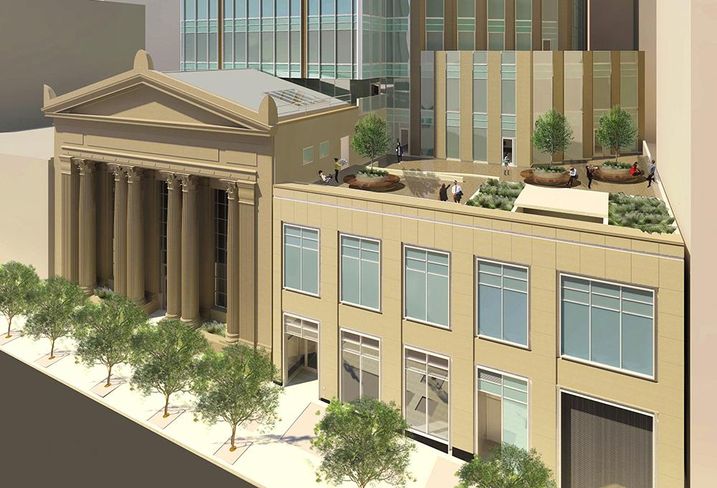 350 Bush was among the more challenging projects the firm designed. The site, which contains the landmarked Mining Exchange building, previously sat fallow for decades following a long-held battle between the land’s original owner, Walter Shorenstein, and the city. Following approvals for an office on-site in the early 2000s, the building took another 15 years, two different owners and two economic cycles to get built.

350 Bush, now owned by Lincoln Property, also underwent a more stringent review process. Because the city designated the Mining Exchange building as a historical landmark, construction was allowed around, above and under the building but not on it. The tower, which was built by Hathaway Dinwiddie, had to be raised into the air so crews could dig 30 feet underneath for the foundation of the new office building. 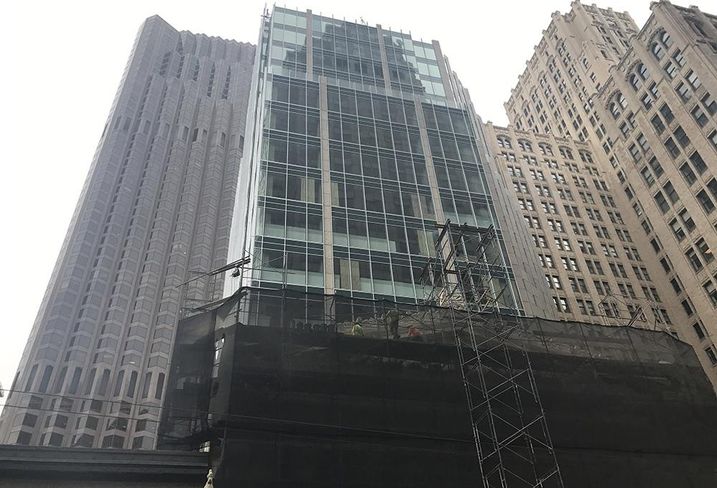 Julie Littman/Bisnow
Crews work on the finishing touches of the facade of the Mining Exchange building at 350 Bush. Scaffolding will be removed in September. 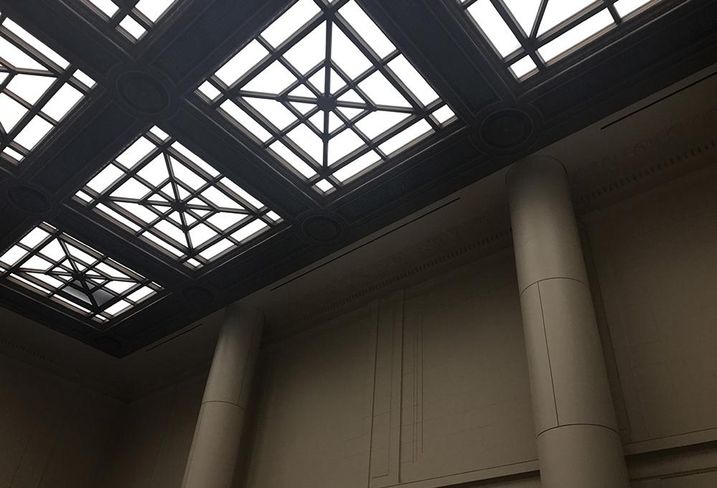 Julie Littman/Bisnow
The ceiling inside the Mining Exchange building was fully restored.

The ceiling was redone and an artist hand-painted the intricate designs on the ceiling. The ceiling's original light fixtures were left intact. The city originally wanted wood flooring in the building, but the architect was able to negotiate marble flooring that looked like wood. The Mining Exchange building will be used as an event and socializing space. 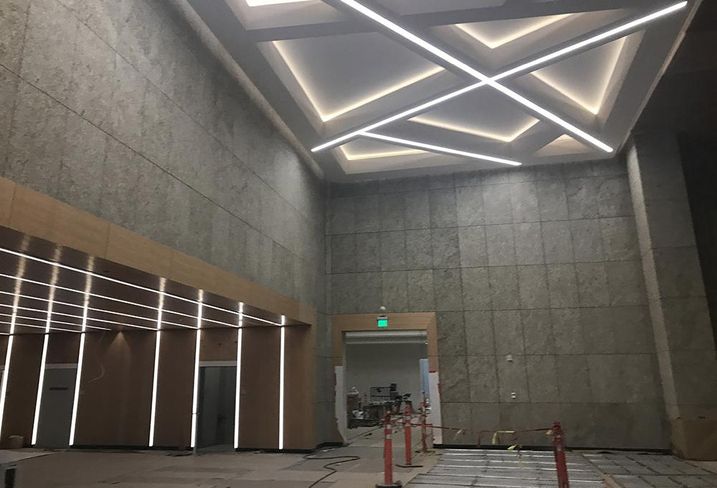 Julie Littman/Bisnow
The lobby of the new building at 350 Bush leads into the 19 floors of office.

New construction includes a lobby and 19 floors of open-space office. The lobby ceiling is a modern twist on the original ceiling of the Mining Exchange building. 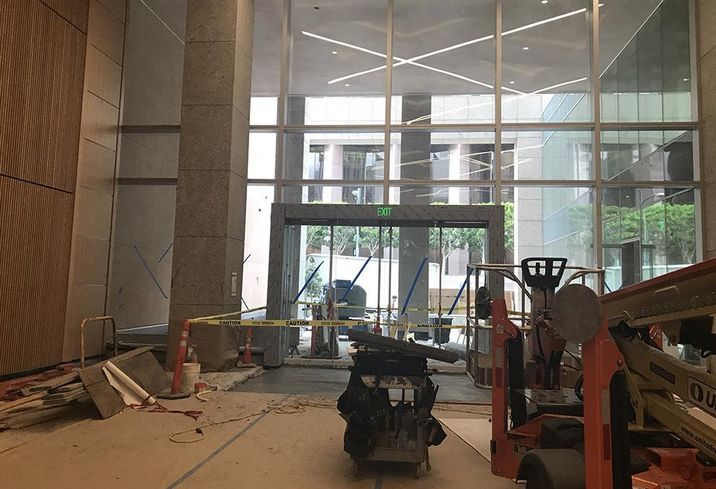 350 Bush is a rare through-block building offering entrances on Bush and Pine streets. The entrance on Pine Street leads into the new building that houses the offices. 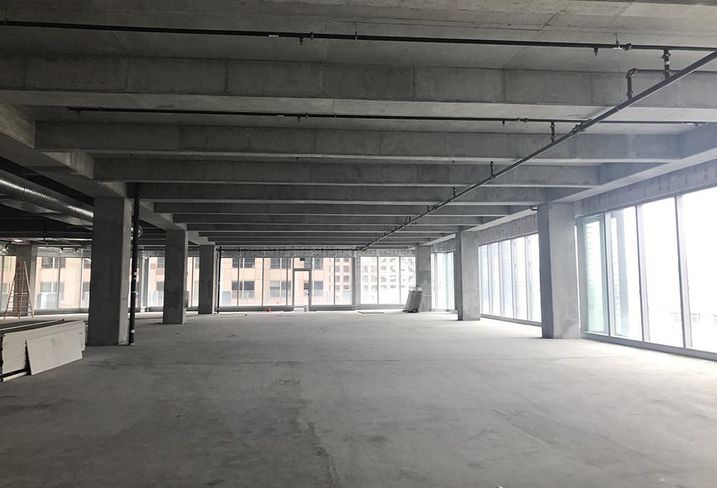 The tenant floors feature concrete construction, since that was what the market demanded, according to Heller. The 13th floor also offers terraces since it is a transition floor before the building narrows. 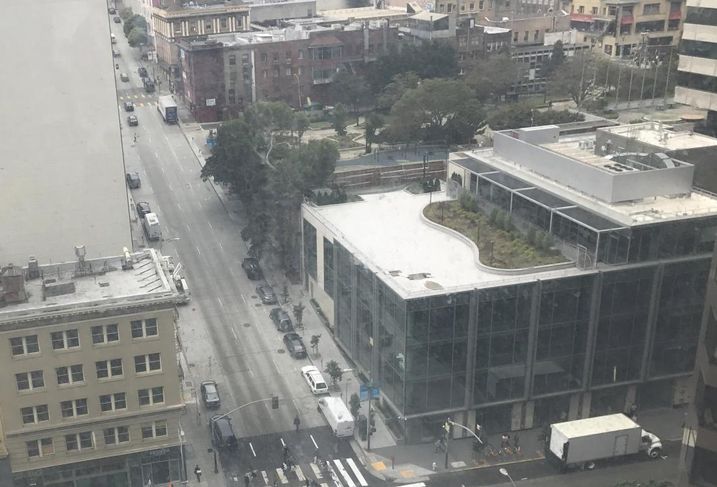 Julie Littman/Bisnow
The park at the project's sister building at 500 Pine St.

A park also was built at an adjacent parcel at 500 Pine St. as part of a deal with the city to build additional square footage at 350 Bush. 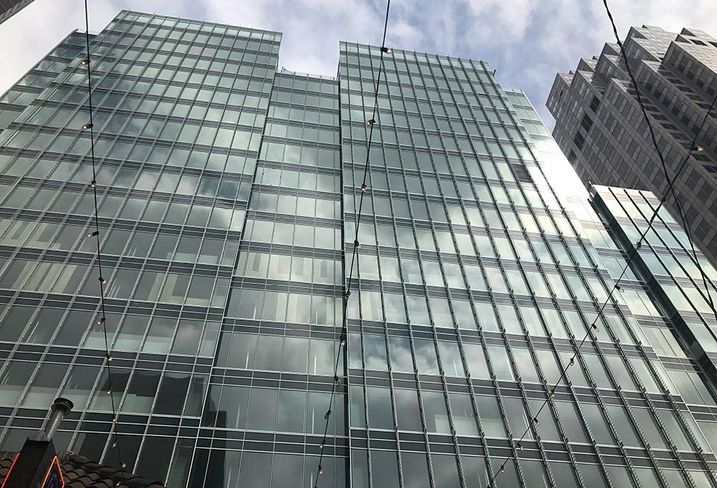 Bisnow Archives/Julie Littman
The western side of 350 Bush St.

The western-facing side of the building features wings along the windows to keep the sun glare to a minimum.