The Platinum Triangle, Angels baseball, Ducks hockey and Disneyland's Star Wars-themed land. Anaheim is coming up, and for those seeking luxury accommodations, a new hotel will open next year.

Come spring 2020, a JW Marriott will bring the newest four-diamond luxury hotel to Anaheim. This will be the first JW Marriott in Orange County and Anaheim's third four-diamond hotel. The other two are The Walt Disney Co.'s Disneyland Hotel and Disney's Grand Californian Hotel and Spa. 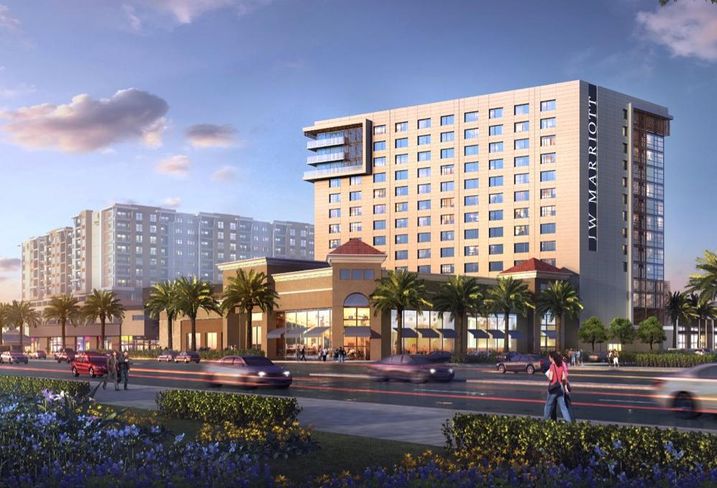 Just two blocks away from the Disneyland Resort and the Anaheim Convention Center and adjacent to the GardenWalk outdoor shopping center, the 12-story, 466-room JW Marriott will feature 45K SF of meeting space, a rooftop bar with views of Disneyland's nightly fireworks show, an outdoor meeting space, a Zen garden, a yoga studio and a fitness facility.

"Anaheim is more exciting today than it has been since Walt Disney came to town and built Disneyland," O'Connell Hotel Group Chairman Bill O'Connell said. "Aside from Disneyland and Disney California Adventure, there's the [Anaheim] Angels and [Anaheim] Ducks and now we're seeing a lot of expansion and older motels being redeveloped."

Disneyland is opening its much-hyped Star Wars-themed land called Star Wars: Galaxy’s Edge this summer. The 14-acre, $1B section of the park will feature two rides, including a Millennium Falcon attraction, and Star Wars-themed retail and restaurants.

Developers are continuing to pour money into The Platinum Triangle, where the Los Angeles Angels baseball team and Anaheim Ducks play, and a pipeline of $1.5B in development, including condominiums, apartments, offices, retail and a hotel.

The Convention Center completed an expansion a couple of years ago. The GardenWalk recently sold and will undergo a repositioning, and more projects, such as the $450M LT Platinum Center, will soon break ground.

But despite so much momentum, there are lingering labor issues that will affect hospitality.

Voters recently passed Measure L, which requires Anaheim hospitality and other businesses that receive a city tax rebate to pay their employees a minimum wage of at least $15/hour starting this year that will increase to $18 by 2022. 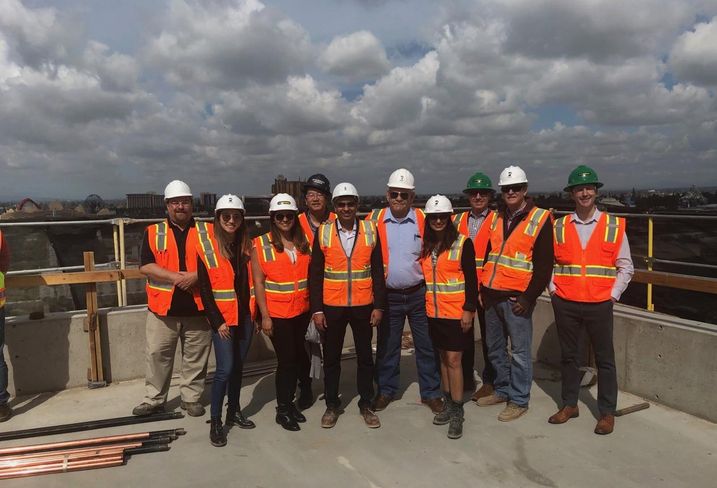 The measure will likely eat in to the hotel's operating costs. O'Connell and Prospera Hotels President and CEO Ajesh Patel declined to comment on Measure L's impact on their business. Wincome, which broke ground on a Westin Anaheim before the vote, has put its second planned hotel on hold following Measure L's November approval. Disneyland canceled its agreement with the city ahead of the vote last year.

"These hotels were built under a business model that did not include the wage rate under Measure L," Anaheim Chamber of Commerce spokesman Jeff Flint told Bisnow. "While it's up to the owners and operators of the hotel to measure the impact, we know that the two [other] pending hotels under the original agreement are at serious risk of cancellation because of the higher wage rate. The chamber is concerned that this will ultimately lead to the cancellation of the second Wincome hotel and GardenWalk hotel and the city really needs those luxury hotels to be built."

Bisnow spoke with O'Connell and Patel about the opening of the new JW Marriott, the sale of the GardenWalk and other happenings in the city.

Bisnow: First off, congratulations on the topping off. How is construction going? What's the status of the development?

Patel: We are at full height and have all of the concrete floors complete. ... We're targeting an early 2020 opening — maybe a March or April time frame. We're focusing on drywall and painting and the lower floors. You're going to see the crane come down in the next month or so. It's definitely an exciting time for the project, and we still have a lot to do. 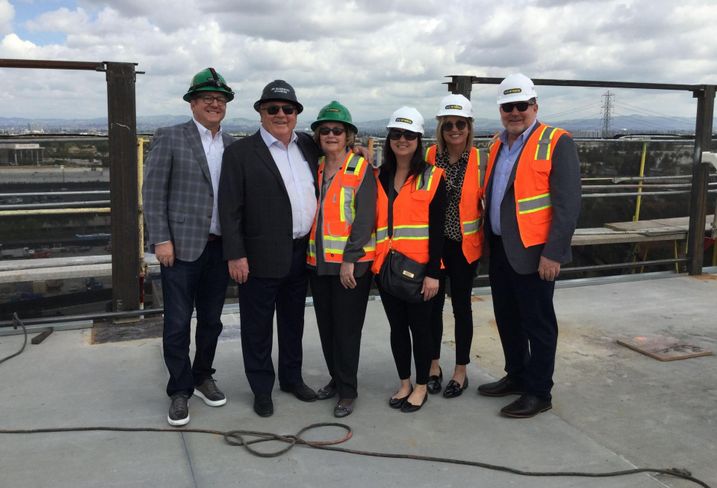 Courtesy of Bill O'Connell
O’Connell Hotel Group Chairman Bill O'Connell (second from left) and his team celebrate the topping off of the JW Marriott Anaheim.

Bisnow: Talk about the state of the hospitality industry in Anaheim. There are a lot of things going on. Why are you so bullish on Anaheim and your project?

O'Connell: You see everything that's going on at Disneyland. We [also] have the Angels, Ducks, the greatest convention centers in the nation. ... Now with the new leadership who are pro-business and pro-resort, we're going to get a lot of great things done.

Patel: The reason why we have so much faith that a four-diamond luxury hotel will perform in this market is just what Bill had alluded — you have the convention center that recently expanded. As a result of that, you have higher-end conventions that are looking into the market like the medical and pharmaceutical conventions. The [city] didn't really have a luxury offering. ... There are a lot of people that want to stay in higher-end hotels but are not able to find accommodations with the existing inventory, I think the JW will fill that gap.

Bisnow: What are your thoughts on the recent sale of the Anaheim GardenWalk? Historically, that retail center has struggled. Are you working with the new owners to have that same type of synergy like the JW Marriott next to LA Live?

Patel: We've met with the owners. They've done a lot of retail. We've seen some of their plans. We're excited that there is new ownership involved and they are putting dollars in and [attracting] new tenants. We haven't see all of their full plans with re-tenanting and everything they are working on. But, it's important that if we're building a luxury product, there are luxury offerings. We're excited and we're hoping that with new ownership that they'll have higher-end experiences.

O'Connell: We're encouraged that they have several tenants that are doing tenant improvements and getting ready to move in. We feel the JW Marriott will be a big asset that will contribute to their success.

Bisnow: What kind of impact will Star Wars land have on the city's hospitality industry?

Patel: Huge impact. [laughing] When Disney California Adventure was revamped and introduced Cars Land, the market saw a sizable demand increase across the board. Star Wars is a larger expansion than that and frankly, has a much more loyal following because they've been around longer. We think there is going to be a pretty sizable impact on the market in a positive way and very excited for [Galaxy's Edge] to open.