When Pendulum Property Partners and Long Wharf Capital LLC acquired the Stadium Crossings mixed-use commercial property in Anaheim in December, it signaled the demand, growth and potential of the city's Platinum Triangle area.

The JV of Pendulum and Wharf Capital purchased the 165K SF mixed-use site at the intersection of Katella Avenue and State College Boulevard for $46M in an auction. The site consists of office space and retail and sits about a block away from Angel Stadium. 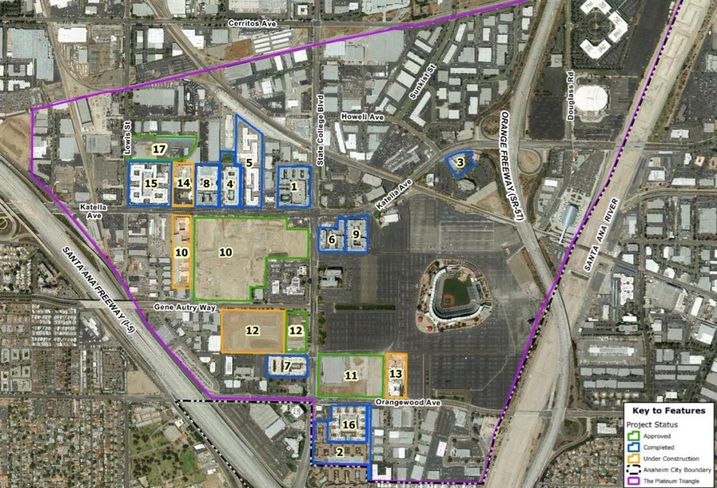 City of Anaheim
Anaheim Platinum Triangle projects as of January 2018

Pendulum Property made the move because it is bullish on the area, partner Brian Walker said in a December news release. The JV plans upgrades to the site.

Once an industrial hub, the 820-acre Platinum Triangle has seen a tremendous amount of growth since 2004 when the city changed the area's zoning. The city is positioning itself as Orange County's downtown area.

With Angel Stadium, Honda Center (the home of the Anaheim Ducks), the ARTIC transportation hub and Disneyland and the Anaheim Convention Center within a couple of miles, developers continue to come in and invest in the area.

More than $1.5B is being spent on building condominiums, apartments, offices, retail and a hotel, according to city staff.

When fully built-out in the coming decades, Platinum Triangle will have 28,000 residents, 19,000 apartments, 14M SF of office space and 4.7M SF of commercial retail and hotel space, staff said.

Six major projects are under construction, including the $500M 43-acre A-Town Metro. Other developments in the pipeline include the $450M LT Platinum Center, a development similar to LA Live, next to Angel Stadium.

“The Platinum Triangle has experienced tremendous growth in recent years," Pendulum Property's Walker said in a news release. "It is now home to over 4,000 multifamily units and a very healthy and diverse commercial tenant base. Stadium Crossings is well positioned to capitalize on this continued growth due to its strategic location at the corner of Katella and State College, access to transportation, and proximity to regional draws such as Angel Stadium and the Honda Center."