'We Were So Rigid': Office Owners Forced To Embrace Flexibility 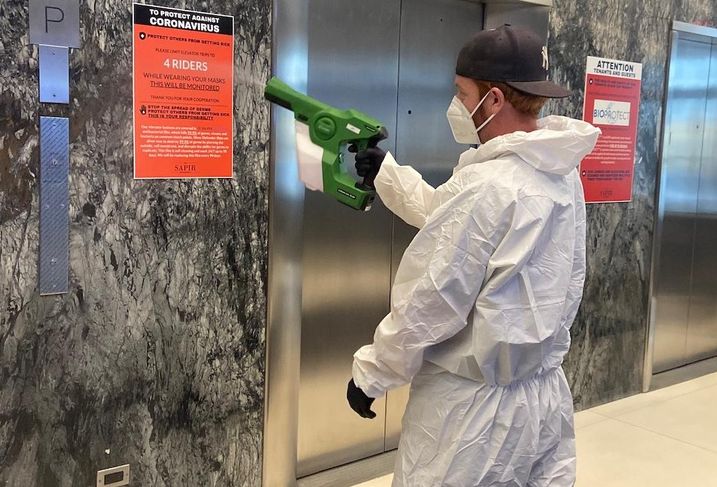 Courtesy of Sapir Organization
Cleaning underway at Sapir's 261 Madison Ave., which is one of the New York City offices that has opened

Offices in New York City have been open to workers for nearly a month now, but landlords are still making changes to their spaces to adjust for employee sensibilities.

“There were some folks in the beginning that were apprehensive. People haven’t been in the office for months, it’s sort of like that first day back at school," Marx Realty CEO Craig Deitelzweig said on a Bisnow webinar this week. "Each day they come in they feel more and more comfortable."

Marx owns 4.3M SF of commercial office, retail and residential space around the country, including the 35-story, 432K SF 10 Grand Central in Midtown.

“We are constantly communicating; someone might say ‘I would really prefer the doors of the bathrooms be open so we have one less touchpoint,’ so we’ve done that," he said. "There’s a lot of easy communication that can happen.”

Marx’s headquarters is running temperature checks, providing hand sanitizer and doing a mix of remote and office work to keep the capacity in the space at a reduced level.

The firm has also installed UV lights and is making more use of the outdoor space. Many workers are thrilled to be back, he said.

“We’ve had people who are in three days that want to come in five days, we’re trying to accommodate them in different spaces … Flexibility is key,” he said. “You realize how much you miss being together and collaborating in person.”

New York City is in Phase 4 of its phased reopening, and offices have been allowed to have 50% of the workplace back in the office since late June. Still, as Bisnow has previously reported, few people have returned to their desks this summer — even though many office landlords have worked to roll out significant changes in their buildings. Surges in coronavirus cases in other states have put people off returning, and many offices opted to remain closed until after Labor Day at the earliest. 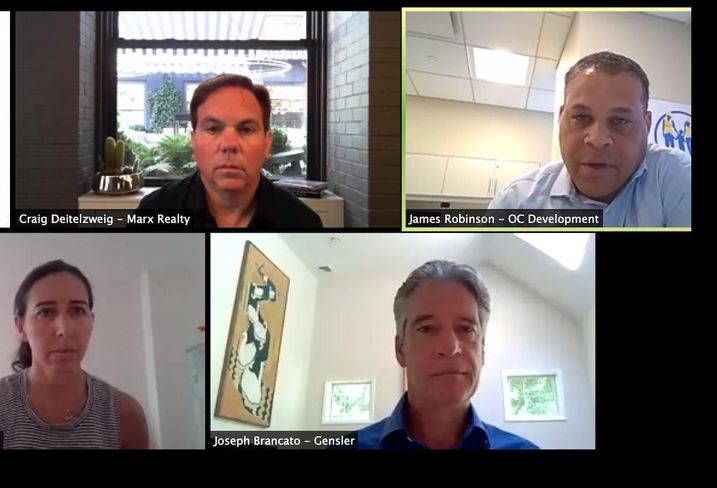 Panelists agreed that physical workplaces are a key part of collaboration, but acknowledged it will continue to be a work-in-progress adjusting to the new reality. Gensler principal Joseph Brancato said his firm has been working to help clients de-densify offices and establish ways to properly engage in social distancing.

Gensler ran a survey of 2,500 people around the country and found only 12% of respondents said they wanted to work remotely full time, Brancato said. On the contrary, 44% of people wanted to be in the office five days a week.

“We can get on Zoom and go to meetings all we want, but nothing replaces the spontaneity of just turning around and asking somebody something,” he said. “It’s going to take some time, but connectivity to people, that is why there is an office. And at the end of the day, building trust, mentoring and the onboarding of people, that doesn’t happen through Zoom.”

He pointed out the “hub-and-club” approach may be used more frequently, where offices establish smaller locations in the suburbs for their workers, in the style of the Apple Genius Bar or airport lounge-type locations for things like technical support or conferences.

“Work from home will be part of every workplace strategy moving forward,” he added.

Razia Ferdousi-Meyer, who is the global leader of real estate and business administration at Ankura, said the company had implemented a hub-and-club-style approach in the firm’s London location.

“Being global, we have multiple offices, we are taking the feedback [from employees] and opening just one floor in the London office instead of two to allow for a ‘touchdown’ space, almost like hub-and-spoke area or the concierge service where we have the tech department on-site,” she said.

Numbers out this week paint a sobering picture for the future of the New York City office market. Roughly one in four office employers are planning to shrink their office space by a minimum of 20%, according to a Partnership for New York City report. About 16% plan to move jobs out of the city.

Still, Deitelzweig pushed back on the idea that a heavy reliance on suburban, satellite offices is here to stay.

“Post-COVID, people will get back to the office, it’s important for everyone to be in one office together, that’s why the Googles of the world have been so successful, and the Yahoos not so much," he said. "Having worked in the suburbs, it’s really soul-sucking. You really want that environment where everyone is there and you are walking the streets of New York and that kind of stuff, and you can’t get that in a hub-and-club-type environment."

All the participants agreed the shifting environment of the pandemic and its impact on employees will continue to shape how offices look and landlords approach it. The reopening of schools — or lack thereof — remains an enormous challenge to workplaces. Public school systems across the country are preparing to start the school year with varying degrees of online and in-person learning. In New York City, which is home to the country’s largest school district, children will be in classrooms for one to three days a week.

“We were so rigid in everything we did in this industry,” he said. “It’s kind of forced us to be able to react and solve problems as they come up and not really be so structured, but embrace the fact that there may be different solutions. Just in the short term right now, it’s important to be very malleable.”