As 2016 Comes To An End, NYC Has Largest Price Declines Of Top 10 Markets 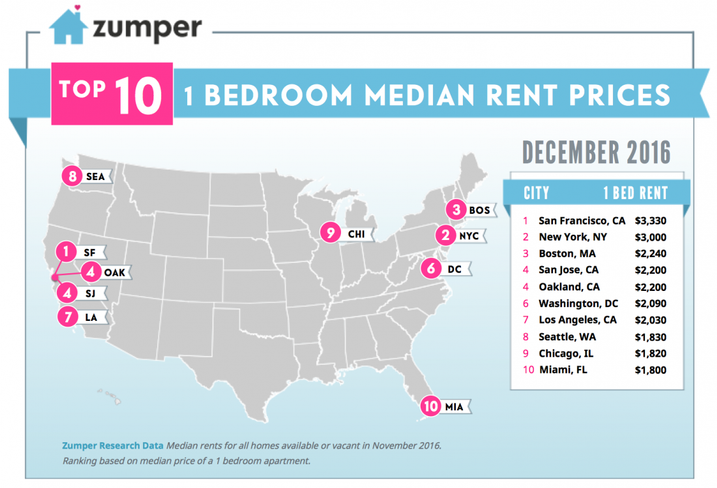 NYC had the sharpest year-over-year drop in rent prices in the entire US, a recent Zumper National Rent Report found.

Over the course of 2016, one-bedroom prices have fallen by 7.4% and two-bedroom prices are down 8% year-over-year. Even in the last month, two-bedroom rents declined 1.4% to $3,400. Rents for one-bedrooms remained flat at $3k. And, despite the decline, NYC remains the second most expensive rental market in the country.

NYC isn’t the only market that’s dropping. Among the most expensive rental markets, only Seattle saw rent prices for one-bedrooms rise in November, and that was by a measly 0.5%. Others gateway cities—San Francisco, DC and Chicago—all saw median rent drops over 3%.

The reason for these drops, the report asserts, is simple supply/demand dynamics, with a supply flood giving renters greater choice and leverage.

GFI Realty Services investment sales director Erik Yankelovich told Bisnow he isn’t sure that’s true for every market, but it seems like the culprit in NYC, where he’s seen a decline.

“If I had to speculate,” he said, “I'd say supply has clearly had an impact, and I think renters have perhaps moved into the more fringy areas where they can find better value for the same dollar.”

TOWN Residential leasing managing director Dan Marrello says supply/demand is one of several factors. While rents have been steadily climbing over the last six years, for example, wages haven’t, leading to an affordability pushback.

While Dan's confident the upcoming supply will be absorbed, landlords will need to offer incentives like free rent to entice tenants. This has already been seen in Brooklyn, where hundreds of rental units are forcing some landlords to offer as much as four rent-free months.