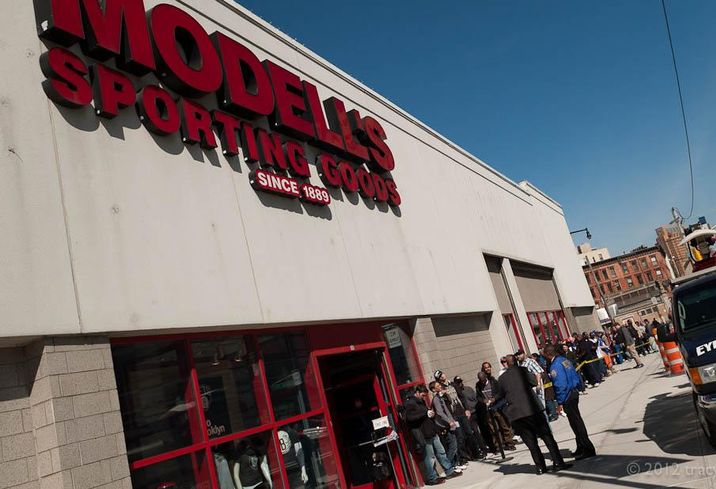 Flickr/Tracy Collins
A Modell's Sporting Goods store during a ticket giveaway for the Brooklyn Nets in 2012.

Modell's Sporting Goods has managed so far to survive the retail "kiss of death" that befell Toys R Us and other now-defunct chains.

Modell's, which has around 150 locations focused mainly between the New York and Philadelphia metropolitan areas, has clawed back several key vendors who were spooked when the store brought on Berkeley Research Group as a restructuring consultant, the Wall Street Journal reports.

The chain, which has remained in the same family since its founding in 1889, stands in stark contrast to brands like Sears and Toys R Us, which took on massive debt loads after private equity firms purchased them in leveraged buyouts and fell into bankruptcy.

Toys R Us filed for Chapter 11 mere weeks after hiring its own restructuring firm, a story that reportedly caused Modell's sponsors to cut their deliveries by more than half in the days after the latter did the same.

“No one survives this kind of thing," CEO Mitchell Modell told WSJ. "It’s like the kiss of death."

Modell claims that he and his merchandise manager personally called each and every vendor that services his stores to detail his company's financial status and vouch for its future prospects. In the ensuing weeks, Modell's terminated its relationship with BRG and recently brought on A&G Realty to help renegotiate the leases at some of its stores, RetailDive reports.

Some closures are likely, but Modell told the WSJ the company has stabilized.

“My suppliers hear the same thing about so many other retailers and they all got burned,” Modell told the WSJ. “Why not me? The difference is my name is on the door.”