Blaze Pizza, a startup pizza chain that builds customized pizzas for customers similar to the way Chipotle approaches burritos, is ramping up its efforts to challenge the delivery-oriented pizza giants, particularly Domino's. 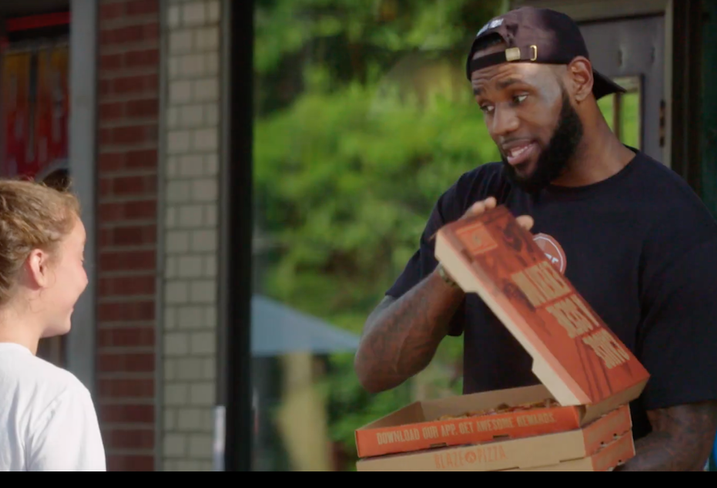 YouTube/Blaze Pizza
LeBron James delivers pizza in Akron, Ohio, in a commercial for Blaze Pizza, the chain he co-owns.

The move by Blaze Pizza — possibly including an initial public offering in the not-too-distant future, and definitely including larger pizzas for customers and a renewed marketing push by NBA star LeBron James — is the latest salvo in the battle for market share in the fast-casual pizza business.

James appeared as "Ron," a Blaze Pizza employee, in a video released Monday in which he hits the streets of his hometown of Akron, Ohio, lauding the company's larger pizzas.

Blaze Pizza co-founder Rick Wetzel told Yahoo Finance that the company, which has been backed by James since it was founded in 2011, is on track for an IPO. Besides being ready to take on Domino's, Wetzel said, the company is ready to take on the public markets.

He didn't specify a timetable for any IPO. The prospect of one for Blaze Pizza has been bandied about for some time. Earlier this year, Wetzel told Bloomberg that the company might be ready for an IPO in two years.

IPOs in the fast-casual arena haven't always gone well. In 2013, for instance, Potbelly Corp. generated much excitement among investors, with its shares nearly doubling in the company's first trading session. That didn't last. The stock is now trading at about $4.50/share, compared with a high of over $30/share after the IPO.

Whatever the timing of an IPO, Blaze Pizza faces an uphill battle against the pizza giants. The company has about 340 locations in six countries, and projects sales of over $400M in 2019. That compares with the leader in the pizza business, Domino's, which has more than 15,000 locations worldwide, with sales close to $6.6B last year.

Blaze Pizza plans to open 50 restaurants this year, bringing its total to nearly 400, including its first location soon in the U.K.

The startup pizza company is also putting more emphasis on its delivery via mobile ordering, because in the struggle for pizza market share, much hinges on the various pizza makers' approaches to delivering pizza. Online ordering is easier than ever, and customers expect more from food delivery services than ever before. Customers are turning to Grubhub and its competitors like DoorDash, Uber Eats and Postmates to order food, obviating the need to go to physical restaurants.

As a result, some major brands are scaling back on their physical restaurants — Pizza Hut said last month it is closing about 500 locations.