For pizza makers, order delivery used to be simple. Customers would call the pizza joint, then wait for a delivery person to show up. Now online ordering, which is revolutionizing the fast-casual and fast-food restaurant business as a whole, is impacting the giant pizza chains, as well as smaller operators, with unclear results for the restaurants. 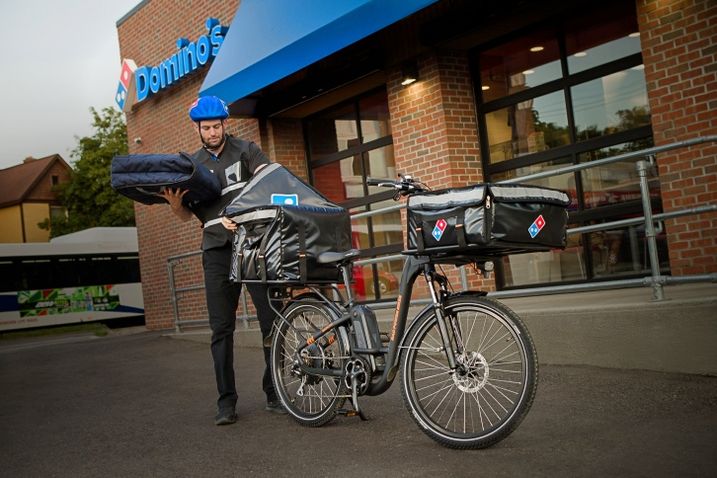 Courtesy of Domino's
Domino's is starting to deliver pizzas by electronic-powered bikes in some places.

In particular, the No. 1 and No. 2 U.S. pizza brands, Pizza Hut and Domino's Pizza, are taking opposite approaches to online orders.

Pizza Hut not only uses third-party delivery service Grubhub, its parent company, Yum Brands, made a $200M investment in Grubhub in 2018. Early this year, the company began transitioning away from its own online ordering system, relying on Grubhub to process orders.

Thus Pizza Hut became the first among its industry competitors to give the keys of its off-premise business to an external third party, Yahoo Finance reports.

By contrast, Domino's is resisting third-party delivery services. Its employees make deliveries from its 6,000 U.S. stores and most of its 11,000 global locations, and the company also runs its own online-ordering app. Putting delivery into the hands of third parties would eat into profits and expose the brand to reputational risk, Domino's CEO Ritch Allison told The Wall Street Journal.

In theory, pizza restaurants should benefit by making use of delivery services, since they tend to expand sales. Customers are also coming to expect food at the touch of an app, increasingly turning to Grubhub and others, such as DoorDash, Uber Eats and Postmates, to order food from restaurants without going near one.

Trouble is, for now most delivery orders aren't profitable, in part because of the fees that delivery services charge, not all of which can be passed along to the end user.

Yet whatever the potential downside to third-party delivery, Domino's aversion to it might be costing the company sales. The more people go to Grubhub or Doordash or the like, the fewer will see Domino's as an option. The company has reported lower same-store sales growth in recent quarters.

"Our same-store sales performance for the quarter came in toward the lower end of our three-year to five-year outlook, as we continue to navigate through headwinds related to aggressive activity from third-party delivery aggregators," Allison said during the company's most recent earnings call. "I do not expect this activity to ease in the near term."

Another strategy Domino's has launched to stay competitive in delivery involves the use of electric bicycles, especially to deliver pizzas more efficiently in areas with traffic congestion and limited parking.

According to the company, Domino's stores nationwide will soon have the option to use e-bikes for pizza delivery through a partnership with Rad Power Bikes, a major e-bike brand.