Though the U.S. apartment industry is still in good shape, the prospect of new rent control measures, some of them at the state level, threaten to put a crimp in future revenue in the longer run. 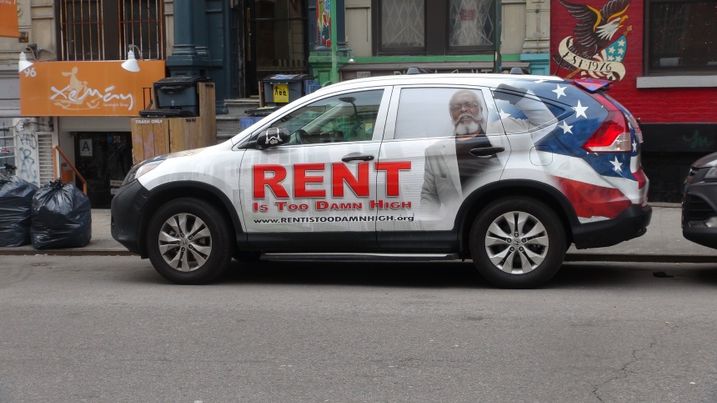 Wikimeida/Alex Lozupone
Car of the Rent is Too Damn High Party, which was active in NYC in the 2000s. The problem of unaffordable housing hasn't gone away since then, spurring renewed efforts for rent control.

The effort to enact rent control has gained traction in recent years as apartments in many cities have become increasingly unaffordable, the Wall Street Journal reports, citing Oregon's recently enacted law capping rent increases to 7% plus the local inflation rate, efforts in Colorado to repeal the state's ban on rent control, and a move among New York legislators to cap rent increases. Illinois also just raised (and shut down) a movement to eliminate a ban on rent control.

If rent control gains ground, that would represent a reversal of a decades-long trend of it being out of favor in most places. Rent control is banned by law in most states, partly through the efforts of the American Legislative Exchange Council. Only California, Maryland, New York and New Jersey allow local rent control, and Oregon is the only place that has it statewide, according to the National Multi Housing Council. Still, efforts are ongoing to revive rent control.

Just on Monday, the Los Angeles-based AIDS Healthcare Foundation said it had filed papers with the California Attorney General’s office to put a new rent control measure on the ballot in 2020.

Prop 10, a California ballot measure that would have repealed the state's existing law limiting rent control by local governments, lost in 2018 by a wide margin, getting barely over 40% support, but advocates of rent control in the state are eager to try again.

Under the new proposal, rent control could be enacted for residential properties 15 years or older, and rent increases on newly vacant apartment units would be limited to 15%. The measure would exempt the owners of one or two residential dwellings.