Prop 10 Appears Likely To Fail, But Demand For Rent Control Will Continue To Shape Multifamily

Those in the multifamily sector anticipate the failure of Proposition 10 — the ballot measure that would make it possible for cities to once again set their own rent-control limits — but they worry that the issue will just raise its head again in some other form.

That is why, though developers, property owners, investors and others have actively fought against the measure, many of them also want to have discussions about what the future of rent control means in the state. If such decisions are going to sit in the hands of the state legislature or return to voters in the coming year, multifamily CRE leaders want a seat at the table.

"It's not going to go away," AGI Avant Managing Executive Principal Eric Tao said at Bisnow's Multifamily Annual Conference in San Francisco last week. "We all just want certainty. If we have certainty, we can plan for it."

Tao said he hoped this would be a wake-up call in Sacramento that would lead to some real legislation.

Proposition 10 would repeal the Costa-Hawkins Rental Housing Act, which was put in place in 1995. Under Costa-Hawkins, cities are kept from putting rent control measures on single-family homes, condominiums and apartments built after 1995. Landlords can move rent-controlled apartments to market-rate rents when a previous tenant moves out and a new tenant moves in.

Ever since the measure hit the ballot, those in the industry have funded and supported a campaign to educate voters about the flaws in Prop 10, which they argue would create a disincentive for new investment in and development of market-rate housing in the state — making the state's housing shortage worse and less affordable.

That campaign appears to have paid off, based on some poll numbers that J.J. Abraham, divisional president for California for Lennar Multifamily Communities, shared at the event. He worked on the committee to combat the proposition.

The poll found that 60% of voters were against Prop 10, 25% were in favor and the rest were undecided (statistics that drew applause from the crowd). Of those voters polled, 80% recognize Prop 10.

Those who have already voted by mail, 36% of voters, have skewed strongly against Prop 10, with 57% against and 28% in favor. But, Abraham noted, 56% of voters said they were still in favor of rent control.

"We still have an issue," he said. "The committee has done a good job. We had to come a long way ... in educating people on how this is bad for the average renter, but that doesn't mean they don't want affordable housing."

There was a concern that once Prop 10 hit the ballot, capital would dry up as investors pulled back, but that hasn't happened, said Bruce Dorfman, senior managing director for Trammell Crow Residential's Northern California division. While that is a positive, that fear will continue to resurface if the state doesn't address the rent control issue.

"Costa-Hawkins is going to be modified," Dorfman said. If those in the industry don't take the lead on shaping that discussion, it is going to be tweaked in a way they don't want, he said.

Some of the speakers said they were seeing varying responses to the uncertainty of what would happen with rent control in the state and what that would mean for multifamily properties.

Some of the big institutions will not invest in development of new apartments for acquisition right now because of the uncertainty, said Noah Hochman, senior managing director of capital markets for TruAmerica. Some builders are finishing current projects and not planning new ones in California — even if Prop 10 doesn't pass, he said.

Hochman said TruAmerica's investments this year were in locations that don't have rent control; the company is actively avoiding cities like Berkeley, which has rent control measures, and Richmond, where the city put rent control in place after the company had purchased a property there.

Vanguard Properties Director of Investment Sales Alex Kolovyansky said he is seeing both sides — those who don't think Prop 10 will pass and those who are planning for it. How they act depends on the firm.

For large operators, it will be a bump, but not change much for them. For smaller investors, for whom it could have a greater effect, the pessimists are putting properties on the market. Others have seized it as an opportunity to buy.

"Prop 10 keeps coming up in every conversation when talking with investors," Belman Investment Group founder and principal Jose Belman said. "There's more opportunity for us. Not so many people are buying. We're buying. We're looking at it for the long run."

Still A Need For Affordable Housing

Bridge was founded on the principle of increasing supply to meet demand, and allowing more rent control won't help fix supply, but would likely curb it. That could have a negative effect on Low Income Housing Tax Credits, which she said is the best vehicle for building affordable housing. Less market-rate housing going up means collecting fewer inclusionary housing fees.

Still, rents have risen in some markets at an unsustainable level that far exceeds what renters can absorb, she said. While repealing Costa-Hawkins is not the solution, there need to be discussions about an anti-gouging cap, she said.

Rent control, as it is handled in many places, is flawed, and there are some good arguments against it, Tenderloin Neighborhood Development Corp. CEO Donald Falk said. Allowing the status quo, however, is not really an option.

"Nobody can look at the housing landscape today and say it's acceptable," he said. "There is a better rent control law out there maybe someday for California."

Abraham compared the multifamily housing supply to a stack of pancakes: New pancakes go on the top of the older ones, which have sat longer and are a bit older, until there is an assortment of Class-A, B and C from the top of the stack to the bottom.

Prop 10 would make it so new pancakes aren't going onto the stack, meaning no new inventory even as those already in the stack are growing older and staler. It is not the affordable housing solution it intends to be.

"No matter what happens, we've got to come together — there is a solution to this," Abraham said. "There isn't anybody who doesn't want to solve it."

See a slideshow from the BMAC NorCal event below: 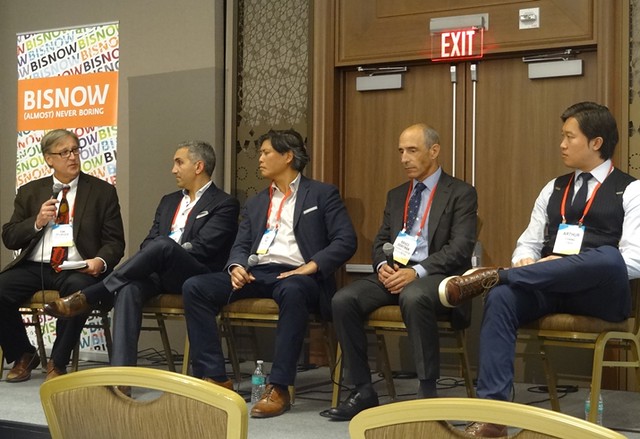