Can The Oakland A's Replicate The S.F. Giants' Ballpark-Centric Success?

If the city long in San Francisco's shadow ever breaks out of it, Oakland's baseball franchise will likely have had a lot to do with it.

The Bay Area's two professional baseball teams are making similar attempts to write the latest chapter in huge sports-backed developments, which are rising in popularity.

A visit to the site for the Giants' development in San Francisco and the land for the Athletics' in Oakland — apart from the scant 8 miles separating the two cities — would reveal the clearest difference between the two attempts. 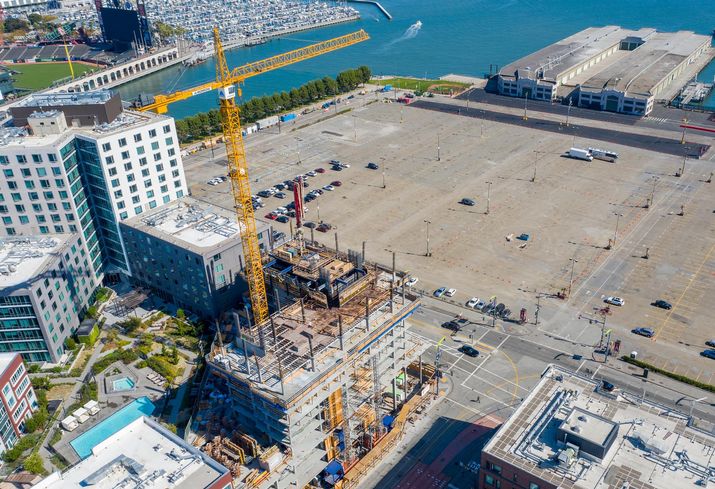 Courtesy of Droneshot
Mission Rock last fall, when the clearest sign of construction was at the adjacent One Mission Bay condo development by Strada Investment Group and CIM Group.

Within a few months, the Giants and co-developer Tishman Speyer will have broken ground at the 28-acre Mission Rock; site preparation is already visibly underway, according to San Francisco Giants Senior Vice President of Strategy and Development Fran Weld.

"We're in a really exciting time," Weld said. "We're looking forward to breaking ground on the first phase of parks and buildings in just a few months now."

That timeline puts the Giants, which expect to build about 1,200 residential units, up to 1.6M SF of commercial space, and 8 acres of parks and open space, much closer to a payoff than the A's, as does the fact San Francisco got the hardest part out of the way in 2000 (and technically started over 10 years ago).

In Oracle Park, the Giants already attract about 3 million fans every year, a figure it expects will grow and help increase revenues derived from the up to 2.8M SF of development that will occur at Mission Rock. At Jack London Square in Oakland, the new ballpark could create 10-year economic impacts worth $7.3B in jobs and spending, the Bay Area Council Economic Institute estimates.

Like the Giants did before devising the China Basin ballpark, the A's had several ballpark plans come up short before gaining momentum at Howard Terminal. That includes plans in neighboring Fremont and San Jose that fell though.

A privately financed ballpark complicates matters for the A's and their Howard Terminal plans, which include up to 3,000 homes, 1.77M SF of commercial development and a 400-room hotel, Cushman & Wakefield Senior Director Robert Sammons points out. The A's still have to clear several of the barriers that the Giants already have, like an environmental review and a local city council vote, while securing enough help from the city for infrastructure to accommodate fans who come to the proposed 35,000-seat stadium on game days.

In contrast, the Giants' flagship, Mission Rock, which will benefit from the Muni Metro Extension that accompanied the Giants ballpark opening two decades ago, has more transit infrastructure in place. While Howard Terminal has a ferry terminal in the area, the nearest BART station is a mile away, and many parking spots are regularly used by Port of Oakland tenants and other existing businesses. In the traffic-choked Bay Area, that could be a major problem if A's games bring more than 10,000 cars into Oakland, as a city study suggests.

The private financing of the Howard Terminal ballpark also presents its challenges. Nationwide, cities have become more reluctant to take on much, if any, of the bill in stadium development due to debt concerns. San Francisco and the Giants, which lost four referendums for taxpayer funds before almost fleeing to Florida, and Oakland and the A's are no exceptions, S&P Global Ratings Director Chris Morgan said.

“It seems like both cities value their teams," Morgan said. "But our sense is that the political establishments are skeptical of putting a lot of public resources into supporting the actual construction of stadiums, though from what we’ve been hearing, they’re happy to do things around the edges, like infrastructure.”

Courtesy Of BIG - BJARKE INGELS GROUP
A rendering of the A's ballpark plans, with other commercial buildings in the background.

That leaves the hundreds of millions of dollars for a Howard Terminal ballpark and other development expenses up to the A's, which haven't outlined development costs. For comparison, the Giants' ballpark cost $357M to build in 2000, which, when adjusted for inflation (but not for the region's exorbitant construction costs), comes out to about $530M now.

The A's also have port industry opposition to consider. A bloc including port tenants and unions strongly opposes the team's plans, arguing they will disrupt business. The A's and the city will need to come up with a transportation plan that is acceptable to the opposition if the ballpark is ever to be built.

Despite industrial as well as environmental uncertainties, the A's ballpark could attract interested capital just like the Giants' did, and the office and residential components in high demand on both sides of the Bay Area will draw investment as well, according to Cushman & Wakefield Director Enoch Lawrence, who leads capital markets in the company's Sports & Entertainment Advisory Group.

“The content has a kind of monopolistic draw. It’s separate from the typical swings of the economic cycle, and that attracts a different bucket of capital," Lawrence said. “The combined model is much more acceptable in the capital markets and from a financing perspective."

A number of recent projects support Lawrence's view, from the Chicago Cubs ownership's mixed-use district around Wrigley Field to the Braves ownership's development of Atlanta's SunTrust Park, which drew approximately $400M commitments from both the Braves and Cobb County, Georgia, in a public-private partnership.

Lawrence said that what differentiates the A's and Giants projects from other sports franchise-backed developments is the inclusion of thousands of residential units.

"What we need is what they're building, and that's housing and office," Sammons, who heads Northern California research for Cushman & Wakefield, said of the Bay Area teams' plans.

Cushman & Wakefield is tracking about 6M SF of tenants in the market for office space in San Francisco, and that is after Visa signed up in November for about a fifth of Mission Rock's future office space for its new global headquarters.

Oakland, meanwhile, has made for an increasingly attractive place to live and work in the last five years, Sammons said. The growing city is in an unprecedented apartment-building boom and appealing to billion-dollar behemoths like digital payments company Square. 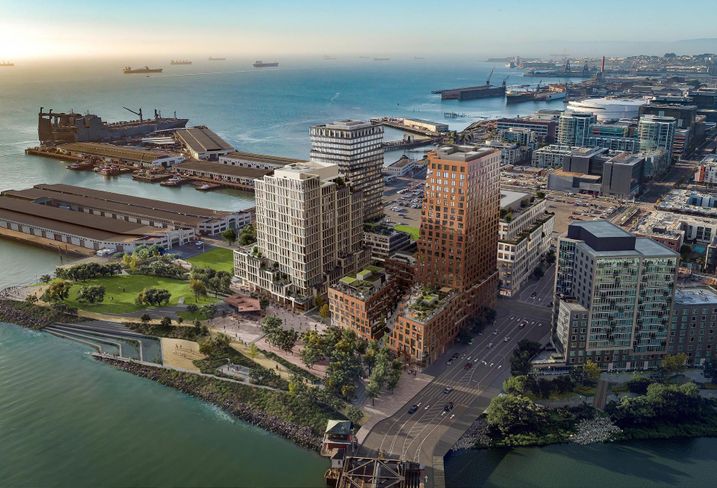 Courtesy of Tishman Speyer
A rendering of the Giants plans for about 1,200 units, up to 1.6M SF of commercial space and 8 acres of parks and open space.

Both projects are on land owned by their cities' respective ports and subject to agreements with them. They are also subject to the environmental requirements of building next to land vulnerable to a rising sea level, and on mostly undeveloped or formerly industrial land.

While Cubs' ownership set out to build an entertainment district highlighted by hotel and retail options, and Los Angeles Rams' ownership the $5B LA Stadium & Entertainment District, the Giants' plan is different, Weld said.

“This is not going to be a sort of ballpark/entertainment district type of development," she said. "This is a neighborhood development from the ground up. It’s very different from some other ballpark developments you may see, where it’s on land owned by the team or really revolved around planning for the game.”

The A's plan currently includes a 3,500-person performance venue, but the proposal is highlighted by upward of 3,000 new homes, a substantial number of which will need to be affordable to win city approval.

Both Bay Area projects also feature a star-studded lineup of architects not typically associated with sports-anchored development. For the Giants, global architecture and design firm Perkins and Will drew up early designs for Mission Rock; since then, Netherlands-based MVRDV, Studio Gang and SCAPE Landscape Architecture are among those that have come on board. The A's made waves early when they brought on Danish architect Bjarke Ingels Group and Gensler.

To Lawrence, projects as a whole need to first and foremost make sense for the areas in which they exist.

“It’s completely local," he said. “You’re going to look at it through the lens of highest and best use, what fits into the community, and what demand drivers say is required at that site.”

Still, the Giants think their overall strategy will serve as the blueprint.

“We really feel Mission Rock can be a model to others," Weld said. "We’re approaching this differently, where it’s about the neighborhood and building a neighborhood rather than thinking about this as a sports-oriented destination.”