This Week in Real Estate Numbers 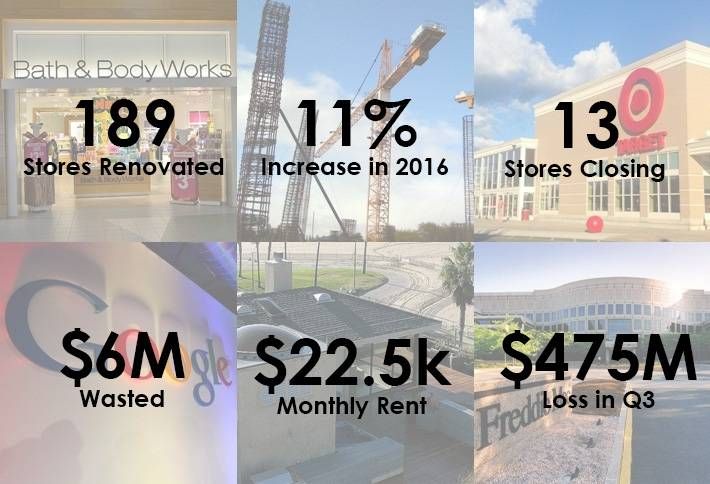 13 --> The number of stores Target is planning on closing following a series of layoffs and a failed expansion into Canada.

189 --> The number of Bath and Body Works stores L Brands is planning on opening or remodeling after seeing the 25% sales boost from remodeled Victoria’s Secret stores.

5.23% --> The current rate of the Trepp CMBS Delinquency Rate, which fell five points for a second straight month.

$7B --> Whole Foods’ market value loss since January 2015, making it one of the year’s worst performers.

$1.5B --> The price tag for Macklowe Properties’ conversion of One Wall Street. The company just filed for a permit this week for the 944k SF space.

41 -->The floor count for the Durst Organization’s decade-long mixed-use development at 855 Sixth Ave.

800k --> The number of international students currently enrolled in US universities, boosting demand for student housing.

$6M --> The amount of money Google wasted on renovating 131 Green St in New York’s SoHo neighborhood before deciding to abandon plans for a retail store.

11% --> The predicted increase in construction for offices, shopping centers, warehouses and hotels in 2016.

$168M --> The amount of Airbnb’s $415M in revenue that came from hosts who had at least three live listings.

$20.17B --> The amount private equity firms have spent on multifamily properties in the last two weeks, according to CoStar.

2.08B --> The amount of yuan Chinese developer Shi Erqun took from a bank during a 1999 bank robbery that he claims to have masterminded.

630 feet --> The height of the New York Wheel in St. George at the southern tip of Staten Island, which was just approved by the city.

$22.5k --> Snapchat’s monthly rent for a beachfront penthouse at Brooks Avenue and Beachfront Walk in Venice.