I Spy A Deal: The Inside Story of the GCHQ Manchester Relocation

Psst. Want to know a secret?

This week we learned a little more about the long, and very hush-hush process of luring government secret communications and eavesdropping agency GCHQ to Manchester.

It turns out that the process took three years of behind-the-scenes negotiation, not the one year mentioned by most sources, and that other Manchester tech occupiers were crucial to smoothing the path for GCHQ.

he Government Communications HQ planned to open its new Manchester hub at the 100K SF Heron House, Albert Square, those reports have been confirmed. It will take a 15 year lease on an unspecified floorspace, but one the agency says will house between 500 and 1,000 staff. Lettings schedules suggest about 60K SF has been taken.

The story, revealed by panellists at Bisnow’s Manchester Office Sustainability & Tech event, showed how the city’s tech cluster is now working together to promote the city. A virtuous circle of growth and new arrivals is beginning to pay off, and the GCHQ deal is proof, panellists said.

In October 2019 the Government Communications HQ planned to open its new Manchester hub at the 100K SF Heron House, Albert Square. It will take a 15-year lease on an unspecified floorspace, but one the agency said will house between 500 and 1,000 staff. Lettings schedules suggest about 60K SF has been taken.

“We spent the best part of three years in discussions with GCHQ to secure the  move," Leese told the 120-strong audience. "It was really interesting to have discussions with people whose names you are not allowed to know, but that is what goes with this territory.”

“Given the strength we have in Manchester University, and the cluster in cybersecurity, we knew that if we succeeded in bringing them to Manchester then their arrival could underpin growth in the city’s tech sector.”

By providing a home for the spy agency in city council-owned Heron House, the council could provide extra assurance for the spooks. Negotiations with the council solved both the macro and micro problems simultaneously, and gave them the assurance of a sympathetic (and trusted) landlord.

“We worked very closely with GCHQ to help them into a building owned by the city council, and our thinking was that way we can get the first foot in the door for a major occupier, and that the rest of the market can follow from that.” 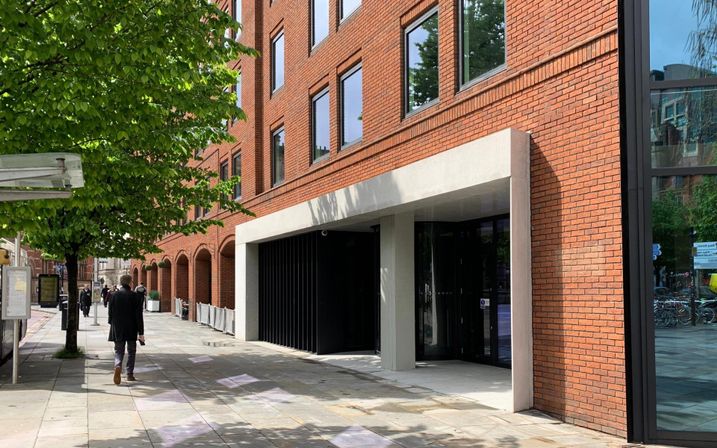 However fellow panellist Mandy Ward, Manchester lead for Hewlett Packard, added extra insight, showing how existing Manchester businesses played a role in securing the GCHQ letting. It turns out that in the discrete world of espionage, having a friend you can trust is worth a lot in the office lettings market.

“GCHQ is one of our major customers, so we were able to reach out to them, and support them, and leverage our experience of moving into city centre Manchester,” Ward said.

“Like them we have had employees moving in from other parts of the city, and from outside Manchester, and we could share that experience with our customer. I think you can see, from our experience with GCHQ, how the interconnections between various businesses in the Manchester tech sector work, and how they can become quite important.”

Ward said her own firm’s arrival in Manchester had lessons for GCHQ and others. GCHQ surprised some observers by choosing a conspicuous city centre location, but Ward said that part of a city centre address was visibility.

“One of the factors for our moving into central Manchester was visibility in the jobs market. We had been in Warrington for 20 years in a very 1990s corporate-strategy type office, and it was not fit for purpose any more,” she said.

“In part we wanted to be co-located with our major customers, that was very important to us, but so was the available pool of talent in Manchester which was a key driving force in our decisions. Being close to the university was important to us.”

“Any occupier looking to draw on that, but who also wants to keep operational costs down, will be looking to Manchester which is now serving as a hub for the tech sector,” she said.