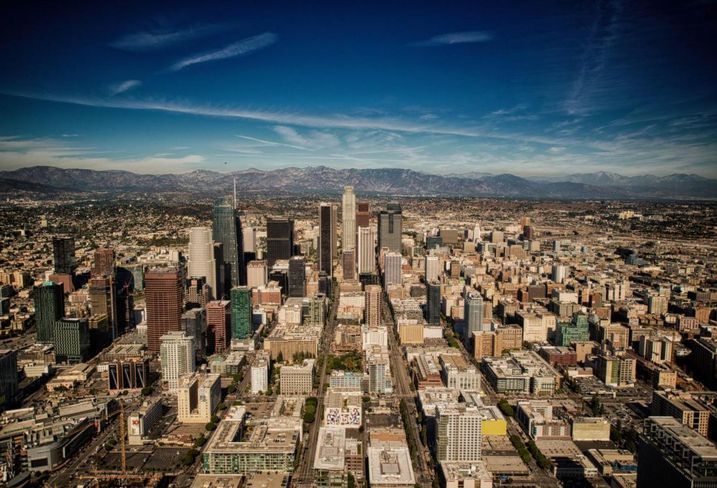 Los Angeles is growing across sectors and new projects promise to shape the city in the coming years.

Google just finished moving into the Spruce Goose and will soon take over an entire former shopping mall. Apple is continuing to lease up office space.

Los Angeles added 16,500 housing units last year — the most in California. Foreign investments are pouring into the greater Los Angeles industrial market. And major mixed-use developments are on the way.

"It’s very exciting — especially with the large deals happening in Culver City, Hollywood, West LA, Burbank and Downtown," CBRE First Vice President Chris Penrose said in an email. "It’s encouraging seeing these companies continue to hire and grow their businesses and doing so in Los Angeles. The tech, media and entertainment sectors continue to thrive and professional service firms are starting to grow across the LA basin.

"So far, everything remains very positive as unemployment continues to drop and businesses are hiring more and growing across Southern California," he said.

As Los Angeles gears up to host major sporting events such as the Super Bowl in 2022, the College Football National Championship Game in 2023 and the Olympics in 2028, all eyes will be on the City of Angels.

All of this activity will drive the discussion at Bisnow's Los Angeles State of the Market event May 29.

Several billion-dollar developments across Los Angeles have already broken ground and others are patiently waiting to get off the ground.

Here are some of these major developments that could reshape Los Angeles in the years and decades to come.

Privately financed and costing upward of $5B, the future home of the NFL Rams and Chargers and the soon-to-be crown jewel of Inglewood, the Los Angeles Stadium and Entertainment District at Hollywood Park is probably the most exciting and anticipated megadevelopment in Los Angeles.

HKS Architects is designing the stadium, which is slated to be completed by 2020.

Super Bowl LVI in February 2022, the College Football National Championship game in 2023 and the opening and closing ceremonies of the 2028 Olympic Games are already booked to use that site. 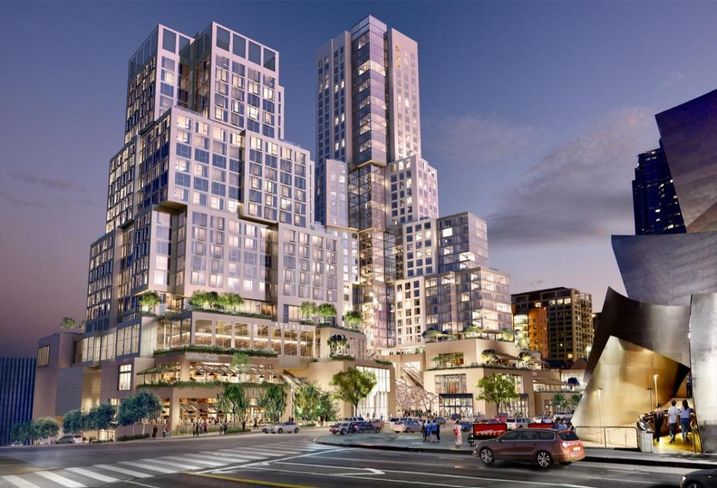 Courtesy of Related Cos.
The Grand Avenue project in Los Angeles

The Grand in downtown Los Angeles

Formerly The Grand Avenue Project and now just known as The Grand, this Frank Gehry-designed $1B mixed-use project is set to live up to its name.

Related Cos. Senior Vice President Rick Vogel previously told Bisnow that this is the project that will make downtown a cultural epicenter.

The 3-acre, mixed-use project sits across the street from the Disney Concert Hall and The Broad Museum.

The Grand will feature two skyscrapers, more than 200K SF of retail, a 430-seat luxury movie theater, a hotel and a residential tower. One tower will rise 39 stories and have 436 residential units, with 113 described as ultra-premium units and 20% reserved for affordable housing.

The other tower will be a 20-story, 314-room Equinox Hotel with meeting space, ballrooms, restaurants and other amenities.

The development is a public-private partnership between Related, CORE USA (a joint venture of China Harbour Engineering Co. and CCCG Overseas Real Estate) and the Los Angeles Grand Avenue Authority. 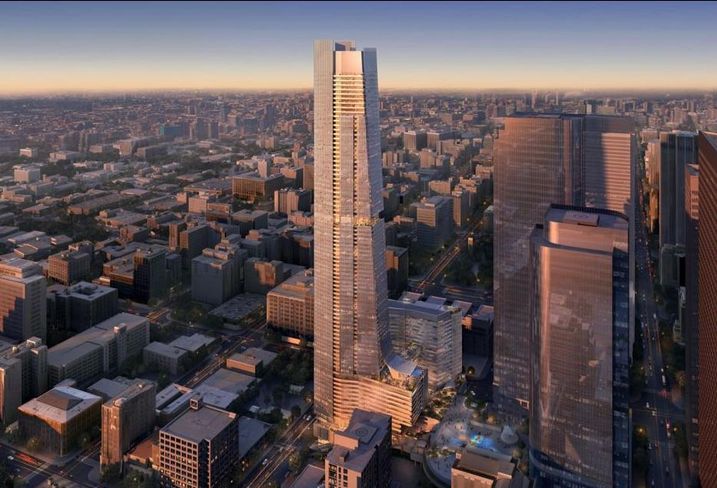 One of the newest proposed skyscrapers in downtown, the $1.2B Angels Landing development will be a city within a city.

Handel Architects is tasked with overseeing the design. OLIN is handling the landscaping.

The project is slated to open sometime in 2028. 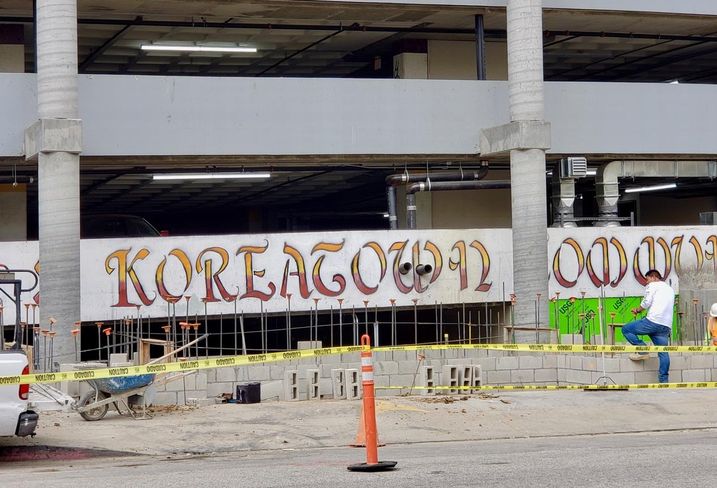 Bisnow/Joseph Pimentel
A construction worker stands next to a construction site soon to be an eight-story, 61-unit apartment building at 689 South Catalina St. in the Koreatown neighborhood of Los Angeles.

No one area in Los Angeles has seen more development than Koreatown.

Due to its proximity to downtown Los Angeles and several public transit options, Koreatown has seen a boom in various projects in the past several years.

Couple that with Los Angeles’ Transit Oriented Communities Affordable Housing Incentive Program, and more development is sure to come into the area.

More than 50 projects — retail, multifamily, office and mixed-use — are either under construction or in various planning stages in Koreatown.

Jamison Properties is considered one of the biggest developers in K-Town, having  completed several multifamily projects in recent years and with more proposed projects in the pipeline.

Find out more about major projects at Bisnow's Los Angeles State of the Market event May 29 at the Trust Building in downtown Los Angeles.