London and Birmingham will be massive markets for senior living, if planners can get their act together.

New research produced by Knight Frank and law firm Irwin Mitchell has revealed that councils across England are under-prepared to provide suitable housing for seniors, with London facing particular problems.

The research has identified 10 opportunity areas ripe for development of senior housing across England, looking at both private sector and affordable options. The data shows areas where demand is high but the barriers to progress have meant limited supply.

London is an increasingly ageing city and London boroughs exclusively make up the nation’s top 10 ageing local authorities, the research said. The capital’s over-65 age group is expected to increase by 32% between 2017 and 2029. Yet Knight Frank and Irwin Mitchell said London is underperforming when it comes to delivering housing for its senior citizens, with 22 boroughs rated low on their preparedness for senior housing.

The new draft London Plan recognises the importance of the sector. However, the two firms say the city’s record on delivery has been poor. In the first three full years of the plan (2017-2019 inclusive), just over 700 senior living homes were delivered each year, a total of 2,100 units. This compares with a target of 12,345 units. 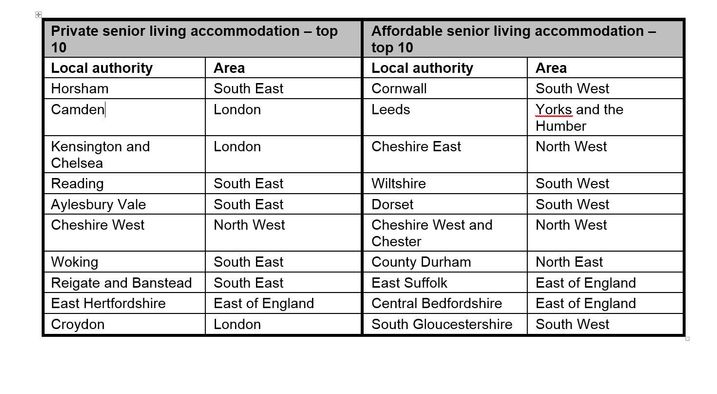 The analysis highlights opportunity areas in the South West corridor of London, where there is potential for significant growth. These boroughs perform relatively poorly in the planning score, but have other factors firmly in their favour, the consultancies say.

There are also some boroughs bucking the trend in London. Camden scored highest out of the London boroughs, and second overall in overall opportunity score for private delivery. Camden has a specific policy supporting senior housing.

Birmingham could also be a growth area, with an over 60s population due to grow by 22% to 183,000 by 2034. However, the firms note that city planning policy does not give priority to senior living, has no housing allocation and no policies to support delivery, and private sector schemes come with a requirement to deliver affordable housing. Since 2010, there has been an average annual delivery of 208 senior living units across the city, and none since 2018.

Of the big regional cities, only Leeds rates high for its planning preparedness.