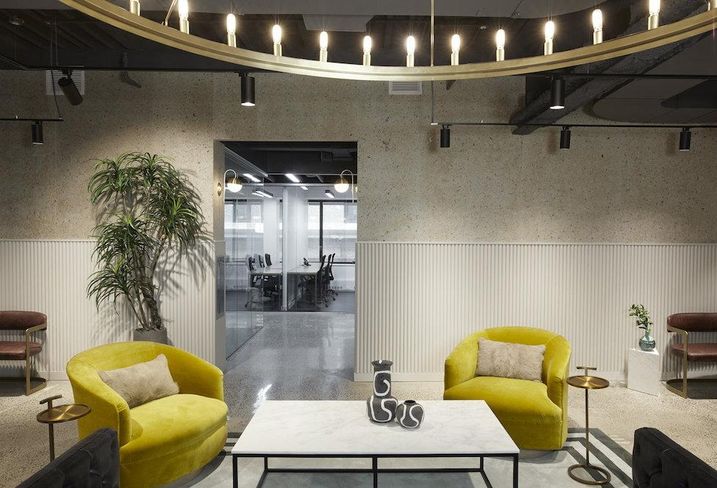 It has been a year of coworking expansion in Houston, and New York City-based Bond Collective is the latest company to join the list.

The coworking company has inked a 26K SF lease for two floors at Pennzoil Place, 711 Louisiana St. in Downtown Houston. The 1.4M SF, Class-A high-rise is home to tenants such as Bracewell, Cheniere and Opportune. It is also near Houston's Theatre District and offers direct access to the Downtown underground tunnel system.

“We could not be more pleased to welcome Bond Collective to Pennzoil Place,” said Transwestern Vice President Tyler Garrett, who, along with Eric Anderson, represented the building owner, Metropolis Investment Holdings Inc. “With a high focus on curated design, Bond Collective will be able to take advantage of over 20-foot ceiling heights on the first floor, creating a dramatic entry point to its space that will serve to activate the lobby with vibrant architectural design.”

Bond Collective aims to create boutique environments with a focus on hospitality and design. In addition to Houston, the concept is launching new locations in Brooklyn, Philadelphia, Nashville, Chicago, Austin and Washington, D.C. Cushman & Wakefield's Christine Colley and Nicholas Woodhull represented the tenant at Pennzoil Place.

Coworking is growing on Houston office operators that have been cautious of the platform during its infancy stages. It is uncharted waters, and the true benefit and impact of coworking have not been realized. But coworking helped Houston in the wake of Hurricane Harvey, and some hope that it can serve as a stabilizer and reduce sublease space in future downturns.

The new deal at Pennzoil Place notes an emerging trend to bring coworking options within the Inner Loop. In the past, operators have opted to open locations in suburban markets such as Worksuites in The Woodlands and Sugar Land, The Work Well in Cypress and WeWork in The Woodlands.

More recently, Life Time Inc., Spaces and Common Grounds have released details for new locations closer to the heart of the city. Faced with softer office fundamentals, coworking is expected to play a role in the landscape of Houston's office product moving forward.