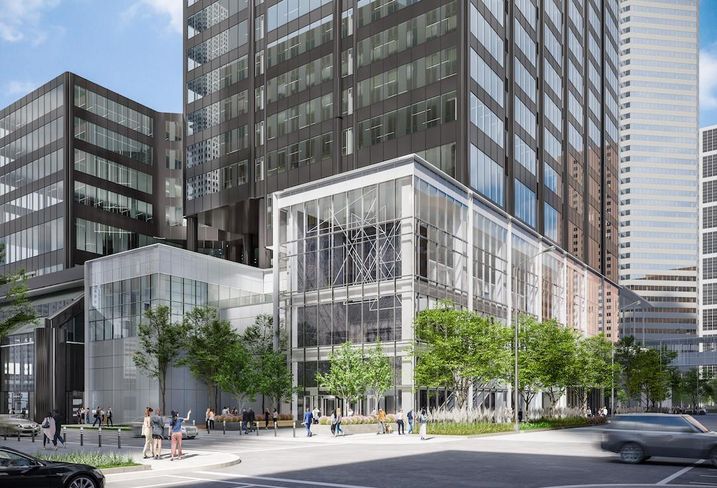 Courtesy of Brookfield Properties, Gensler
A rendering of the 2 Houston Center lobby in Downtown Houston

The international design firm will occupy two floors in 2 Houston Center, a property being renovated at 909 Fannin St. Gensler will relocate its 288 employees later this year.

“Downtown Houston is and has always been our home,” Gensler co-Managing Director Stephanie Burritt said in a release. “Our employees have enjoyed being surrounded and inspired by Houston’s unique urban fabric, and we want to continue that energy by bringing it into our new space.”

“As our work, our clients and our Houston team grow and changes, so should our office,” Gensler co-Managing Director Hunter Clayton said. “The design and functionality will reflect a new generation of workspaces — one that fully represents our culture, our evolution and our craft as designers.”

Brookfield Properties launched a massive modernization and renovation plan in January for Houston Center, a 9.2-acre portfolio of high-rise office buildings and a retail center. 2 Houston Center is one of the properties within this project, which is Downtown's largest campus. Brookfield acquired Houston Center in 2017 for $875M.

“We are pleased with Gensler’s decision to relocate their Downtown office to 2 Houston Center,” Brookfield Properties Executive Vice President Travis Overall said in a release. “As the project architect on the recently announced Houston Center renovation, having Gensler office at 2 Houston Center speaks highly of the capital investment we are making in the project and in downtown. Upon completion, Downtown’s largest asset will be a vibrant destination for tenants and visitors alike.”

Gensler is the design partner for Houston Center and will design its own space at 2 Houston Center. The new office space will have a dedicated makerspace and a street presence. Design details will be released at a later date, per the report.