The Australia-based company also shared plans to lease one of the ground-level retail spots to a non-Texas based company. Four or five tenants will occupy the 13K SF space.

"We are in the process of being very specific in who we target," Caydon Chief Operations Officer Derrek LeRouax said. "We don't, as most other developers would, take the first people that come through the door with the highest dollar. We look at it from a perspective of being able to help balance the community."

The $200M development will feature one- and two-bedroom units that range from 550 SF to 1,300 SF. The project broke ground in January, and the first five floors will be available by August. The rest will be delivered in November 2019.

The array of amenities offered at The Midtown is what will set it apart from the competition, LeRouax said. For those missing the backyard feel, the developer is constructing its own backyard with a combination of relaxed spaces for residents and their pets.

The top level of the 27-story building will feature a sky bar, exclusively for residents. The 4K SF indoor and outdoor space will overlook Midtown Park.

The property will also feature more traditional amenities such as a fitness center, a yoga room, a business center, open meeting spaces, a half-acre pool deck with a swim-up bar, a commercial kitchen and bar, and other cross-functional spaces.

The Midtown units will embrace some of the latest trends in technology. Products include smart-learning Honeywell thermostats with an occupancy sensor and Latch, an electronic entry hardware system that allows for near-field communication with a cellular device.

Caydon hopes to replicate its success with its first U.S. development, just down the street. LeRouax said that site, at Main and Drew streets, checked many of the boxes for residents. The attractiveness includes the walkability to public transportation, Midtown Park and the other local amenities.

"All of these things lead to a lifestyle that Midtown has that is difficult to find anywhere in Houston," he said. "It had a very familiar feel with our Midtown development being very similar to our Melbourne developments."

Check out more photos of the model apartment: 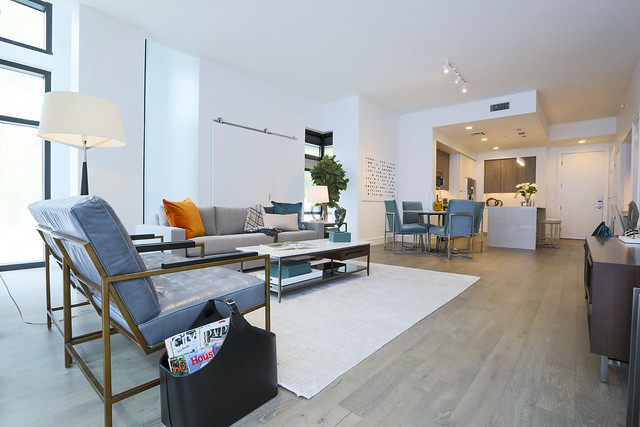