Three weeks after breaking ground in the Energy Corridor, D’Agostino Cos announced another office project. (You don't have to fulfill every New Year’s resolution in January, guys. Spread 'em out.) 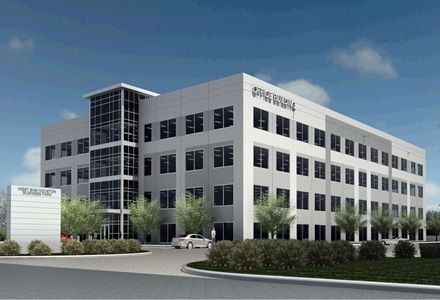 The Offices at Sam Houston will be a four-story, 113k SF property at the corner of Sam Houston Park and Houston Oaks drives (it’s along Beltway 8 between 249 and 290). It comes at a good time: Bryan D’Agostino says there are very few developable land sites in the area, but high office demand. CBRE’s Kristen Rabel, who's handling leasing with colleagues Steve Rocher and Parker Duffie, says the location will benefit from an extreme shortage of availability nearby. Several large tenants have already expressed interested, and she expects the property will lease up to one or two of them. 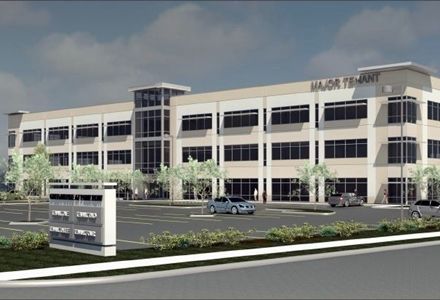 The Offices at Sam Houston will sit on 4.3 acres and feature 28k SF floorplates. Metzger Construction and Browne McGregor Architects are the construction team. D’Agostino Cos has 25 projects in the Houston metro, but this is only its second development within the City of Houston. The other is Greenhouse at Park Row (rendered above), which broke ground Jan. 6. We’re noticing a little design theme here. (And both properties allow only three cars per rendered parking lot.)

Jonathan Hicks joined EDGE Realty as VP. He specializes in retail tenant rep (Dunkin’ Donuts is one of his clients) and land sales. He most recently was a real estate consultant with Deloitte. 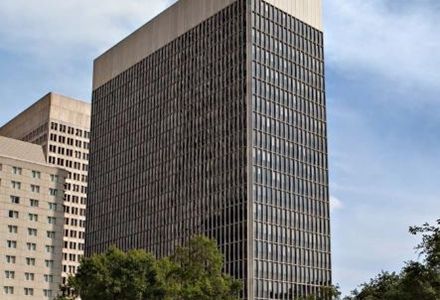 WP Carey (through CPA:17) acquired KBR Tower, a 22-story office property Downtown. The 390k SF building is at 500 Jefferson and is leased to KBR through June 2030. Nine other tenants occupy 9% of the building. WP Carey already owns KBR’s HQ at 601 Jefferson.

Lucky 13 Enterprises purchased 30k SF of land at the NWC of Fairmont Parkway and Lily Street in Pasadena to construct a Carl’s Jr restaurant. The tract is a pad site in front of 4949 Fairmont Pkwy, a Class-A office building. Colliers’ Marshall Clinkscales repped the seller. 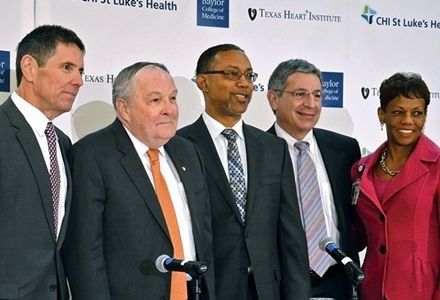 Baylor College of Medicine’s unfinished hospital is getting new life. Construction stalled in ’09, but now Baylor and St. Luke’s (now owned by Catholic Health Initiative) are partnering to complete and operate the property, which will be called Baylor St. Luke’s Medical Center and will open next year. (Above, the team at the announcement ceremony.) The property sits at Old Spanish Trail and Cambridge on Baylor’s 35-acre McNair Campus and will eventually replace St. Luke’s Hospital on Bertner Avenue. Baylor's partnership with CHI St. Luke's is unique; medical schools usually affiliate with systems but aren't part owners with them. 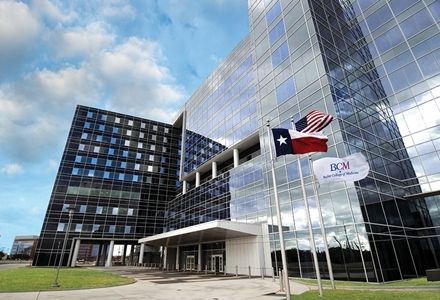 The exterior of Baylor St. Luke’s Medical Center (pictured) is already complete, and some of the interior is as well. The first phase of its build-out will be a 250-bed inpatient facility opening spring 2015. A second phase, adding 400 beds, will complete in 2018. The partnership will also develop a new cardiovascular center and comprehensive cancer center on the campus. Catholic Health Initiatives has not decided the fate of the current St. Luke’s Hospital building, but has announced that the property, which was built in 1954, would be expensive to renovate.

Commercial Resource Capital’s Jason Dannatt and Toby Kettle arranged financing for the Shoppes at Kingwood and the Tropicana Centre purchased by SPI. (We wrote about the properties here.) The loans totaled $59M and were non-recourse from CRC’s life company lenders.

Beech Street Capital and Multi Housing Advisors joined forces, giving Beech Street’s clients access to local broker intel and MHA’s clients access to capital markets. Since ’02, MHA has sold 80,000 apartment units totaling $2.6B across the Southeast and Texas. Beech Street has 10 offices around the country, including five in the Southeast and Texas, and provided $4B in multifamily financing in 2012.

CBRE is marketing Southway Shopping Center for RPD Catalyst. The 179k SF power center is on the NWC of 59 and South Gessner. It’s 100% occupied. Chris Cozby, Chris Gerard, and Kevin Holland are handling the assignment. The property was developed in ’76 and renovated between 2002 and 2005.