Mayor Turner On Houston's State Of The Market

From the 17th floor of Park Towers in Uptown, you can see nearly every corner of the Houston area with perfect clarity. It’s fitting then that execs would be on the top floor to discuss how they see Houston. 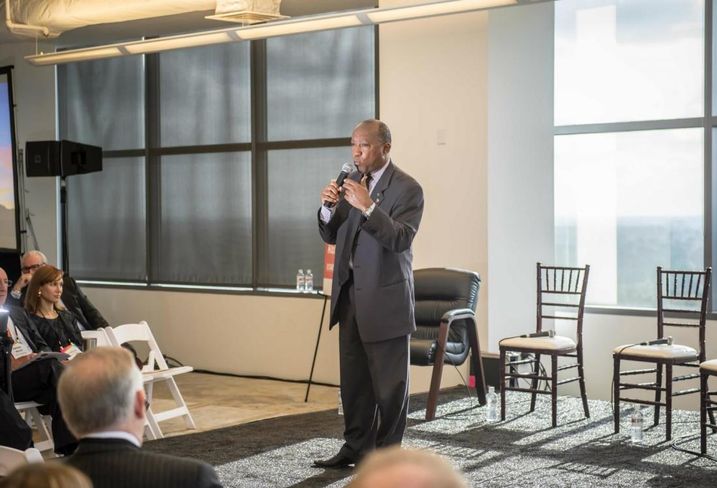 Mayor Sylvester Turner kicked things off at Bisnow's Houston State of the Market by sharing some interesting facts about the city.

Once a major cause for concern, the state of the city governance in Houston is now a strong point. Mayor Turner was successful in passing a worst-case-scenario budget for Houston almost a month before expected, correcting a $160M shortfall. The City of Houston is stepping up to confront issues head-on.

Another factor often swept under the rug is Houston’s growth. Mayor Turner pointed out that over the next 15 years the area expects to add more than 3 million people. That’s the equivalent of adding enough people to fill Chicago.

With that much growth, transportation will become an even more serious issue. The daytime population of Houston currently increases by 25% during the day as hundreds of thousands of residents commute into the city for work. 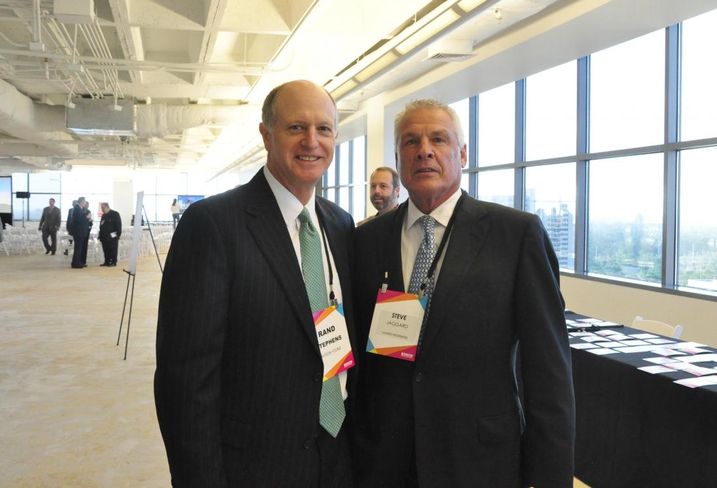 After Mayor Turner’s address, the panel discussion began with Avison Young’s Rand Stephens (above with Vantex Properties' Steve Jaggard), our panel moderator, saying this was the best downturn he’s ever been through. Director at VTS Ben Ramsey thinks Houston has gotten smarter by learning from past downturns. What Houston is going through right now is a stress test, nothing more. 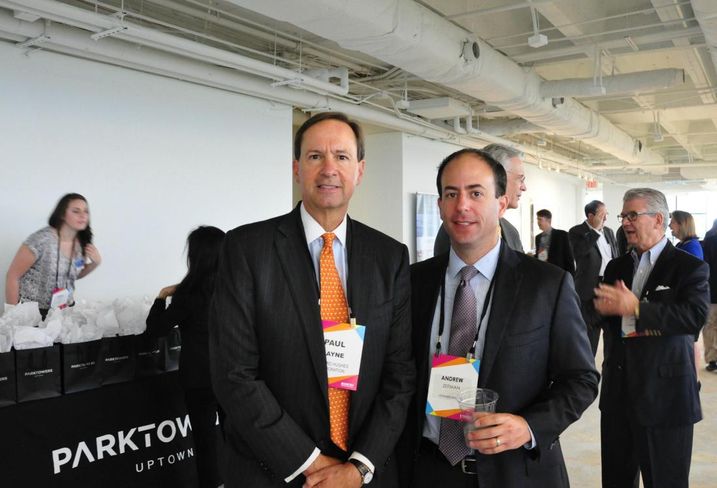 The reason these execs weren’t concerned is because despite headlines, oil and gas giants are not nearly as distressed as major news outlets would have them seem.

Howard Hughes EVP Paul Layne (above with Howard Hughes colleague Andrew Zeitman) was Exxon Mobil’s landlord for years and has worked closely with the firm on its big move to The Woodlands. Paul knows better than most that oil and gas giants think long term.

They’re not thinking five to 10 years out, they’re thinking 30 to 40. The cap-ex cutbacks and layoffs aren’t necessarily an attempt to stop the bleeding, but rather a way to build strength into other parts of the business. Right now the O&G giants are building up reserves in hopes of making serious acquisition moves when smaller outfits start to falter. The slowdown is more like the calm before the storm. 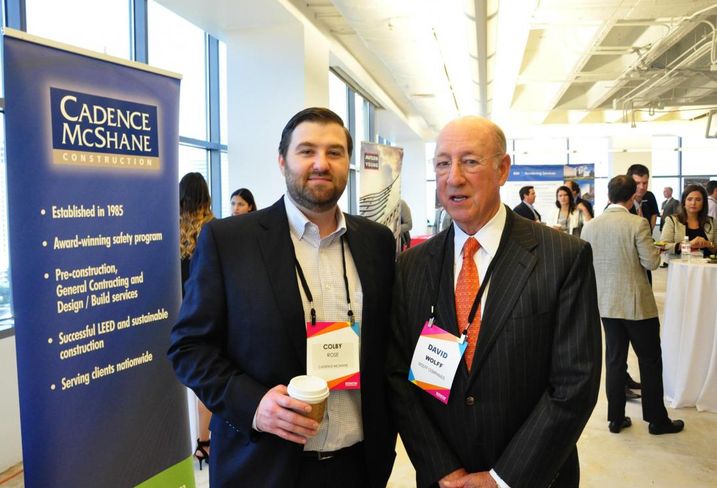 David Wolff (above with Candence McShane's Colby Rose) is unphased by what’s going on in Houston, and said he’s seen all of this before. David agrees with Paul that Houston is in the midst of a long-term play, especially in real estate.

Ed remembers when The Woodlands was founded, it too was a long-term play, losing money for it first few years. Just look at the area now. To David, the biggest factor no one is talking about in Houston is the state of finance. Interest rates remain remarkably low and the availability of capital is surprisingly abundant. Ownership is stronger than in past downturns, and leverage on buildings isn’t a house of cards as it was in Houston’s dark times. 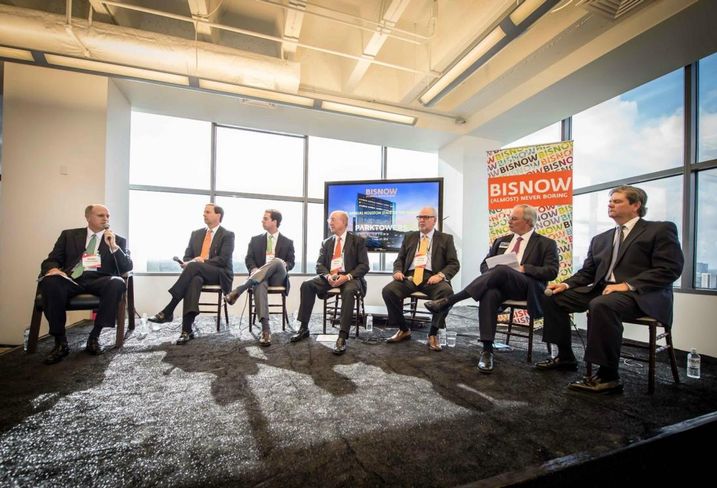 Colliers' Bob Parsely (second from right) pointed to supply being more constrained than most think. In 1982, there was around 98M SF of office space across the city. By ‘88, that had skyrocketed to more than 180M SF, leading to the infamous see-through offices of the '80s. Three years ago, Houston had around 200M SF of office space, now we’re at 230M SF. 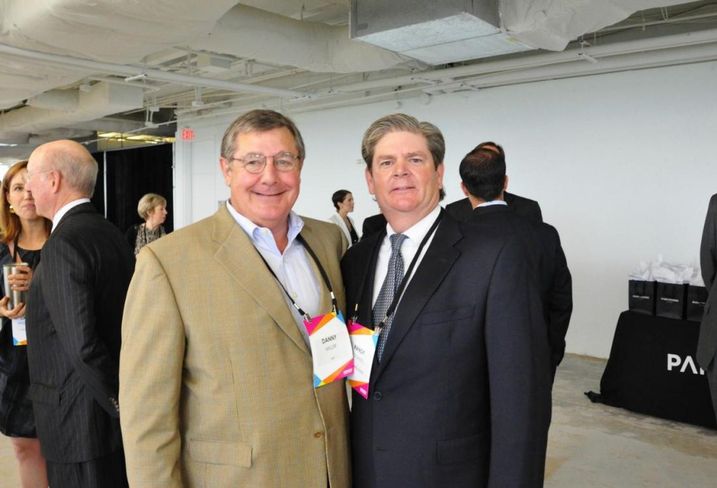 Strong ownership has worked in tandem with coming off the tail end of a very strong business cycle. Randy O'Donnell (right, with HFF's Danny Miller) of O‘Donnell/Snider Construction claims the past two years have been the best two years they’ve ever had. The heights Houston reached in recent years has acted as a counterbalance to the recent downturn. 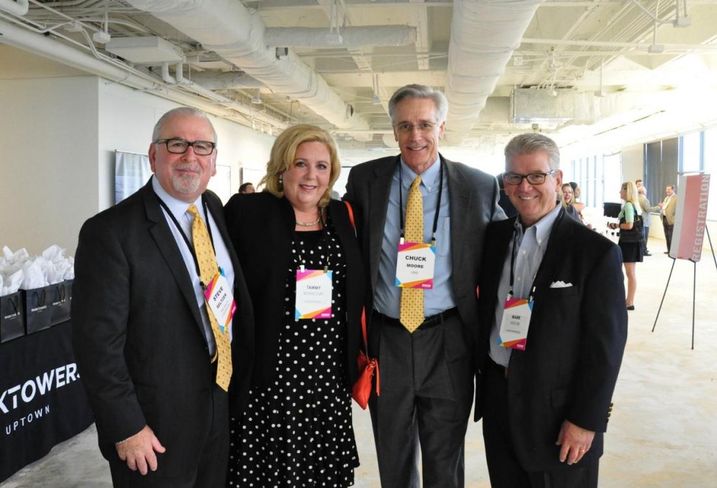 The submarket has gotten a lot of press but TPMC EVP Steven Seltzer (above with BOMA's Tammy Betancourt, CBRE's Chuck Moore and Mark Kidd of M Kidd Properties) isn’t worried about that either.

Steve says the sublease space out there simply isn’t competitive. Major players aren’t interested in short-term leases with a litany of stipulations. Plus, tenants don’t want to do business with landlords under distress. Tenants need to know that the landlord will stay around. 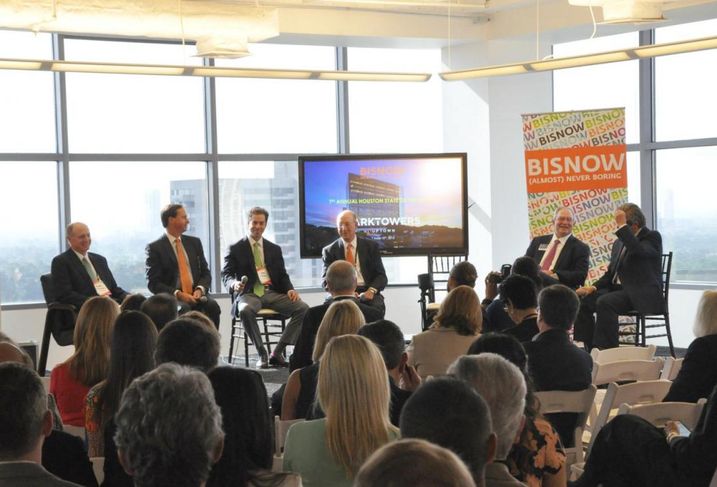 David Wolff has seen a downturn or two. They’re a topic of conversation between him and longtime friends Jeff Hines and Walt Mishcer. When they sat down to look at activity during previous downturns they realized the best deals always happen in the figurative fourth quarter of a downturn, the key is positioning yourself when that happens. That’s why Wolff Cos is keeping assets as liquid as possible in financial markets so it can move when opportunity arises.

Next time you see a headline about the price of oil, think about the state of city government, Houston’s continued growth, the underlying strength of oil and gas giants, the strength of financial markets and building ownership, and the fact Houston is coming off an amazing upswing.