Build To Rent Is Getting More Affordable, But That Is Under Threat

Build-to-rent residential housing was supposed to help solve Britain's housing crisis. Both the Conservatives and Labour have backed BTR as a sector that can provide good quality, affordable housing, especially with house prices remaining unaffordable in many parts of the UK, particularly in major cities.

The sector is growing fast, with the number of homes in the pipeline up 22% last year to 140,000, according to data from the British Property Federation and Savills. But is it meeting that objective of making housing more affordable? 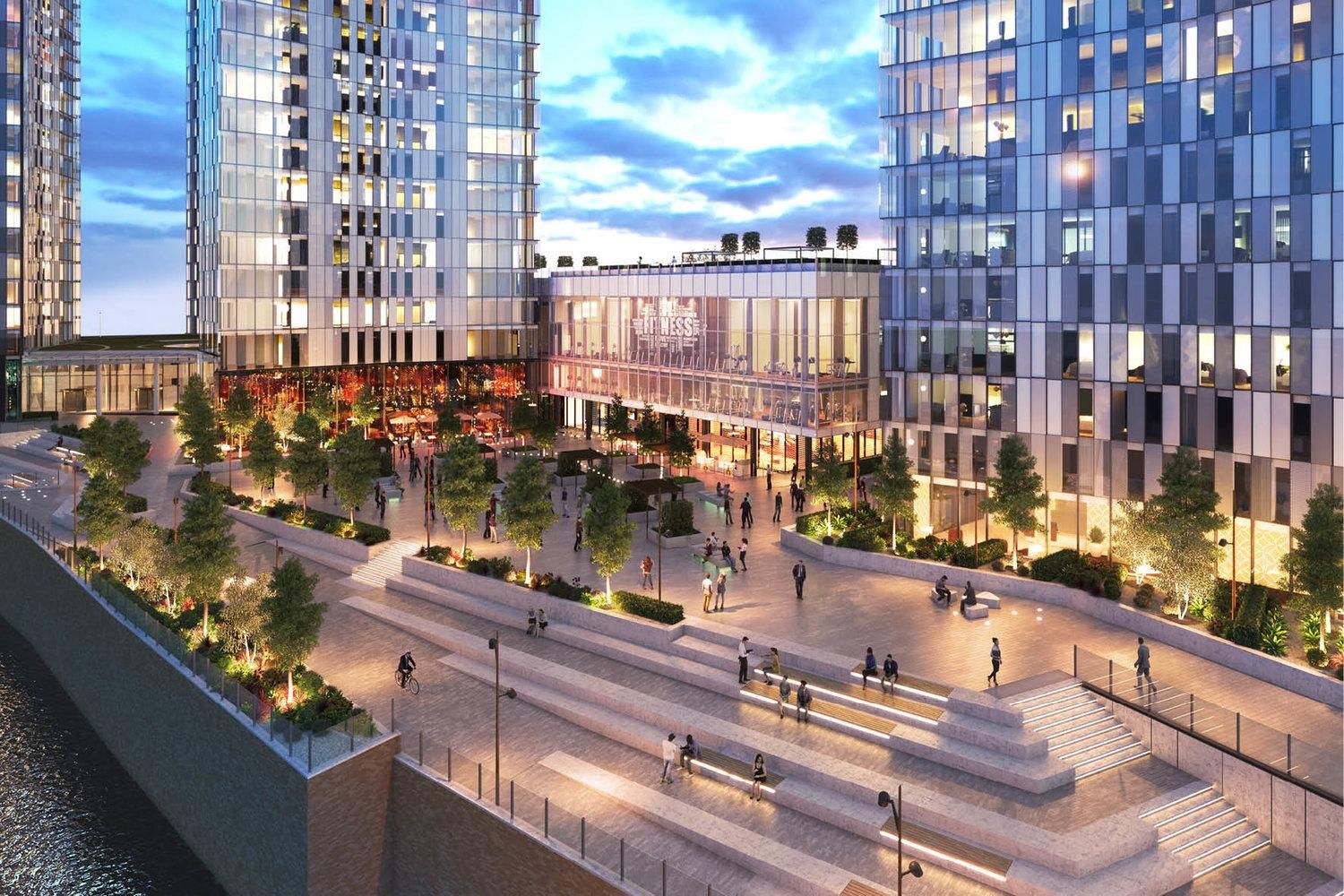 The headline data suggests that BTR is a little bit more expensive than existing rental stock, but not much — and this broad figure is perhaps a bit misleading.

And those in the sector argue BTR is fundamentally changing the landscape of UK rental housing for the better: improving the quality and the security of tenure, and making it harder for landlords to rip tenants off.

The problem is, a lot of the positive effects are subtle, difficult to quantify, and take time to come through. In the meantime, the BTR sector in London is facing a grave threat which may cause a drastic slowdown in the delivery of new units.

Savills recently examined the construction cost and asking rent of a sample of existing UK BTR schemes and found that, while a lot of the coverage of new rented residential might focus on fancy amenities, BTR is not overly skewed toward the prime end of the rental market.

The median build cost of the schemes it looked at was £600 to £650/SF, which implies the average scheme is far from luxury — prime schemes cost about £1K/SF to build.

And an examination of rental levels showed there was a strong correlation between BTR rents and median rents in a new scheme's location, albeit the BTR rents were higher than the existing average. The distribution of rents indicate it is easier to build studio and one-bed units that are in line with existing rents. Two- and three-bedroom were more expensive compared to existing rents.

Some of the major players in the market think that the subtlety and difficulty in analysing the cost of living in BTR schemes makes it look more expensive than it really is.

“If you go on to a property portal online and want to compare two properties, the way you do that is by looking at rent,” said Dan Batterton, Legal & General Investment Management's head of build to rent. “We think it is more important to look at cost of living rather than just rent.”

His argument is that the rental payment at most BTR schemes include many fees and charges which residents in “buy-to-let” rented stock owned by individual investors have to pay on top of rent, like internet, utilities, letting fees and even gyms. Many large BTR operators have also done away with deposits, which usually equate to between four and six weeks’ rent.

“If you include that and look on a like-for-like basis, something like our [200-unit] scheme in Brighton is actually about 20% cheaper than existing rental stock in the area,” Batterton said.

An interesting natural experiment cropped up at Grainger’s Argo scheme in Canning Town, according to Director of Investments Andrew Saunderson. Some of the units in a similar neighbouring development were sold to buy-to-let investors. Rents were not significantly higher for the Grainger-managed BTR units with better amenities and services. 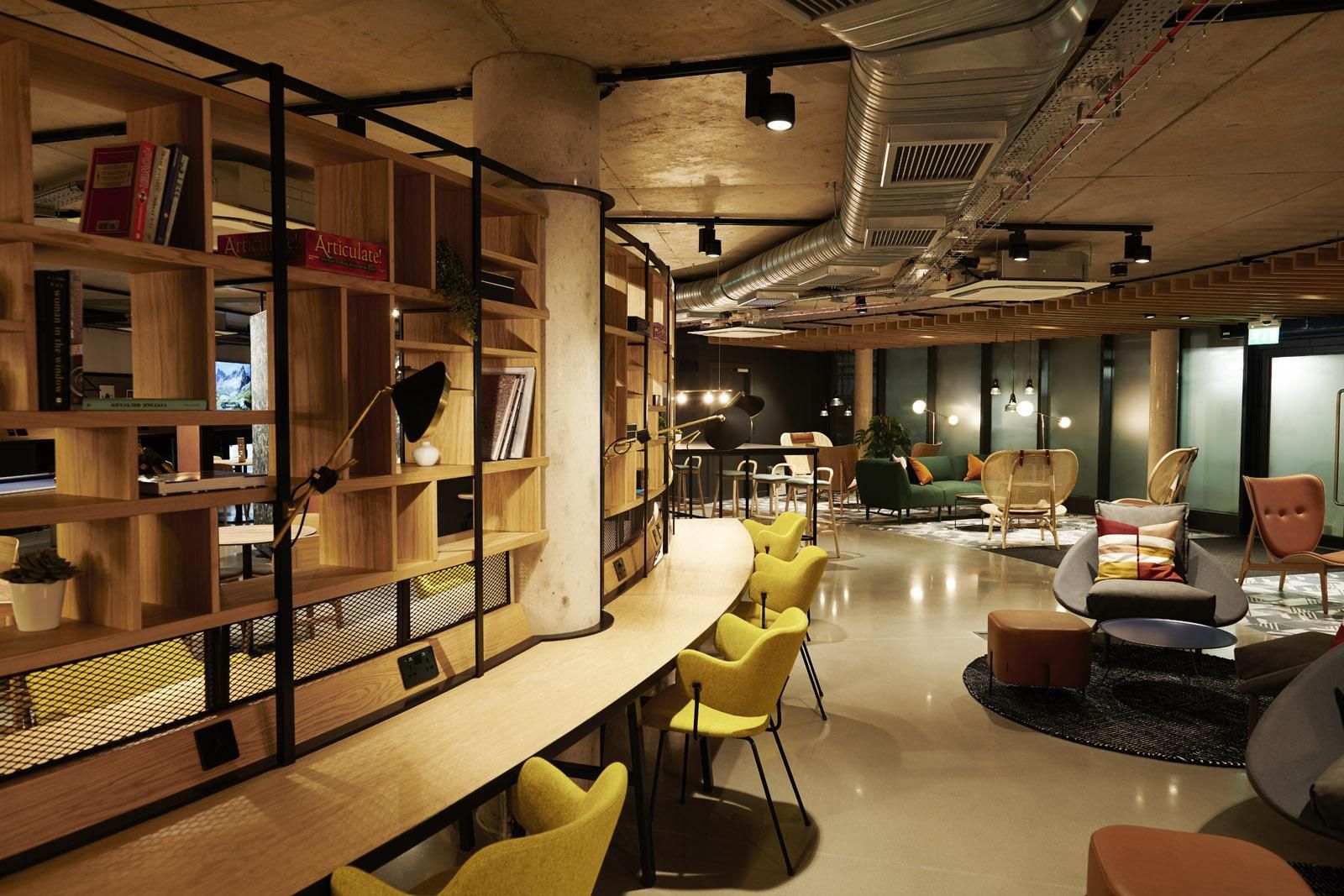 “I think [it] is about accessibility rather than affordability,” Quintain Director of Build To Rent Michael Allen said. The company is building the UK’s largest BTR scheme at Wembley Park in London, with more than 5,000 units. “Firstly, you can walk in here and I can get you a new apartment that day. Secondly, you can rent a much nicer home than you can buy.

“It’s like car leasing, you might only be able to afford to buy a Honda, but you can lease something much nicer. Most BTR operators are trying to build the best quality product at the most affordable price.”

Batterton argued that building high-quality, well-managed rented homes with appealing amenities and services for tenants has a knock-on effect on affordability in the wider market as well, although this is difficult to quantify.

“If you look at what has happened in Manchester [where L&G is building a 225-unit scheme called the Slate Yard] we haven’t built a luxury scheme, but we have come in and replaced the top rent in the market, and the rent of our competitors in the buy-to-let space has got cheaper. People are already paying as much as they can on rent, so if something better comes along, then everything else gets discounted.”

The economics of BTR, especially at this early stage of the sector’s evolution, mean that it is simple business sense to try and make schemes as affordable as possible rather than going for prime rents.

“We see ourselves as mass market rather than building something luxury and prime because there is simply a smaller number of people who will lease that product,” Saunderson said.

Grainger has a formula it uses when assessing whether it can build a scheme that is affordable in a particular area: the monthly rent it would need to charge multiplied by 30. That gives it the salary someone would need to earn to comfortably afford to rent the unit. If the demographics of an area indicate plenty of such people, then a scheme is viable.

Batterton said when a developer builds a very large scheme like L&G’s 500-unit development in Wandsworth, south west London, it is virtually economic suicide to make it more expensive than average rents in an area.

“With a large scheme you are almost flooding a market with new rental stock,” he said. “That forces you to make rents affordable.”

As an extension of this, at the moment, there is no indication that BTR schemes are unaffordable.

“We are not seeing any schemes that are up and running operating with significant voids,” British Property Federation Director of Real Estate Policy Ian Fletcher said. “That would indicate they are being priced at levels people can afford.”

A big barrier to making BTR affordable is its business model. Land prices and construction costs are at elevated levels in London and other major UK cities. And it is hard to compete with developers of build-for-sale residential: A BTR developer has to build a scheme, and only then can it start to rent it and generate income. A build-for-sale developer can sell units off plan to fund development costs, meaning it can usually pay more for land. 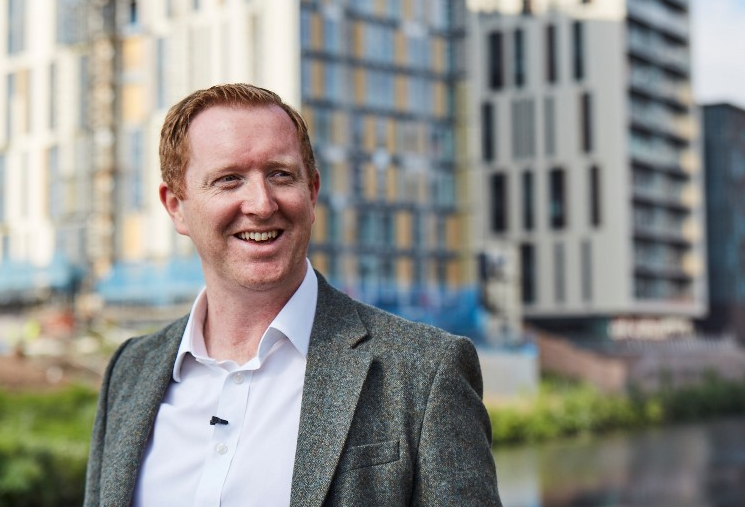 So how are BTR developers competing and also keeping things affordable for customers? A slowdown in the market in homes for sale has helped.

“We are seeing more and more house builders wake up to the benefits of doing deals with us,” Saunderson said. “They can sell part of a scheme to us and derisk it and reduce their market exposure.”

Joint ventures with local authorities and public bodies are also becoming more prevalent. Earlier this year Grainger agreed a partnership with Transport for London which will see it build 3,000 BTR homes on sites around TfL transport hubs, the first scheme being in Canning Town, East London. A minimum of 40% of the units will be affordable, meaning a significant discount to open-market rents. Saunderson said such deals are good for both sides: TfL has certainty that it will receive a payment, income from the homes and an agreed level of affordable housing. Grainger has more certainty on land value, which is reflective of the affordable housing provision.

Batterton said that scale is important when it comes to reducing costs: When spread across 500 rather than 100 units, the cost of amenities like gyms or on-site management is lower per apartment.

The level of amenity of course influences the cost of a scheme and the rent that needs to be charged, and as the market matures over time, a more differentiated offering will come about.

“If you look at the hotel market, there is a range from budget through to five star,” Saunderson said. “If you look in Salford, rents at our Clipper Quay scheme are around £16/17/SF, where some schemes in Manchester are north of £25/SF. Customers are price sensitive and will choose the product they want accordingly.”

One demographic not being served in UK BTR at the moment is families, particularly in London. Savills data showed that two- and three-bedroom BTR units, those which would be sought after by people with families, are the most likely to be significantly more expensive than median rents.

It is a tough nut to crack: The economics of BTR do not lend themselves to larger apartments. But some developers are getting creative to try to appeal to families.

“If you look at the dynamics of BTR, it is exactly the same as the buy-to-let market: Three- and four-bedroom homes are typically not rented, because they are too expensive,” Quintain’s Allen said. “But we are looking at the requirements of families and children and trying to work those into our scheme.”

At the Canada Garden building at Wembley Park, Quintain is including an indoor children’s play area the size of an average apartment, so families do not need as much space inside their apartment, as well as an outdoor play area with sandpits, paddling area and replica ship. 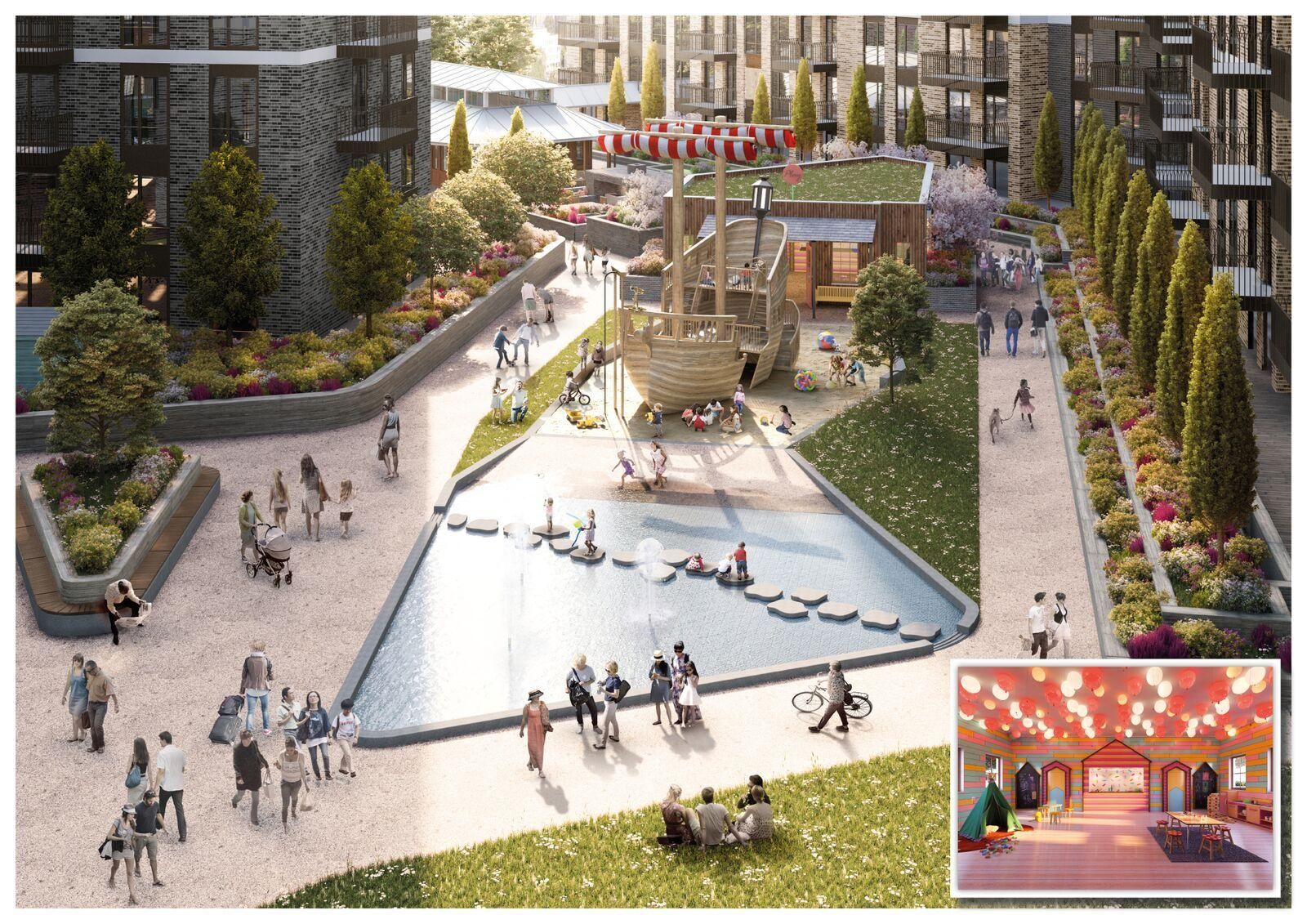 And at a building which has just been designed but not yet commenced, some two-bedroom apartments are being designed with one large bathroom for a family, rather than one en-suite bathroom and one shared bathroom, which would appeal to two people sharing. The extra space is given over to the communal living space and kitchen.

The fact that the positives regarding affordability in BTR don’t necessarily show up in the headline rents means that the sector is facing a grave challenge in London. The draft of the mayor’s new London Plan, the document revealed last year that determines London planning policy, contained an unexpected bombshell.

Under proposed rules, BTR schemes would be required to provide 35% affordable housing, the same level as schemes built for sale, with at least 30% of those affordable units being at the London Living Rent, a discount of about 30% to typical market rents.

“That policy would turn off the spigot of new units,” Allen said.

“There is a desire to make all affordable housing in new developments social housing, but we think it is difficult to make that work with BTR, and makes it hard for BTR to compete with build-for-sale,” the BPF’s Fletcher said.

The policy would mean that build-for-sale developers could pay 30% more than BTR developers for land, the BPF said.

“We worry about what would actually be delivered if this policy comes in to place. BTR has the potential to deliver genuinely mixed communities, and we need a route between social housing and premium apartments. It was an eleventh hour change to what we were expecting.”

The planning inspectorate will report back soon on whether any elements of the London Plan should be changed, including the rules about affordable housing in BTR schemes. About 20% of all new homes being built in London right now are BTR units, according to Molior. If that spigot does get turned off, that is a lot fewer homes being built.

The benefits of BTR are subtle and tricky to quantify. They need to be made explicit if the sector is going to get the chance to prosper.

How The Big Beasts Of BTR Are Using Data To Succeed

Survey: What Does The Future Hold For UK BTR?