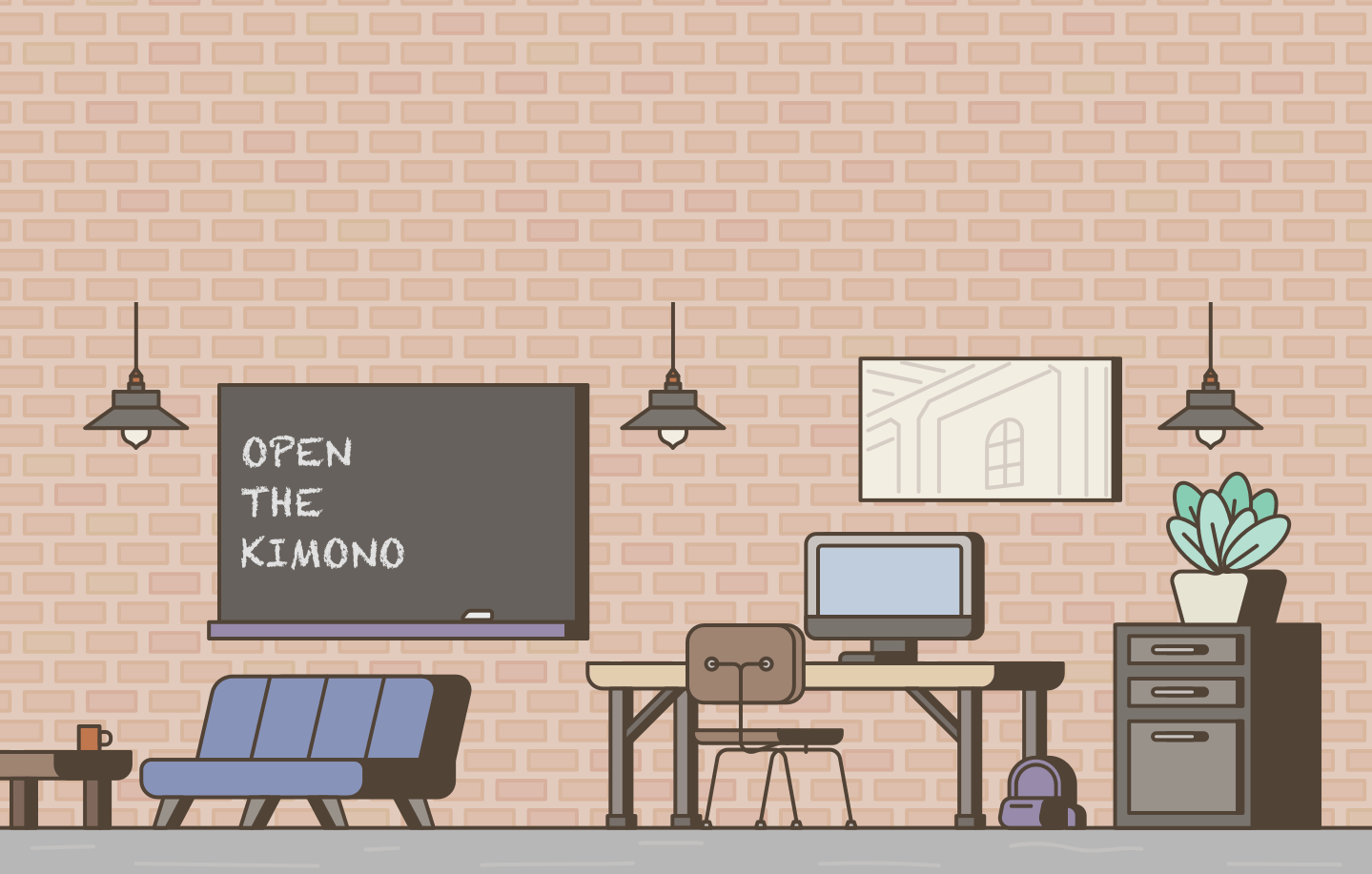 An Inside Look At Toms' Creative Office Headquarters In Playa Vista

The first reaction many people have when they visit shoe brand Toms headquarters in Playa Vista is to gasp in disbelief.

The office space looks more like a playground than a traditional workplace. There are two blue plastic spiral slides in the middle of the building. There are bleacher seats, a barista, a fitness center and dogs resting next to their owners. 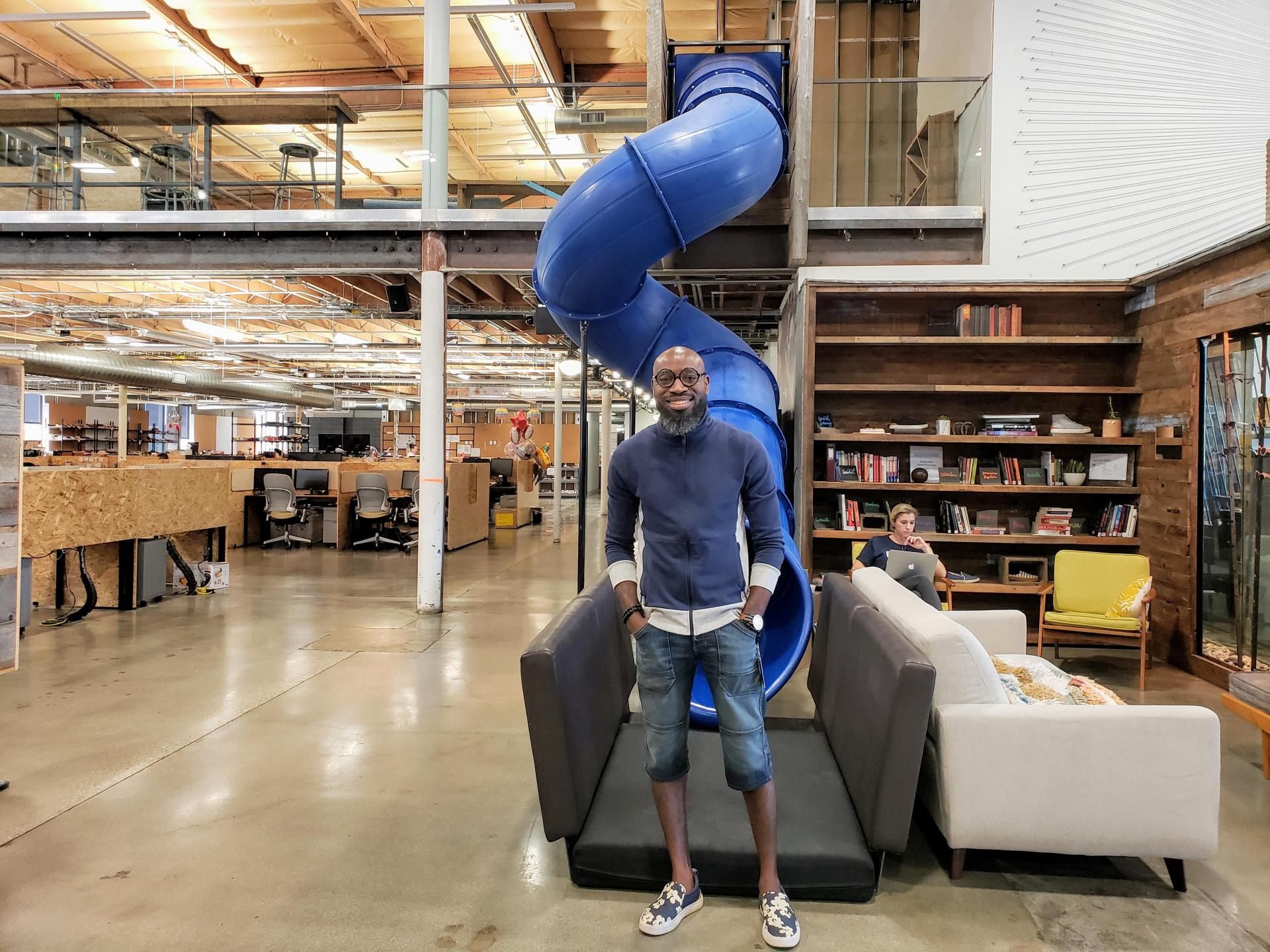 "It's like, they go, 'Oh, wow. You work here?'" Toms Facilities Coordinator Peter Efezokhae said. "Most people have never seen an office like this."

Efezokhae serves as a sort of company historian and tour guide.

Toms headquarters epitomizes the growing trend of turning old warehouses into creative offices. Many businesses, especially startups, are ditching the traditional office space with compartmentalized cubicles and rooms, fluorescent lights and linoleum floors for open space warehouses to design however they want.

Many of these creative office spaces are a way to reflect the company's values, attract new workers and adjust to a changing workforce.

"It doesn't matter where you work or how you work," Efezokhae said. "At the end of the day, it's about getting the job done."

Built in the early 1970s, the industrial building owned by Karney Properties was once a warehouse with 10% to 15% office space with the rest warehouse space.

The building was home to Hollywood visual effects company Rhythm & Hues before Toms took it over in 2011.

Founded in 2006 by Blake Mycoskie, Toms' former headquarters in Santa Monica was a warehouse with no windows and stacks of boxes, Efezokhae said.

Today, the headquarters designed by Shimoda Design Group is a bustling and thriving creative office. Workers move from workstation to workstation and collaborate in different areas of the office.

Inside is a hub of creative energy that is fitting for a socially conscious company with a one-for-one model — for each pair of shoes purchased from Toms, the company matches it with a pair of new shoes for a child in need. 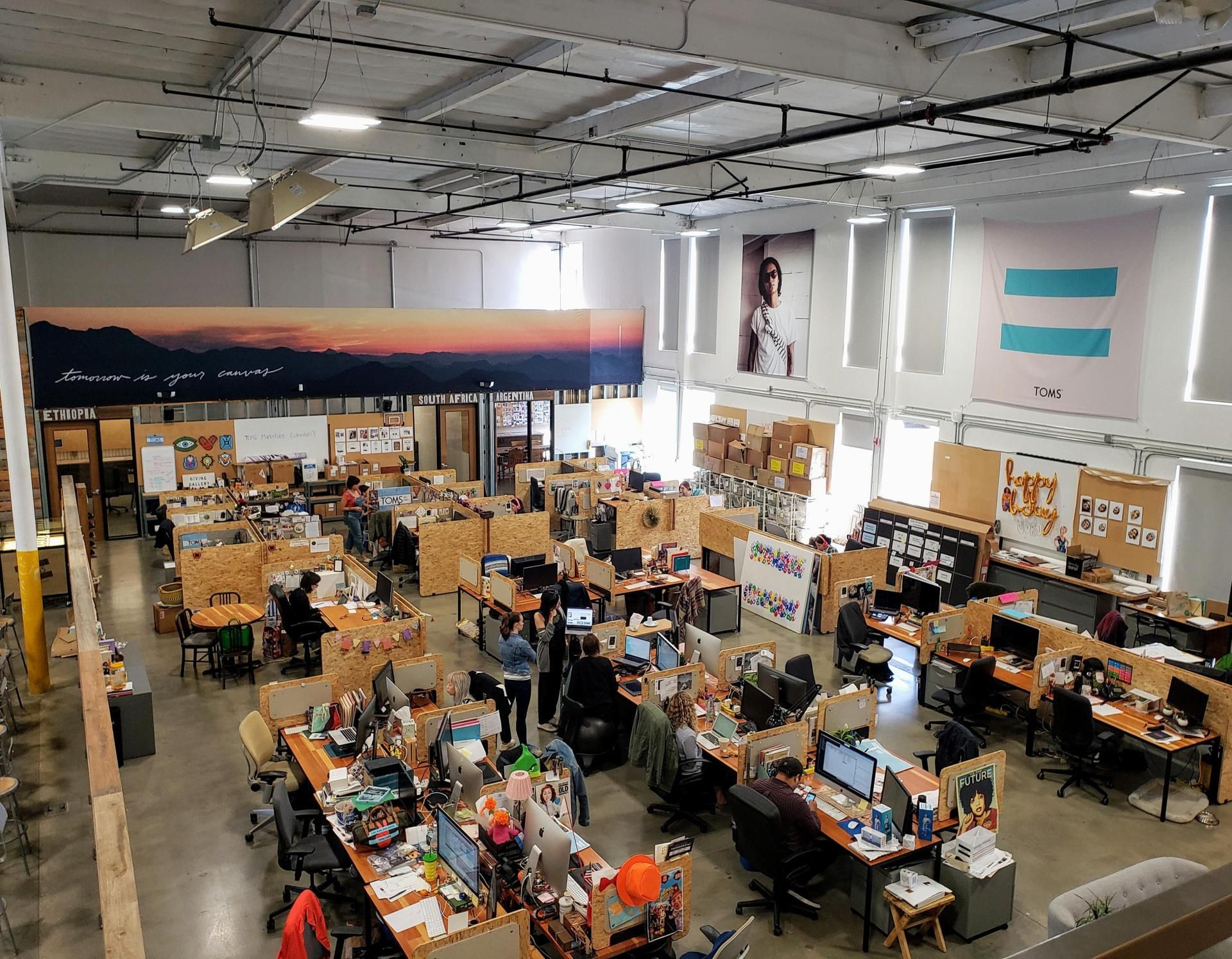 The company has given more than 60 million pairs of new shoes to kids in need in 70 different countries. In 2011, the company replicated the model when it developed eyewear. For every pair purchased, Toms helps restore sight to a person in need, whether glasses, surgery or medical treatment.

The creative office highlights the company’s story and mission.

An area called The Barn features a towering barn-styled wood door. The meeting room is a reminder of the company’s humble roots — a barn in Argentina where Mycoskie, the company's fonder, got the inspiration to create a shoe company and at the same time give back to needy kids.

Other conference rooms are named after the places and countries where Toms’ has donated shoes, including South Africa, Argentina and Ethiopia.

The more than 200 employees work in an open area with exposed ceilings in cubicles made out of reclaimed wood.

There are several lounge spaces with couches and chairs, a kitchen, a research and development lab and a wellness center with daily exercise classes.

Walls have quotes such as “Never doubt that a small group of thoughtful committed citizens can change the world. Indeed it is the only thing that ever has,” “It’s kind of fun to do the impossible,” and “Tomorrow is a canvas.” One wall has a map of all the places where Toms has given.

The finance room was renamed “Funance.” 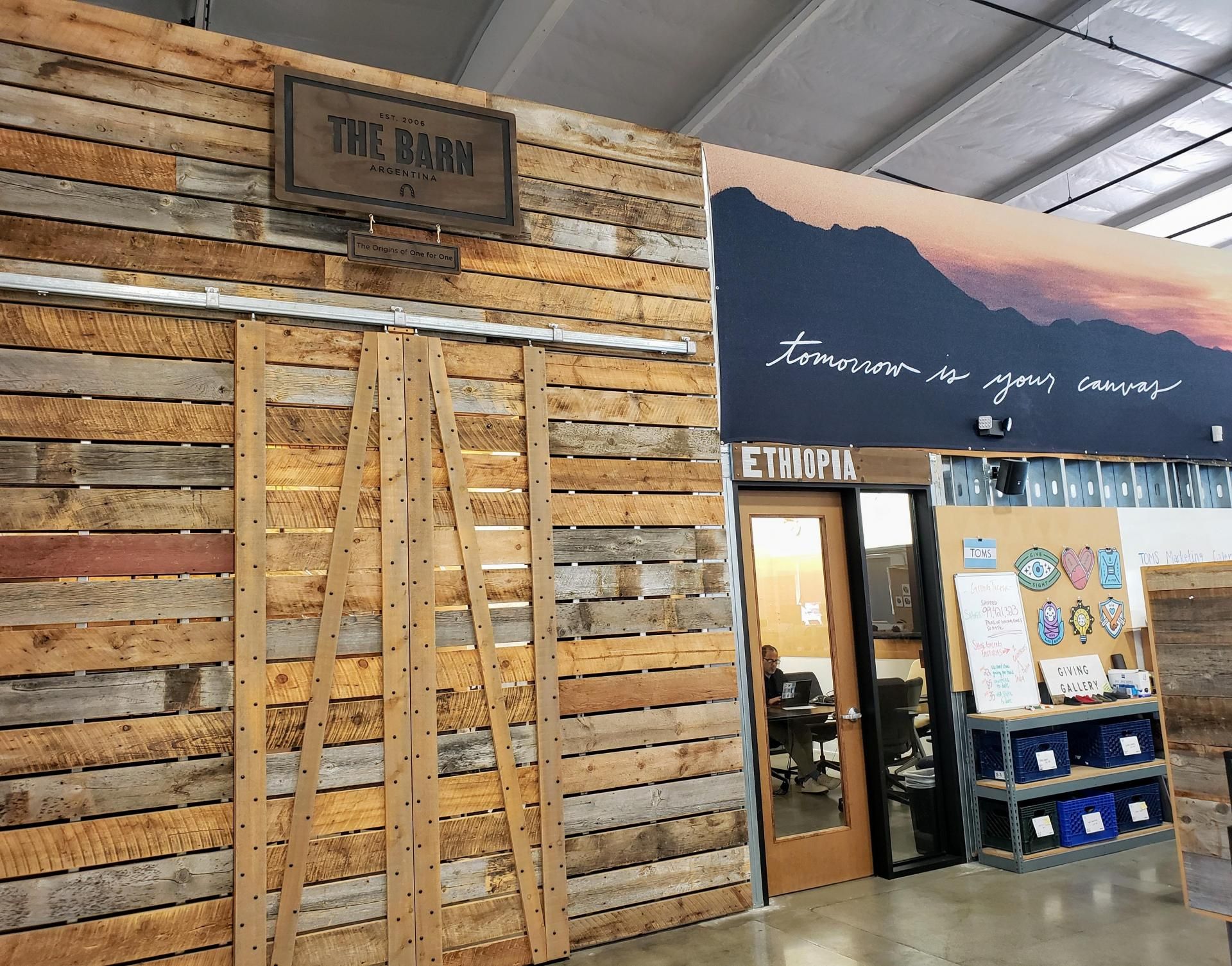 Outside, there is a performance stage, picnic tables, barbecue grills, a dog trail and a patch of artificial grass where workers can lounge and work.

Efezokhae, who has been with the company for six years, said the best part of working at Toms' is that employees are encouraged to go to the countries where the company partners and gives back.

The company pays for employees in their first, third and seventh year to go to a different country and do charitable work for one week, he said.

"That's what got me," he said, reflecting on one trip donating shoes to children in El Salvador and another helping restore kids' eyesight in Africa. "You see how our work here in this office is actually making a big impact around the world."

CORRECTION, MAY 20, 5:04 P.M. PT: A previous version of this story had the wrong date for when Toms was founded. The company started in 2006. The story has been updated.

A New Wave Of Demand And Design Is Changing Industrial Buildings