The Dublin Schemes We're Likely To Be Talking About In 2019

From the completion of a large-scale urban renewal project to the overhaul of a 1970s brutalist landmark, Dublin is set to take delivery of several notable schemes in 2019.

Together they’re big, they’re bold(ish), they’re promising a lot of foliage on their roofs and terraces, and they’re helping change the look and feel of the city.

We’ve cast an eye over just a few of them. 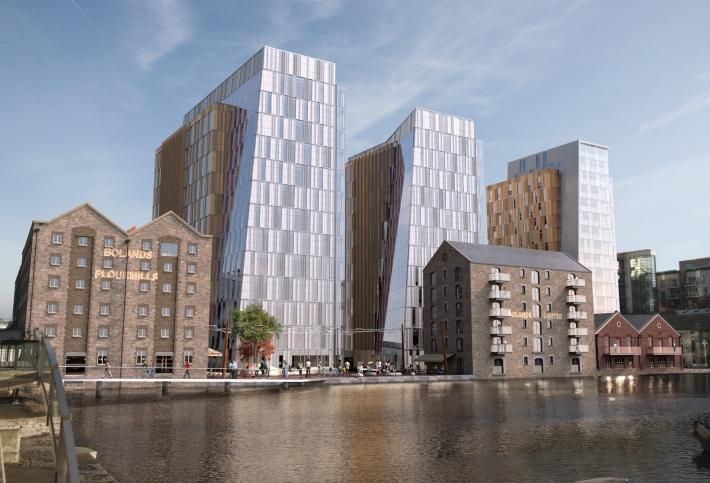 Bolands Quay
The space may already be spoken for but the phased completion in Q3 and Q4 of the two imposing office blocks in Bolands Quay will mark a significant step in the transformation of the Grand Canal area.

Google paid €300M to buy the entire Bolands Quay scheme last year. The company will be keeping the 301K SF office element for its own use and appointing a letting agent to manage the rest of the space, including an apartment block that will be completed in 2020. 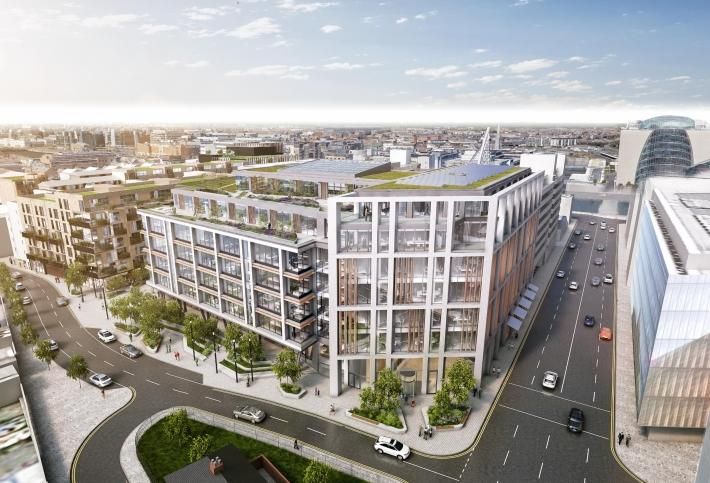 According to CBRE Executive Director Office Agency & Business Development Mark Smyth the 202K SF block is one of the few schemes of scale that will deliver this year that is still fully available. He said the building would be suitable as a single let or to be split vertically for two HQs of around 100K SF each.

The overall development also comprises nearly 12K SF of retail space and a block with 56 residential units. It's not clear yet whether these apartments will be sold individually or as a BTR investment. 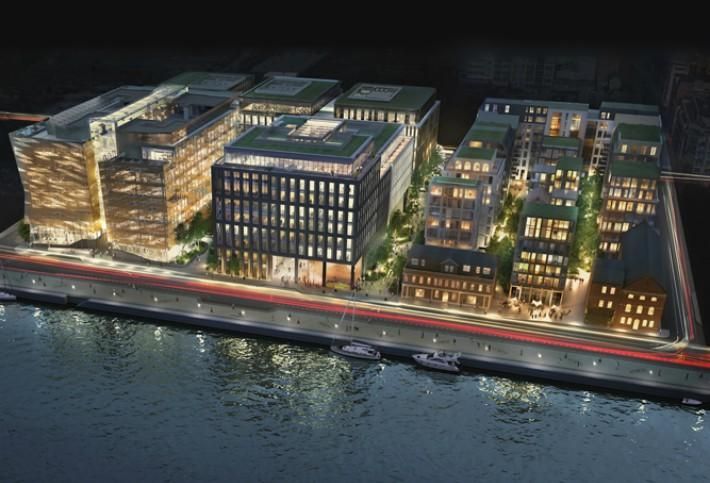 Located to the rear of the Central Bank of Ireland and Dublin Landings 1 and 2, the three buildings comprise around 310K SF of office space, all of which is understood to have been let.

Developers Ballymore and Oxley Holdings have sold the other two blocks in the scheme — Dublin Landings 1 to German fund Triuva for €160M and Dublin Landings 2 to South Korean REIT JR AMC for €106.5M. It seems likely that the three remaining buildings will also be brought to market in the coming year. 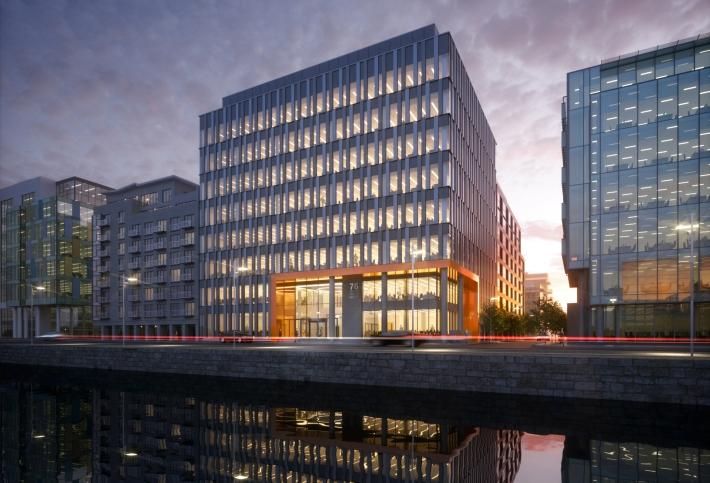 76 SJRQ
Offering just over 75K SF of office accommodation, 76 SJRQ isn’t exactly the largest building on the block. Savills associate Kellie O’Brien said it is notable, however, for being one of the last waterfront opportunities in the south docklands.

Located toward the eastern end of Sir John Rogerson's Quay, the scheme was the first to be granted planning permission — back in March 2015 — under the North Lotts and Grand Canal Dock SDZ. 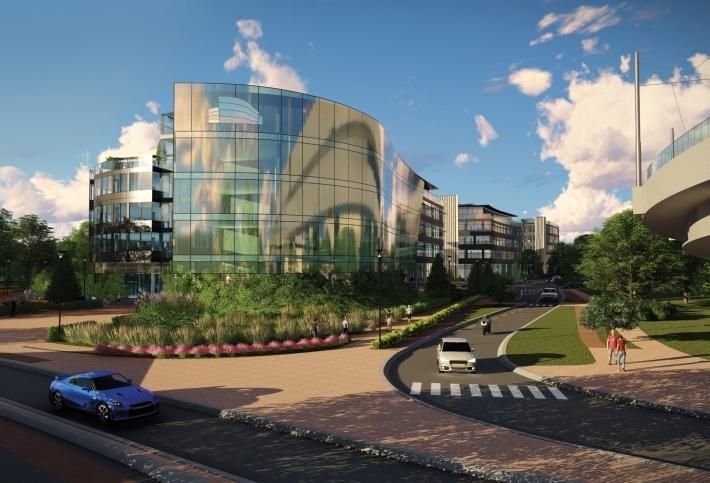 Courtesy of JLL
Artist's rendering of One South County in Leopardstown

One South County
One of the more interesting schemes to reach completion outside the city centre this year will be One South County. It's the first block in Cyril McGuire’s three building scheme that will eventually create 285K SF of new office space in Leopardstown.

Due to be delivered at the end of March, the 145K SF One South County is positioned at the front of the South County Business Park, which includes occupiers like Microsoft, MSD, Icon and Accenture. 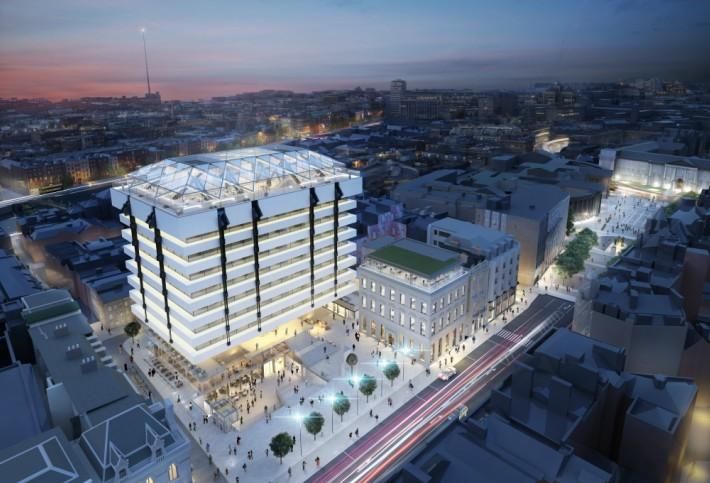 Central Plaza
The redevelopment of the Sam Stephenson-designed former Central Bank of Ireland building on Dame Street is also due to be finished by the end of the year. WeWork has signed up for all seven floors of the 73K SF of office accommodation in One Central Plaza.

The 60K SF retail element, meanwhile, will include nine food and beverage units and 2.7K SF of outdoor terraces. Space is available in the former bank building as well as in the adjoining 9 College Green and 6/8 College Green. According to letting agent BNP Paribas Real Estate, a number of retail leases are close to signing but no names have yet been announced. 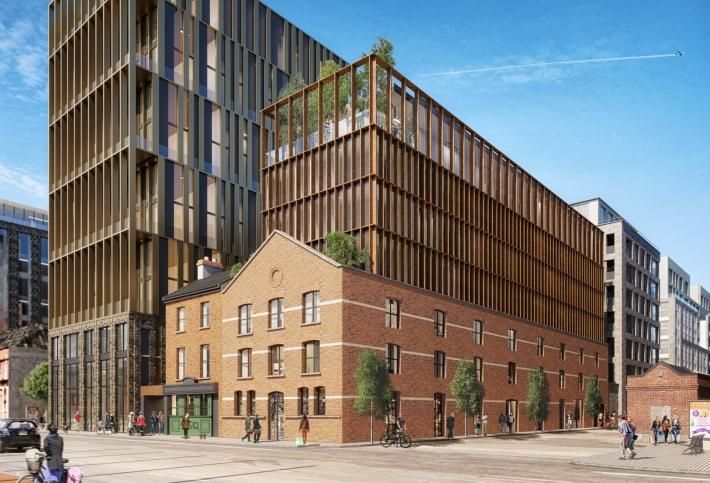 Hotels galore
Dublin’s hotel stock got a long overdue boost with the addition of 1,500 rooms last year and, according to JLL director Daniel O’Connor, we can expect more of the same in 2019 with a similar number of rooms and at least five hotel completions on the cards.

The first of the new arrivals, scheduled to open later this month, is the eight-storey 202-bed Aloft Dublin in Blackpitts, Dublin 8. The area will also be home to Ireland’s first ever Hyatt when the 234-room Hyatt Centric opens for business in the Liberties in May.

The biggest of these properties will be the 300-room Marlin aparthotel on Bow Lane, which is expected to start trading in August. Ireland will also be getting its first Moxy — Marriott’s “affordable chic” chain — with the opening of Tetrarch’s 152-room budget property on Sackville Place.

O’Connor said one of the most exciting new openings this year will be The Mayson Hotel at 80-82 North Wall Quay. The Oakmount scheme is expected to open in June. 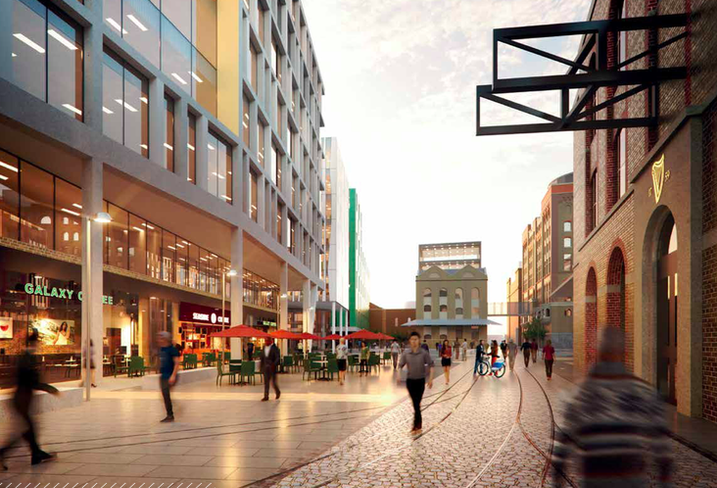 Courtesy of Diageo
A rendering of what part of the St James's Gate scheme could look like.

Guinness redevelopment
Finally, while it certainly won’t come to fruition in 2019, we should find out more about how 12.6 acres of land at Diageo’s St James’s Gate in Dublin 8 is to be redeveloped over the next few years. Diageo launched its search for a development partner to create “one of the most dynamic urban quarters in Ireland and Europe” in October 2017 and had reduced its shortlist of potential names to just three by last September.

Potential partners still in the running are Hines, Ballymore and Oxley and U+I. Diageo has said it will make its final decision by March 2019.

The site for redevelopment, which is adjacent to the Guinness Storehouse, could potentially accommodate 680K SF of office space, 54K SF of retail and 237K SF of hotel and leisure, as well as 500 new homes, according to a feasibility study submitted to Dublin City Council.