More than four years in the works, co-developers Oaxaca Interests and Wood Partners finally got the building permit issued; construction will kick off on the 49k SF grocery-anchored mixed-use Sylvan Thirty in late February. 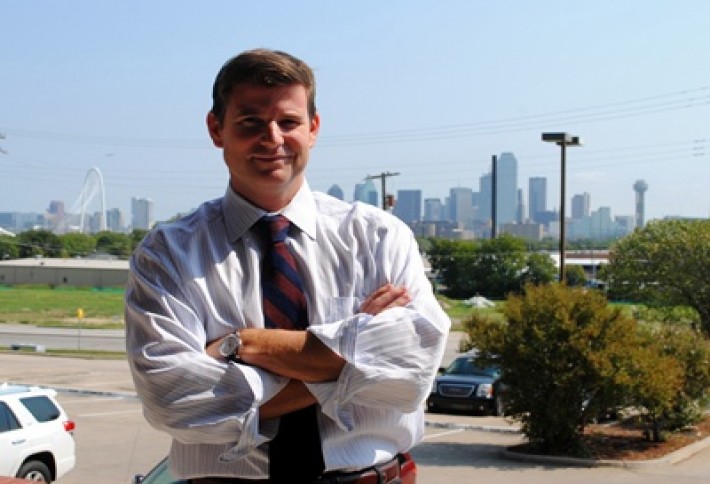 Oaxaca Interests prez Brent Jackson tells us Cox Farms Market and other tenants should begin to open for business this fall with 201 studio apartments scheduled for move-in at the beginning of 2014. At the intersection of Sylvan and Fort Worth avenues (at 1818 Sylvan), the project is at the crossroad of West Dallas and North Oak Cliff, just north of Kessler Park. Brent assembled nine parcels of land(starting in 2008). The retail portion will feature smaller footprints for retailers with a food focus. Brent tells us he'll have third-party management, but Oaxaca will take space there. 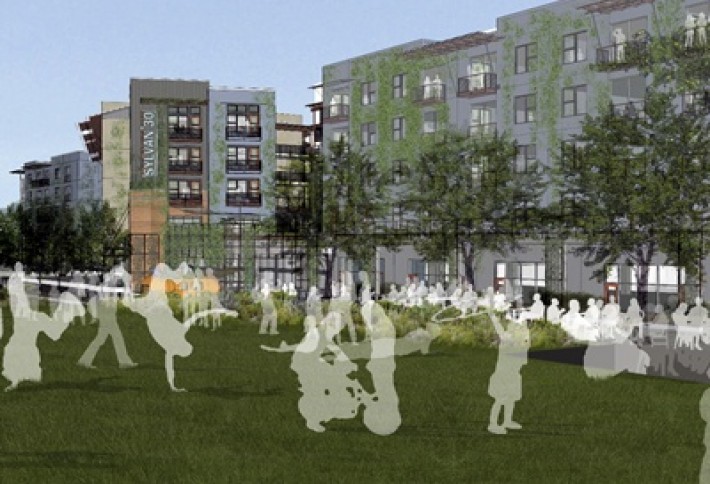 The design team includes Hocker Design Group, Hodges & Associates Architecture, and Lake/Flato Architects. Brent says this is an important project for the community and he's followed some guidelines to keep it focused on the neighborhood: keeping it multi-modal with I-30 just a block away and a Coombs Creek trail coming to the site. Other important factors: sustainability, the inclusion of business incubators, the promotion of local organic food, and community outreach with plazas and open space. Outside of work, Brent and his wife have three dogs and traveled to Kenya last summer to volunteer at an orphanage there. He also ran in a half-marathon last month in Dallas. Suddenly, we feel lazy.

Neal Richards Group, in association with Forest Park Medical Center and SRP Medical Investments, sold the 70k SF Class-A Forest Park Pavilion to Healthcare Trust of America. The sale is the first of five MOBs, which will be developed by NRG.

UCR Investment Sales closed on two retail properties totaling 203k SF with a combined sale price of $37M. Among the sales: the 90k SF Carrier Towne Crossing at South Carrier Parkway and I-20 in Grand Prairie and the almost 114k SF Southwest Crossing at 200 Southwest Loop 820 in Fort Worth. The centers were part of a five-property portfolio sold for Retail Properties of America.

Bright Realty's Britton Lankford repped the seller in the disposition of 1.4 acres on the northwest quadrant of FM 544 and McCreary Road in Murphy for Elevate Church. Service Realty's John Muzyka repped the buyer. Felcor Lodging Trust plans to rebrand, renovate, and reposition eight Holiday Inn properties (nationwide, including one in Houston) to Wyndham Hotels and Resorts effective March 1. The project includes a $100M guaranty from Wyndham Worldwide Corp with an annual guaranty of $21.5M. Wanna hear more about what Felcor has in store? Come hear itschairman Tom Corcoran (pictured) at our Dallas Hotel Investment Summit tomorrow morning at the Westin Galleria. He'll be among the star-studded panel with reps from Omni Hotels and AImbridge Hospitality, among others. Save your space here.

Medical Center of Plano will break ground in May on a $66M expansion and renovation at 3901 W 15th St in Plano. The project includes two additional floors with more than 56k SF above the emergency department; 68 new beds for critical/progressive care patients in the neurosciences unit; and renovation of public areas including the south lobby and cafeteria. Perkins+Will is the architect. Completion is targeted for late 2014.

Denton County selected Satterfield & Pontikes Construction as the GC for the first phase of the Denton County jail expansion and renovation. The $26.7M project will include 87k SF of new construction in a four-story building. HDR is providing architecture services. The project is scheduled for a 2014 opening.

EMBCC renewed its 40k SF lease at Two Energy Square. Lincoln Property Co worked the deal and a spokesman whispered to us that soon there will be a new restaurant announcement coming for One Energy Square on Greenville.

People on the Move

Skyler Baty joined IA Interior Architects as biz dev manager. She will be responsible for overall client services and relationship management. Previously, she was the biz dev manager for Merriman Associates/Architects.

Jay Bailey joined Jones Lang LaSalle as SVP in its Dallas landlord leasing group. He will focus on new business development and leasing. He comes to JLL from Cassidy Turley, where he was a managing director. (He's also a Baylor alum; Sic 'em!)

Good Fulton & Farrell promoted Traci Webster to principal and shareholder. She was director of interiors and worked on the Perot Museum of Nature and Science and Capital One. Maria Gomez was promoted from associate principal to studio director. David Dumas was named an associate principal.

JQ promoted John Hoenig to partner and Murali Kariyarveedu, Carlo Taddei, and Jamie Buchanan were all promoted to principals.

Did you happen to see the new installation of Icelandic artist Steinuun Thoransindottir (easy for you to say) yesterday at the future spot of the Hall Arts Center? The temporary exhibit (called Borders) features 26 life-sized figures and was recently in Seattle and on Park Avenue in NY before that. It's here till Hall Arts Center gets started. We're gonna have to swing by there this week to check it out. Share pics if you have 'em: tonie@bisnow.com.