Sterling Bay Looking To Cash Out On Another Trophy Office Building 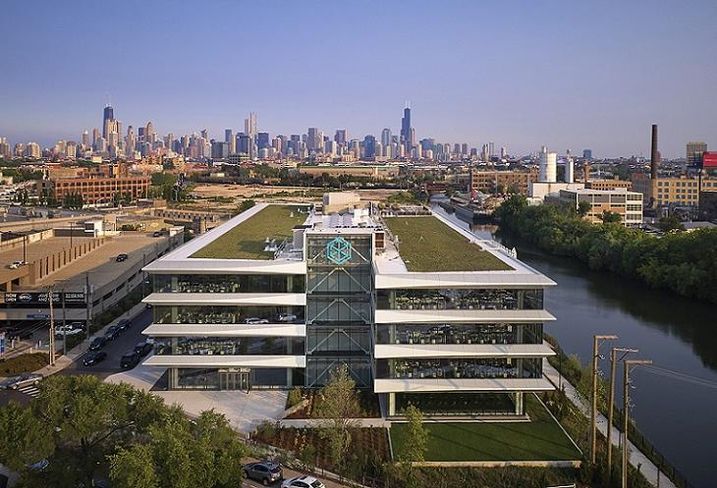 The investment market for office properties in the Chicago region reached a low ebb in 2019, but developer Sterling Bay is betting that trophy properties in a few select neighborhoods can still arouse curiosity among prospective buyers. The company just put up for sale the first building developed on its Lincoln Yards site, the 207K SF headquarters of logistics firm C.H. Robinson, an offering that could bring in about $120M, according to Crain’s Chicago Business.

The move comes directly after Sterling Bay also put McDonald’s Global Headquarters on the market. The 575K SF office building at 110 North Carpenter St. in Fulton Market is one of that neighborhood's flagship properties, and along with Google's 1KFulton, also developed by Sterling Bay, helped transform the submarket's image from a noisy industrial zone to a sleek, high-tech office center.

Not withstanding the concerns over the possibility of future property tax hikes throughout Cook County, that transformation gave investors such as Intercontinental Real Estate long-term confidence in Fulton Market.

The Boston-based firm bought Shapack Partners' 811 West Fulton Market, a new 70K SF building, in September for $50.3M, or about $775 per SF, the highest-ever price per SF for a Chicago office building, according to Cushman & Wakefield.

Sterling Bay is hoping buyers will see the northern end of Lincoln Yards, also a former manufacturing zone, in the same light. If 1515 West Webster does secure a buyer for $120M, that would work out to about $580 per SF, producing a roughly 5% annual yield, according to Real Estate Alert, which first reported the potential sale.

Sterling Bay officials say that would give a boost to their efforts to kick off even more development at the 55-acre site. Located along the Chicago River and sandwiched between Lincoln Park and Bucktown, most of the land remains vacant, but the developer hopes to fill it with a $6B mixed-use complex that includes office towers, apartments, retail and neighborhood amenities.

“When one of the world’s largest logistics companies announced its tenancy at the property, it further legitimized Lincoln Yards as a desirable destination for corporate relocation and gave us the momentum we needed to generate interest from outside investors,” Sterling Bay CEO Andy Gloor said in a prepared statement. “Now, as development plans continue to progress, we’re ready to market the property for sale and look ahead to future development at Lincoln Yards.”

Cushman & Wakefield will market the property.