Real estate investment plunged in 2019 throughout much of the Chicago metropolitan area, but several select neighborhoods, including South Loop and Fulton Market, still seem popular with investors.

JLL just closed the $68M sale of 801 Canal St., a five-story, 591K SF South Loop office building. JLL represented the seller, Canal/Taylor Venture, and procured the buyer, 601W Cos. Northern Trust Co. will fully occupy the property until August, and then leave for the Central Loop as part of a consolidation. 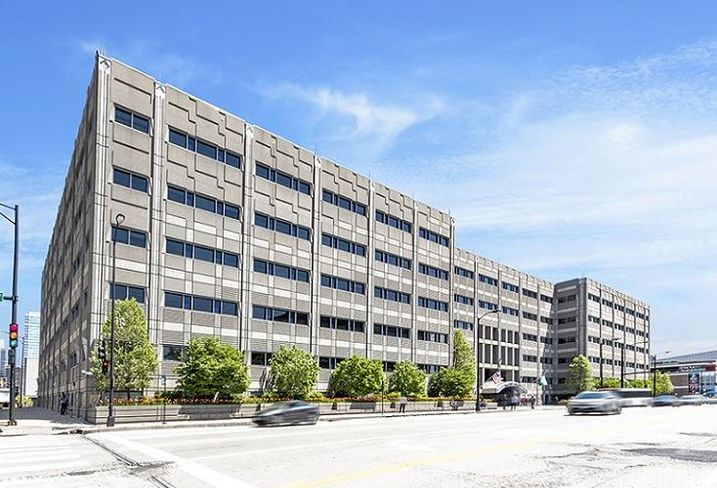 That gives 601W the chance to renovate and reimagine the building, which features 105K SF floor plates, as well as an on-site food hall, a fitness center, a day care, conferencing facilities and outdoor terrace space. The property also includes a 1.3-acre development site that sits directly south of the building.

“With an influx of nearly $11B of recent and ongoing capital projects surrounding Canal Center, the South West corner of Chicago’s CBD market has evolved into a major focal point within the city,” Fink said.

McDonald’s Corp. occupies 490K SF of the building, completed by Sterling Bay in 2018 on the former site of Harpo Studios. The hamburger giant's space includes its on-site training facility, Hamburger University, and a 6K SF, ground-floor restaurant. Other current tenants include Walgreens, FedEx and Politan Row.

“This is an extremely rare opportunity for an investor to become the owner of an urban headquarters space occupied by one of the world’s most valuable brands,” JLL’s Miller said.

Kattara Construction, a Chicago-based general contractor and construction management firm, welcomed Helenia Madrigal as vice president. A 25-year industry veteran, Madrigal will also hold the role of partner, and take an ownership stake in the company. She most recently served as director of interiors for Summit Design + Build.

Rachel Peck joined Entre Commercial Realty and will continue her work with corporate occupiers of real estate from a buyer/tenant representation perspective, both locally and on a national level. She will also work with her business partners, Mike DeSerto and Cory Kay, and focus on the sales and leasing of industrial properties in the DuPage and Kane County submarkets. Prior to joining Entre, Peck served as director of asset management for ML Realty Partners.

Opus Group promoted Ben Angelo to vice president of real estate development. He will continue leading the firm’s student housing platform. He joined Opus in 2016, and led a team that built more than 4,000 beds. 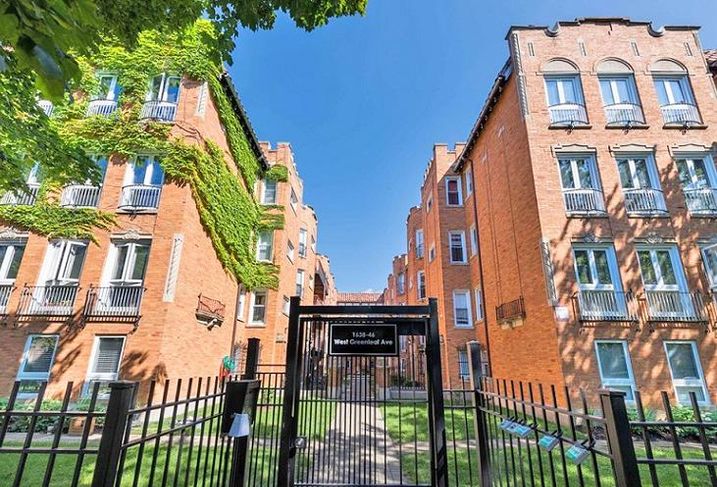 Interra Realty’s Craig Martin and Lucas Fryman brokered the deconversion sale of 1638-44 West Greenleaf Ave., a 40-unit multifamily building in Chicago’s Rogers Park neighborhood, for $6.5M, or about $162K per unit. The duo represented the buyers, a local investment group that purchased the asset through a 1031 exchange. They also represented the sellers, including a private equity group that owned 36 of the building’s units. Interra Realty has brokered more than a dozen deconversions since 2016, collectively valued at more than $100M.

Interra’s Brad Feldman brokered the off-market sales of two multifamily properties in Chicago’s Rogers Park neighborhood for a total of $9M. The 43-unit rental community at 7320 North Damen Ave., built in 1928 and last renovated in 2012, sold for $6.2M. The second property, a 20-unit apartment building at 2034 West Arthur Ave., traded for $2.8M. Built in 1930 and updated in 2012, it includes a mix of one- and two-bedroom apartments that were fully occupied at closing. Feldman represented both the seller, Marc Realty, as well as the buyer, Becovic Residential. 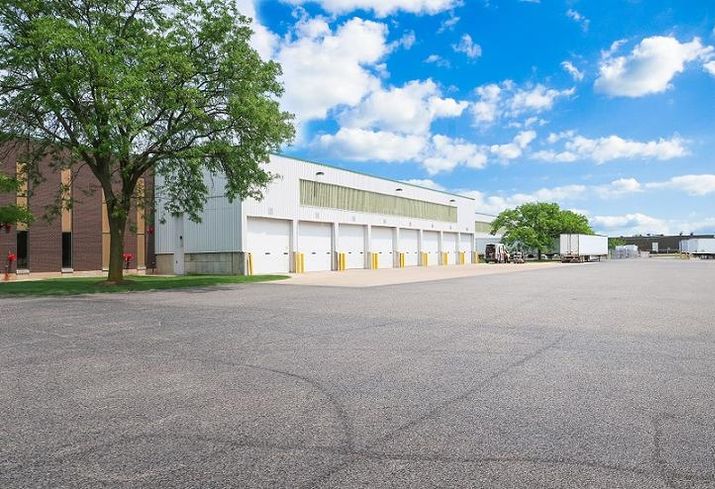 The brokers also represented Peerless of America in the sale of 7325 Janes Ave. in Woodridge to the Rosemont, Illinois-based Missner Group. The 44K SF single-story office asset is the longtime headquarters for civil engineering/contracting firm V3 Cos., which still occupies the building on a long-term lease.

North Wells Capital and Urban Innovations signed a long-term lease with Fairgrounds Coffee & Tea for more than 2,500 SF of ground-floor retail space at 306 West Erie St., a development under construction in the River North neighborhood. It will be the coffee shop’s seventh location in the Chicago area. The building is the first phase of Verso, a three-building collection that North Wells Capital will develop on the property, which it purchased in 2017. 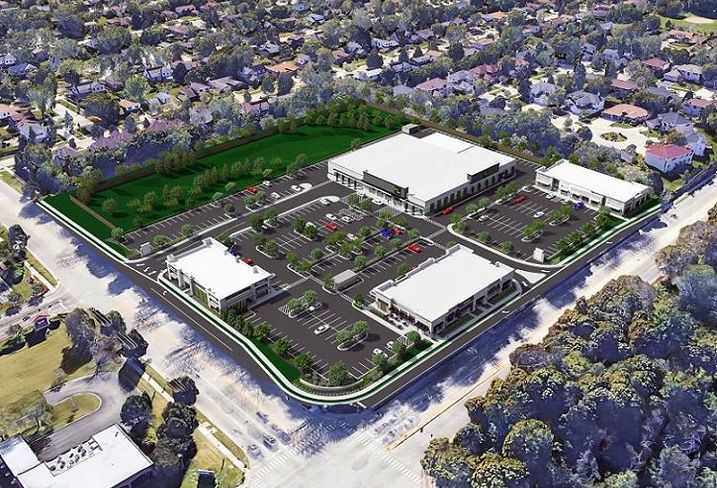 Associated Bank completed a nearly $18M land acquisition and construction loan to GW Properties for the development of a 62K SF, four-building shopping center known as Willows Crossing. Located at the southwest corner of Willow and Pfingsten roads in Glenview, it has already attracted tenants, including Mission BBQ, First Watch Café and an undisclosed 35K SF grocery. GW Properties officials said they will complete construction in the spring of 2021. 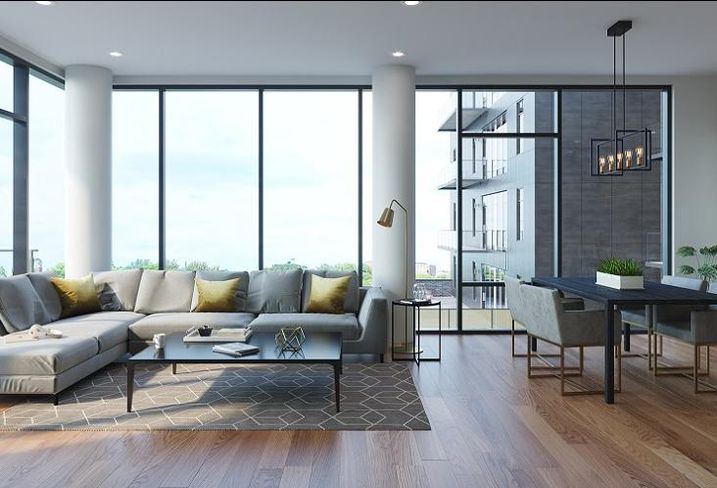 Courtesy of Sullivan Goulette & Wilson Architects
A unit at EVEQ

EVEQ West Loop, a new 32-unit condominium project rising in the West Loop, has topped off, and the first units will deliver this summer, according to officials from @properties, the exclusive sales and marketing firm for the development. Located at the northwest corner of Madison and Bishop, the building offers three- and four-bedroom floor plans of up to 2,300 SF. Designed by Sullivan Goulette & Wilson Architects, homes at EVEQ also have a balcony or terrace, with some offering more than 1K SF of private outdoor space.

After a delay of nearly four years, a new seven-story mixed-income apartment complex in the Jefferson Park neighborhood is underway. Nonprofit housing developer Full Circle Communities selected Joseph J. Duffy Co. to build the 75-unit building at 5150 North Northwest Highway. This is the companies’ fourth project together. The development will provide housing primarily for veterans, persons with disabilities and working families in the neighborhood. The 15 market-rate and 60 affordable units will feature condo-quality finishes, Full Circle officials said.

January nonresidential construction starts in the Chicago metropolitan area saw a big boost over 2019, according to Dodge Data & Analytics. Starts totaled $730M, up 63% from $447M in January 2019. Residential starts declined from $328M in January 2019 to $304M in this year’s first month.

Skender completed the interior renovation of the 23K SF headquarters for Paragon Biosciences, which invests in and advises bioscience companies. Paragon relocated to the 35th floor of 330 North Wabash from its office space in suburban Northbrook. Skender collaborated with Gensler and CBRE to complete the project.

General contractor Summit Design + Build completed the renovation of a four-story mixed-use commercial building at 444 North Orleans St. in Chicago’s River North neighborhood. The project, which started in early 2019, included the addition of a new floor, bringing the building to a total of five stories. The existing, 21K SF building was formerly home to a variety of corporate offices and high-end furniture stores prior to being vacated to make way for the renovations. The building now totals more than 25K SF, including first-floor retail space. The Lelyn Group is redeveloping 444 North Orleans St., and Von Weise Associates is providing architectural services.