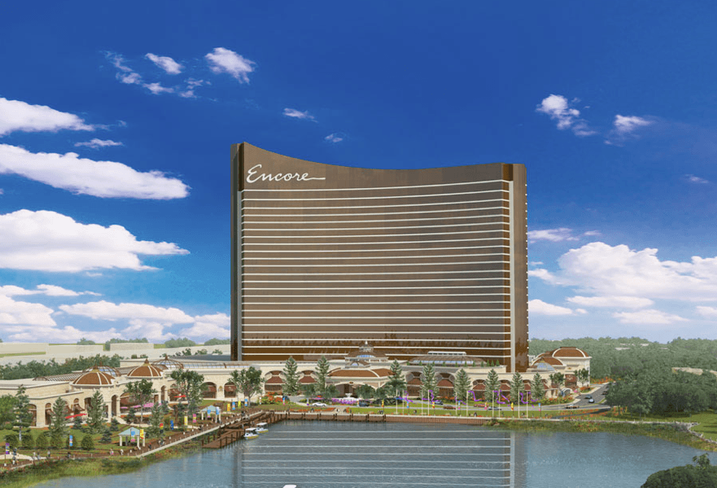 More entertainment is planned for a Greater Boston casino with an uncertain future.

The fate of the $2.5B Encore Boston Harbor is unclear, as the Massachusetts Gaming Commission wraps up its investigation into how much the board of the casino’s parent company, Wynn Resorts, knew about former CEO Steve Wynn’s alleged sexual misconduct.

While the MGC could take away Wynn’s license to operate its under-construction casino in Everett, Massachusetts, the casino’s operators are moving forward as though their resort is still on track to open in June.

The 350-foot hotel tower now has the Encore name scrawled across the top, and Wynn Resorts announced Thursday it signed two leases with a Boston entertainment company to add a restaurant and nightclub at the casino.

Big Night already owns several nightclubs in Greater Boston, including the Grand in the Seaport and CBS Sporting Club at Patriot Place near Gillette Stadium. Memoire will overlook Encore’s casino floor and be an “exuberant setting” of gold, leather, marble and chandeliers from Parisian flea markets, according to Wynn's announcement.

Mystique, alluding to the resort’s location along the Mystic River, will feature an Asian-fusion menu and be on the Encore Boston Harbor esplanade.

The two venues will be part of the 13 planned dining and lounge options at the 3M SF resort. Sinatra, a Wynn Resorts-owned restaurant, and Fratelli, an Italian restaurant jointly developed by North End restaurateurs Frank DePasquale and Nick Varano, have also been announced for Encore Boston Harbor.

“Mystique and Memoire are destined to be flagship destinations at Encore Boston Harbor,” Big Night Entertainment Group principal Ed Kane said in a prepared statement. “We are thrilled to be able to deliver the premier, first-class experience that guests will expect at the resort.”