MP Boston Is Reducing The Size Of Winthrop Center Again 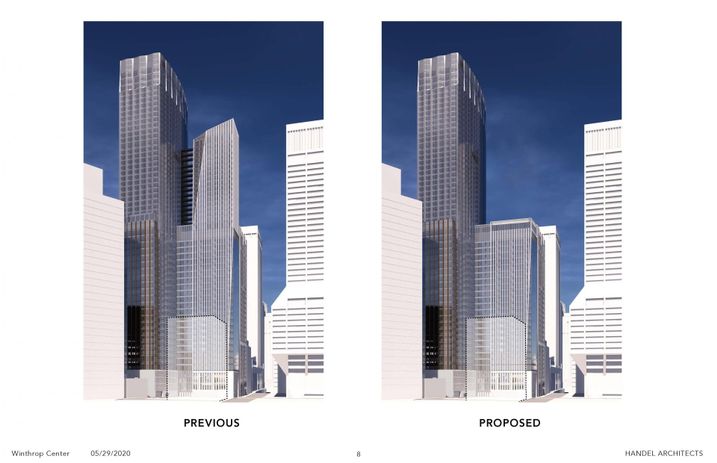 Citing the economic impact of the coronavirus pandemic, the developer of a 691-foot mixed-use Boston tower has announced plans to reduce the portion set aside for residential development.

Winthrop Center’s developer, Millennium Partners Boston, announced plans to downsize the residential space by 14% in a release issued Wednesday. The plan for the tower’s residential section, which was initially planned to be condos for sale, has also been changed to rental units.

“Adjusting the building in response to new economic constraints, Millennium Partners Boston’s priority is to move the building into the next phase of construction and ensure no compromise is made in the quality, safety, comfort, and well-being that Winthrop Center will deliver to occupants as Boston emerges from COVID-19,” MP Boston said in the statement.

Despite the reduction in residential space, the tower will still be nearly 700 feet tall. At the time of the groundbreaking in October 2018, it was slated to comprise 1.56M SF — more than half of which, 812K SF, has been allocated for office space.

As part of the new plan, Handel Architects has removed the residential portion of the east tower from the design, a Millennium spokesperson said in an email to Bisnow Thursday afternoon.

The tower’s approval from the city came at a price: an initial $102M payment to the city and further payments tied to proceeds from condo sales. In 2018, when the tower was approved, Boston officials expected the total economic windfall to reach around $163M. MP Boston said it will still pay $50M or more to the city if the residential segment of the project remains a rental development.

Millennium Partners initially planned to build a 775-foot tower but cut that height back to 691 feet when Boston park advocates shared their concerns about shadows on Boston Common and the Federal Aviation Administration voiced opposition over potential interference with flight patterns at Logan International Airport.

The reduction in residential space is not the only recent trimming down the developer has embraced. In November, Cargo Ventures, a Millennium Partners subsidiary, filed project plans for a Seaport East life sciences development one-seventh the size originally planned.

MP Boston is scheduled to complete Winthrop Center in 2022.