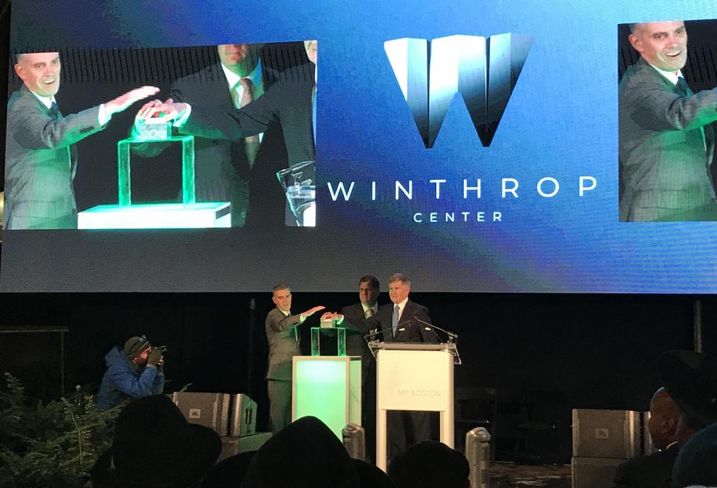 More than a decade after a different developer tried to build a 1,000-foot skyscraper, Millennium Partners broke ground on a shorter, albeit still towering, mixed-use development on the same spot.

"The comprehensive public community process that this project underwent created a much better project with strong benefits for the neighborhood and beyond," Boston Planning & Development Agency Director Brian Golden said Wednesday at the groundbreaking of Winthrop Center.

Golden, Mayor Martin Walsh and Millennium Partners founding partner and principal Christopher Jeffries were part of the groundbreaking, which included a fireworks display that launched from the Winthrop Center Construction site.

It wasn’t easy for Millennium Partners to even cross the starting line for its $1.4B, 691-foot project. Winthrop Center’s original 775-foot plan was scrutinized by Boston park advocates who were concerned of the impact its shadow would have on nearby Boston Common. The Federal Aviation Administration opposed it due to takeoff and landing patterns at Boston’s Logan International Airport. The developer eventually shrunk the tower and tweaked its design to appear like two towers.

Boston Mayor Martin Walsh was an advocate for the tower and agreed to deplete the city’s shadow bank to get the tower built. The law from the 1980s created a set amount of shadow new development could cast on parks like Boston Common. Jeffries thanked Boston's leaders for backing his company’s plan.

“It would have been easy to stop along the way and succumb to the obstacles,” Jeffries said. “Nobody on the public side did, and everyone saw the greater vision and greater good.”

Boston will get $15M in annual tax revenue from the 1.56M SF development as well as $163M from the sale of the city-owned parking garage that previously occupied the site. The money will go toward the budgets of Boston Common and Franklin Park as well as completing the Emerald Necklace network of parks. Some of those funds will also go toward the Old Colony and Orient Heights public housing complexes.

While he may have agreed to deplete the shadow bank to move the tower forward, Walsh stressed it wasn’t going to stop future downtown development.

“What that means is builders and designers have to be creative in how they can build inside the shadows already cast on the Common,” Walsh said.