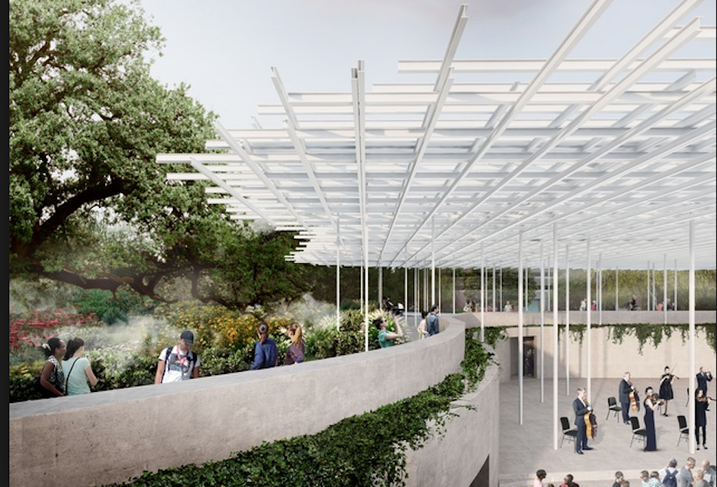 Austin finally has met its Waterloo, and it includes an open air amphitheater, a great lawn, cultural events and possibly some children’s interactive playscapes.

A groundbreaking inside the fence of the 11-acre Waterloo Park this morning symbolized the end of the oft-delayed tunnel project and the beginning of two years of construction to create a $64M destination point on the east side of Downtown.

Fundraising for Waterloo is 60% complete. A $15M grant from the Moody Foundation has jump-started the park’s makeover, which will be completed in 2019.

“Waterloo is going to become, on its own, a new hub of activity, a kind of new center for the city,” Waller Creek Conservancy CEO Peter Mullan told a tent full of supporters at this morning’s event. “That’s really one of our aspirations for it, that it’s a place that builds a sense of belonging to the city. This is what parks do. It gives us a sense of shared experience.”

Mullan, a New York City architect, came to Austin after a decade at the Friends of the High Line, the effort that created a breathtaking public park on an elevated rail line that runs the West Side of Manhattan, from the Meatpacking District to 10th Avenue. 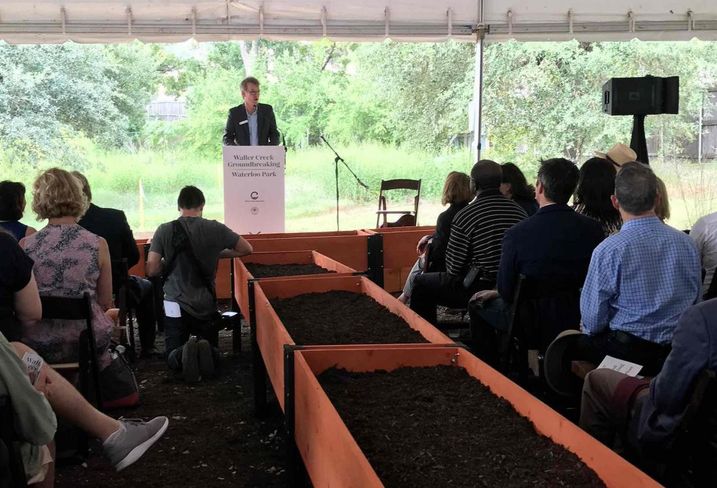 Waterloo Park will anchor one end of a 37-acre stretch of five urban parks from 15th Street to the banks of Lady Bird Lake. It serves as the inlet to a 20-foot-wide tunnel that will suck excess floodwater off Downtown streets and pull almost 30 acres of land out of the 100-year flood plain.

This morning, Mayor Steve Adler compared the significance of Waterloo Park and the Waller Creek corridor of urban parks to the creation of Barton Springs Pool. Waterloo moves the city forward by preserving what the people of Austin cherish: arts and the environment.

“When you think about everything you’re doing in your life right now, what are you doing now that people are going to be still talking about 150 years from now?” Adler asked the audience. “To reclaim this on behalf of, and in the name of, an entire community, an entire city, for an entire region of the country … That’s what you’re working on here today, that’s what gets started here today. It is bigger than that, what we are starting here today.”

The Waterloo tunnel ran about two years behind schedule because of a design flaw. Construction of the $163M tunnel is underwritten by a tax-incremental finance district shared by the city and county. That includes an extra $1.7M bump approved by City Council in February to finish out the project, on top of $6M approved in 2015.

Thomas Phifer & Partners will design the Moody Amphitheater. The entire urban park system on Waller Creek is anticipated to take a decade and cost $230M.