Will Traffic Ever Improve?

Mayor pro tem Sheryl Cole believes Downtown Austin is critical to the region's success, but she's concerned the City isn't doing the heavy lifting required to get a very important multimodal system. (Like your friend who helps you move, but somehow never seems to be straining very hard.) 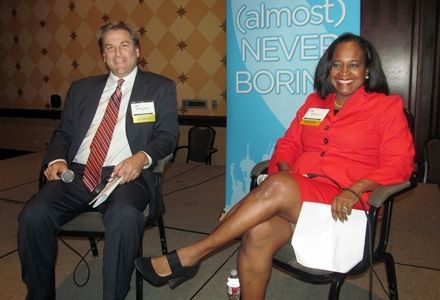 Sheryl (here with RECA prez Ward Tisdale, a fellow Longhorn) spoke at Bisnow's Future of Downtown Austin event last week, where she said transportation is one of two major policy issues she's watching. There's no such thing as a freeway anymore; most new infrastructure will be tolled, she says. (Stock up on pennies and gold dollars; that's subversive resistence, people.) She thinks Project Connect is visionary for high-capacity transportation; look for that to hit the ballot next November. High-velocity rail needs to be part of the plan, Sheryl says, but we may not be doing everything we can to get there. 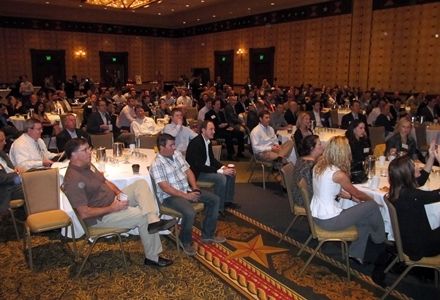 225 attendees joined us at the Hilton Austin. Sheryl's other policy issue: 10-1. That's the change to electing councilmembers by district, which will bump city council from seven to 10 representatives. Most of those will be new, and we'll also be swearing in a new mayor. Although people are nervous about what this will mean for the city, Sheryl says not to fear the change, but to make sure to vote for people who recognize the importance of Downtown. (Easier said then done, because most people love to vote unless there is literally anything else to do.) What gets her most excited: the Waller Creek redevelopment, which is happening much faster than she anticipated. 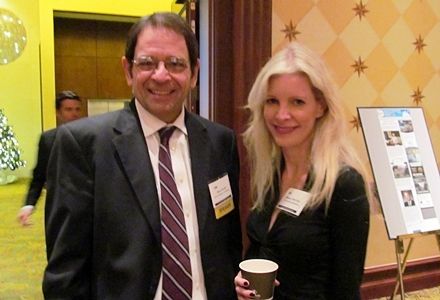 Austin Chamber of Commerce SVP of economic development Dave Porter (here with CTA Architects Engineers' Stacey Sheridan) says the city's horrible traffic can actually be a boon to Downtown—if employees live and work there, there's no commute. (But without a commute, how can we spill coffee on ourselves and yell at other people from the safety of our cars?) He also says most companies he's targeting are from areas like California, which don't bat an eye at our traffic. That said, one of Dave's primary goals is to get funding from all five counties for multimodal development. (Other areas of the region are resistant; they'd rather invest in their own cities.) Dave's seeing a huge increase in interest in Downtown. He has 10 hot prospects eying the submarket now; five years ago, there were none. 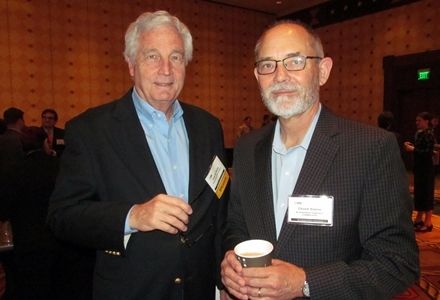 Downtown Austin Alliance executive director Charlie Betts (grabbing coffee with Architectural Engineers Collaborative's Chuck Naeve) agrees that rail is critical to Austin's future. He knows of a major company that wanted to move here but didn't purely because we didn't have any guarantee that rail would one day happen. (Was it the American Union of Train Robbers?) He says the public sector is uniquely important in Downtown Austin—47% of land in the submarket is publicly owned. He focuses on putting amenities and infrastructure into that space; it makes Downtown attractive for private investment. 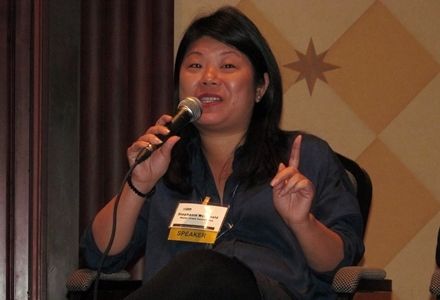 Waller Creek Conservancy executive director Stephanie McDonald says she has the best job in Austin (and with all the excitement around its redevelopment, she might be right). She says the project will bring east and west Austin together. Public projects like these are in big demand from young adults—consider the immense greening of Manhattan—and it can also bring families with kids back Downtown. She wants the redevelopment to be an impetus for private development. Already it's driving activity like the Fairmont Hotel and 99 Trinity Tower. 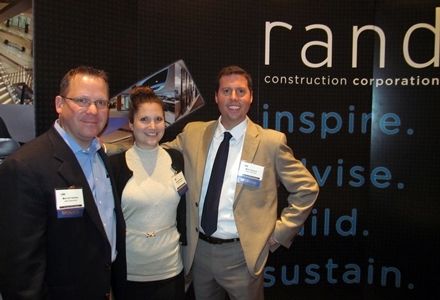 Our sponsor Rand's Merrell Ashley, Heather Martin, and Matt Dausch tell us the firm has been in Austin a little over the year. It's been a woman-owned company for 25 years with roots in DC. It's plenty busy here though: Rand just finished building out Haynes & Boone's 12k SF office and JMI's 5,000 SF. Now it's starting on a few floors totaling 20k SF for RBC, 8,000 SF for Soft Serve, and 30k SF for Gold's Gym in Westlake. 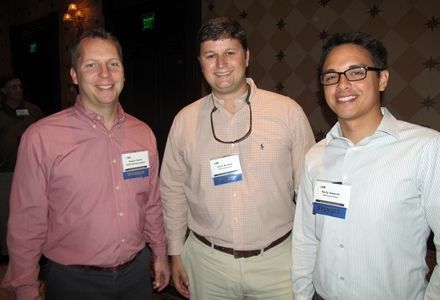 Many thanks to our sponsor DPR Construction. We found its Bogue Smith, Zach Brooks, and Kelly Deacon taking a break from building Colorado Tower. They tell us that property is six stories out of the ground. Only 24 more to go!