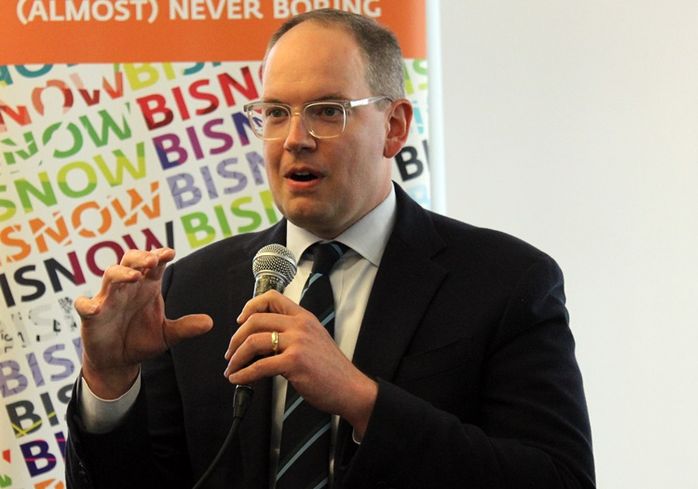 With New City likely to deliver the redevelopment of Murder Kroger completely full, the developer is already eyeing a second phase of the project.

New City is readying plans for a 180K SF office-centric mixed-use building that could rise on a 1.5-acre site next door to its 725 Ponce project.

“We started conceptual designs to sort of have something to put in front of tenants,” New City President Jim Irwin told Bisnow.

Irwin said there was no set date to break ground at this point on the second phase.

"[We've] obviously been exclusively focused on Phase 1 getting leased up," he said.

Even though it has not yet opened, New City's 12-story, $200M 725 Ponce project has tallied early success. The developer is finishing construction on the building with the street-level Kroger store expected to open by this summer.

Last month, McKinsey & Co. announced that it planned to lease 65K SF at the project, which sits across the street from Ponce City Market and along the Eastside BeltLine trail. Reports indicate New City is in talks with Starbucks, BlackRock and other tenants to take space, which would substantially fill the office component. Irwin declined to comment on any additional leasing news.

But the early work shows confidence that New City has enough momentum in the Old Fourth Ward neighborhood, where it directly borders, to warrant pursuing a second phase. 725 Ponce is in the Poncey-Highland neighborhood.

It also plans to break ground on a $750M mixed-use project just a mile south of 725 Ponce. Irwin said New City is aiming to break ground on that project by the fall, potentially going forward without any tenants signed to a lease.

That project, on land formerly owned by Georgia Power, would include up to 600K SF of office, a 140-key hotel and 350 apartment units on the first phase. Irwin said he has reason to be bullish on the Old Fourth Ward and surrounding neighborhoods: Companies are clustering there for what is becoming one of the hottest submarkets in all of Metro Atlanta.

“There is a tremendous amount of momentum in the city of Atlanta behind this alternative way of thinking about the workplace. Not just creative office, but where art and culture and workspace and community all find alignment,” Irwin said. “The good news is that we have the ability over time to meet the demand for this type of space in the Fourth Ward."

CORRECTION, APRIL 24, 9:50 A.M. ET: A previous version of this story had the wrong neighborhood for 725 Ponce, although the project does border on the Old Fourth Ward. The story has been updated.