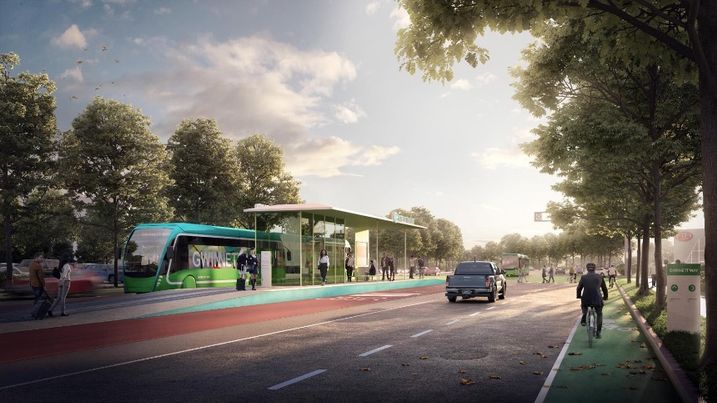 When voters in Gwinnett County go to the polls Tuesday, March 19, they will have the opportunity to revolutionize the county’s transportation mobility, spur economic development and help redevelop the region’s aging infrastructure.

Over the last three decades, Gwinnett has emerged as a hot spot for education and business. Its proximity to Atlanta and location along the I-85 corridor has helped attract a number of residential and commercial tenants. Since 1990, the county has grown by 200,000 people each decade and now has 1 million residents, a number projected to grow to 1.5 million by 2050.

But with great success come great challenges. As a result of the county’s rapid growth, traffic congestion has become a major issue for Gwinnett. To fix this problem, the county has introduced a referendum to improve the area’s access to public transportation and minimize the number of vehicles on the roads.

“We know from studies across the country and from our own experience in Metro Atlanta that companies with a high-skilled, high-paid workforce are demanding locations along transit corridors,” said Dave Williams, a former mayor and current resident of Suwanee who now works on transit issues for the Metro Atlanta Chamber. “With the transit plan that Gwinnett has created, we would expect to see a boom of mixed-use developments that attract the young talent Gwinnett must recruit to stay vibrant.”

The referendum under consideration in Gwinnett would seamlessly connect the county to the regional MARTA system while maintaining local control. Gwinnett would claim three seats on the MARTA board while still controlling project selection and service standards. All sales tax collected in Gwinnett will return directly to the county. The sales tax is projected to collect between $7B and $8B over the next 40 years to supplement additional revenue, primarily for rider fares and federal funding.

The Connect Gwinnett transit plan would extend MARTA heavy rail from the Doraville station into a transit hub near I-85 and Jimmy Carter Boulevard. Long term, extensions could connect Gwinnett Place and the popular Infinite Energy Center to the rest of the region. But in the near future, those areas would benefit from significant growth in Bus Rapid Transit and express buses.

“There’s a direct connection between expanded transit and more high-paying jobs,” Allen said. “More transit options give employers the ability to move their workforce to and from work more efficiently, while at the same time affording a new talent pool the opportunity to work for their company because of greater connectivity.”

“I visualize a high-quality, mixed-use development on the site of Gwinnett Place Mall that serves as the focus of a larger, vibrant community that includes a variety of choices in housing, employment, entertainment, transportation and retail,” Nash said to Bisnow in 2018. “Transit is a critical part of the vision, and the Gwinnett Place area is fortunate to be located in one of the main transit corridors identified in the transit development plan adopted just this week by the Gwinnett Board of Commissioners.”

Early voting for the Gwinnett transit referendum begins at the main elections office on Feb. 25 and expands to seven satellite locations from March 4 through March 15. Voters can also request absentee ballots.

This feature was produced in collaboration between Bisnow Branded Content and Gwinnett Place CID. Bisnow news staff was not involved in the production of this content.