No Longer The Only Game In Town: Georgetown Dining Scene Struggles As City Spreads Out

Rising retail rents on Georgetown's M Street corridor have made it more challenging for restaurants to stay open, causing the neighborhood's dining scene to shrink as more restaurateurs look to the city's emerging neighborhoods. 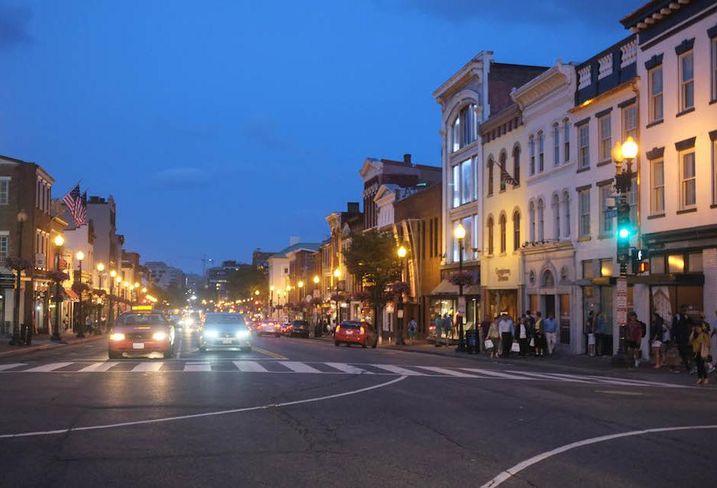 Three full-service restaurants opened in Georgetown in 2017, according to the Georgetown BID, while seven closed. Among the recent closings were Unum, Maxime, Pier 2934, The Daily Grill and Old Glory, which closed suddenly this week after 26 years in business.

Eleven D.C. submarkets had more restaurant openings than Georgetown last year, according to Dochter & Alexander Retail Advisors latest D.C. retail market report. The city welcomed a record 207 new restaurants in 2017, according to the report, with the most openings in the East End, the Central Business District and Shaw.

Growing dining areas such as Shaw, 14th Street, H Street, The Wharf and Columbia Heights have drawn more restaurateurs away from the city's traditional hubs like Georgetown, and Dochter & Alexander principal Dave Dochter said he also sees growing competition from emerging neighborhoods like Petworth and Brookland. 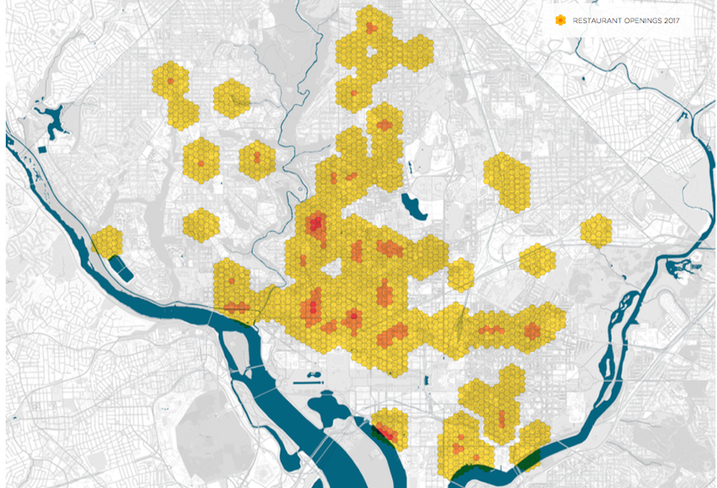 Courtesy of Dochter & Alexander Retail Advisors
A heat map of D.C. showing where restaurants opened in 2017

As of this week, Georgetown's M Street corridor has 22 restaurants open, compared to 45 in 2008, according to neighborhood blog The Georgetown Metropolitan. M Street has the second-highest retail rents in the city at $300/SF, according to Dochter & Alexander's report, making it difficult for small, local businesses to compete with national retailers.

"The economic pressures on Georgetown are hard to make work for restaurants, compounded with the fact that exciting neighborhoods are attracting attention," Dochter said. "The growth of the city is a great thing, but it's at a cost to what was the only game in town for a long time, and that was Georgetown."

A 27-year moratorium on new liquor licenses in Georgetown, which D.C. allowed to expire in 2016, represented a major roadblock for new restaurants opening in the neighborhood, Dochter said. The area also has relatively little office space compared to more central parts of the city.

"There's a lot of foot traffic, but there's not necessarily a daytime office population that would fuel a lunch business, so you rely on weekends, nights and evenings," Dochter said. "Sometimes that puts pressure on what a restaurant could pay [in rent]."

"For a lot of the national retailers, having a location in Georgetown is a really important marketing play for them, to say they're in Georgetown is important for their brand," Georgetown BID Director of Planning and Economic Development Jamie Scott said. "If they're a larger national chain, they have more resources than a local business and can absorb higher rent more easily. The margins of restaurants are small, they can't have the same occupancy costs a retailer can." 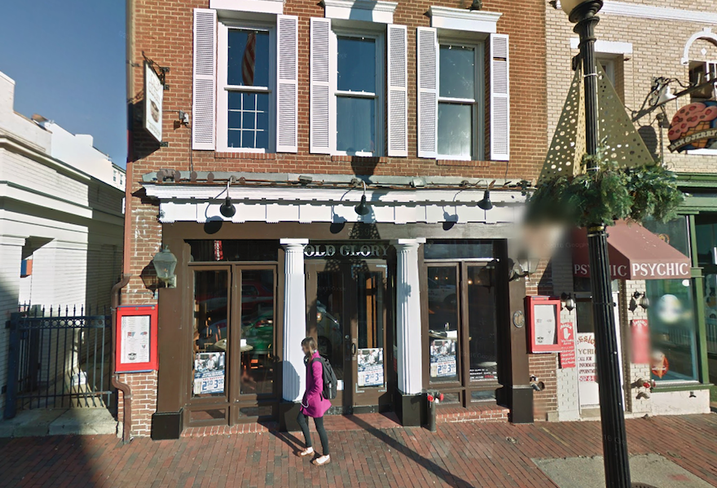 While landlords can get higher rent from national retailers, some owners with a large stake in Georgetown would rather take less money in order to improve the atmosphere and vibrancy of the neighborhood.

Barbecue joint Old Glory closed this week because its restaurant group, Capitol Restaurant Concepts, determined the 26-year-old restaurant had "run its course," The Levy Group's Richard Levy, the restaurant's landlord, said. CRC then partnered with José Andrés' ThinkFoodGroup to bring America Eats Tavern to the space at 3139 M St. NW. That restaurant, specializing in mid-Atlantic cuisine, is expected to open this summer.

As soon as the sign went up indicating Old Glory had closed, Levy said he got calls from several retail brokers interested in the space. He said he could have let Old Glory's lease expire and brought in a national retailer that would pay more rent, but the restaurateurs and the BID convinced him to keep the space as a restaurant.

"If all I was after was rent, I would not be doing José's restaurant, but finding that balance is important," said Levy, whose company owns 25 Georgetown retail properties. "I could have let the lease run out and with the vacant building I could probably get another 20%, but my interest is in a healthy community, not that last 20% ... what destroys the community is going after the last dollars and having rents people can't afford to pay."

Some restaurateurs who cannot afford to open on M Street are looking at Georgetown's less-expensive side streets. Chef Johnny Spero, previously the head chef at José Andrés' two-Michelin-starred restaurant Minibar, is opening a new restaurant at 3210 Grace St. NW. The restaurant is currently being built out and plans to open within four to six months, said Thyme Real Estate Holdings' Jessica Glass, the building's owner.

The building — which also has sandwich shop SUNdeVICH and Grace Street Coffee Roasters and will soon welcome a smoked fish shop — has relatively low rents for a Georgetown retail property, Glass said. This allows business owners who otherwise would not be able to open in the neighborhood to set up shop in Georgetown.

"What I've found with entrepreneurial, young businesses in this restaurant space is they have really fond and pleasant memories of Georgetown," Glass said. "People remember really fond times from this part of town, so they get excited about the idea, but it's been sort of untouchable for a long time because of what the rent levels were."