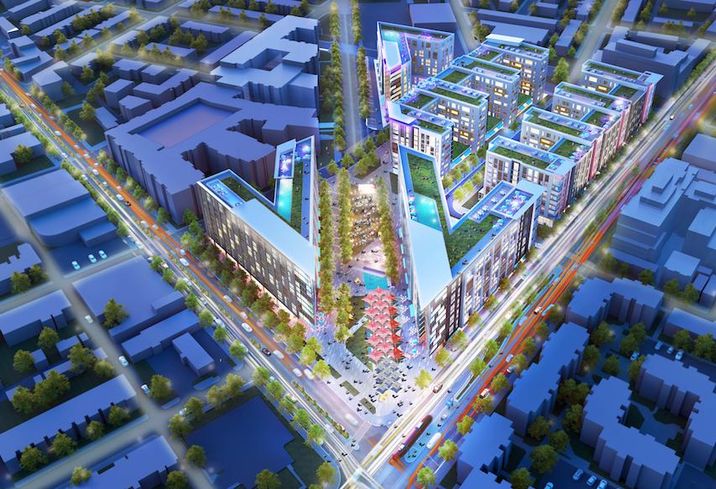 An 8.6-acre shopping center property on the eastern edge of the H Street corridor could soon become D.C.'s next major mixed-use development.

The 38-year-old, suburban-style shopping center is anchored by Safeway, Ross Dress for Less and Dollar Tree. It sits along the DC Streetcar line and next to a busy intersection where H Street NE, Florida Avenue, Bladensburg Road, Maryland Avenue and Benning Road all connect.

Development has been quickly moving east along the H Street corridor, and the development of the Hechinger Mall site has long been eyed as a potential game changer for the neighborhood.

Neighborhood organization H Street Main Street worked with consulting firm DLW LLC and architect My Ly Design in 2017 to come up with a conceptual design for the site. The team's vision included several buildings up to 11 stories tall with as many as 3,000 multifamily units, ground-floor retail, and potential hotel and office components.

H Street Main Street Executive Director Anwar Saleem said he was "elated" when he heard a pair of developers are under contract to buy the property. He said he wants to see a development on the site that includes affordable housing and more creative retail.

He thinks the site's development would be a catalyst and help the surrounding neighborhoods of Trinidad and Carver-Langston achieve the growth H Street has experienced in recent years.

"Ashkenazy hasn't done anything with it," Saleem said. "The bottom line is they should either do something with it or sell it and let someone else do something, because this area is deserving of something much better than what Hechinger Mall has been for years."

For MRP, a redevelopment of the Hechinger Mall site could be similar to another Northeast D.C. project it broke ground on last month. The developer is turning the former site of the Rhode Island Avenue Shopping Center into a mixed-use development planned to include over 1,500 residential units and 250K SF of retail. It is also moving forward with the second phase of its Washington Gateway project in NoMa.