Marriott International announced yesterday it has narrowed its HQ search to Downtown Bethesda, but is still waiting until the first half of 2017 to pick a specific site for the $600M facility. 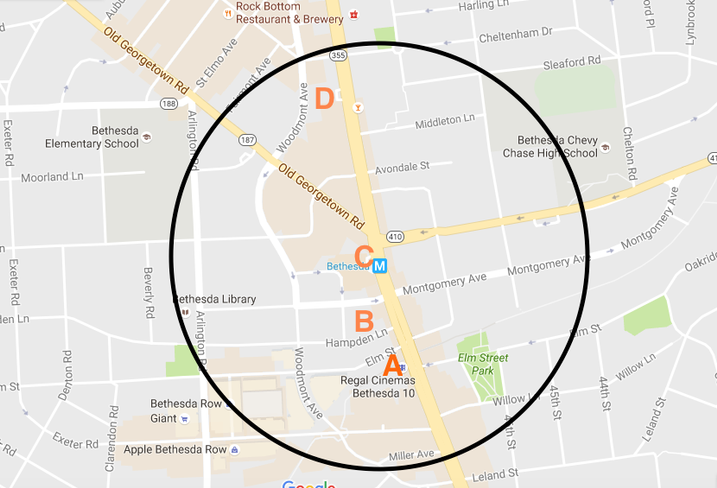 Marriott's search has focused on finding a more urban, transit-oriented location for a 700k SF office building, plus a 200-room Marriott-branded hotel.

Marriott EVP Carolyn Handlon, who is leading the search, tells Bisnow the company is leaning toward new construction and is looking at "several" sites within a five-minute walk of the Bethesda Metro Station. She could not offer any other specifics.

The circle on the map above shows roughly where that search would be limited to, and from talking to market experts, Bisnow has identified four potential sites Marriott could be choosing from. None of these owners have said they are competing for the HQ and some have plans for other projects, but when the region's largest private office tenant on the market comes knocking, plans can always change.


The Apex Building at 7272 Wisconsin Ave. in Bethesda

This site (above) sits above the future Purple Line's terminus and is approved for 940k SF. With Fannie Mae's 752k SF HQ already in the works, a win here could make Carr DC's office king. Given the location and the density approval, Delta Associates' senior associate Jonathan Chambers sees the bid as Carr's to lose.

"The Apex site is clearly the best fit given Marriott’s space and transit-proximity requirements," Jonathan says. "However, by remaining open to all feasible options, Marriott retains significant leverage at the negotiating table."

B: Assemblage of five separate properties on the 7300 block of Wisconsin Avenue

Jonathan says he has heard talk of five property owners of vacant or obsolete buildings on this block assembling their sites together to compete for the Marriott bid. The owners are Douglas Development with 4714 Montgomery Lane, Bainbridge with 7340 Wisconsin Ave, Washington Property Co with 4719 Hampden Lane, AOTA with 4720 Montgomery Lane and Chevy Chase Land Co with 7316 Wisconsin Ave.

The Toronto-based developer has gotten approval for a 290-foot tower directly above the Metro station. The location is a plus for the site, but the surrounding buildings would still make it nearly impossible for the site to accommodate the 700k SF and hotel requirement.

This site, home to the 74-room Bethesda Court Hotel, has been approved for a 500k SF mixed-use development. The plans would add the 222-key Westin Bethesda and an office building.

For Bernstein to compete for the Marriott bid, Jonathan says, they would need additional density, either through transfer from another property in the CBD or via the proposed overlay zone density pool. 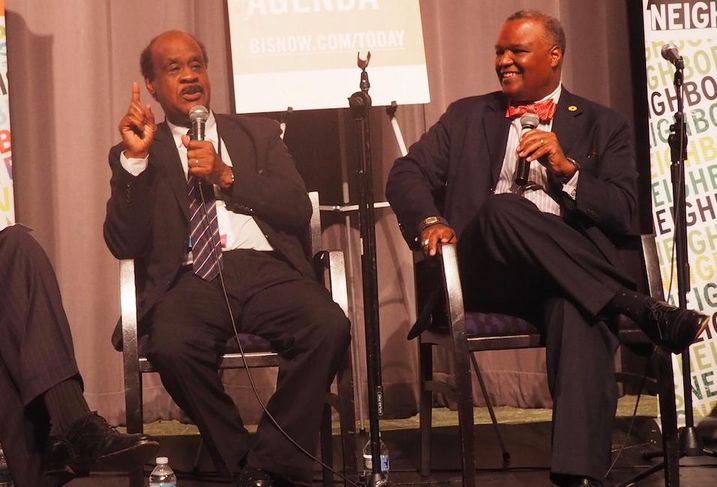 Luckily for the two sites with insufficient density approval, Montgomery County executive Ike Leggett says to keep Marriott in the county, the County Council must agree to raise height and density limits to accommodate the company's needs.

This agreement is part of Marriott's $44M economic incentive package, Leggett says. $22M will come from the county over the next four years and the other $22M will come from state funds. The county also agreed to accommodate the company's parking needs. The package still must be approved by the County Council, but Leggett tells Bisnow council members' reactions were "very favorable."

Leggett says the benefits of keeping Marriott are well worth the hefty incentive package. He projects the company will bring $90M in economic benefits per year to the county and state for the next 20 years, and he says building a new HQ will create 3,100 construction jobs.

"We feel very good that this is a win-win for the county and for the state," Leggett says.

“For over 60 years they have been a vital member of our business community, employing thousands of Marylanders, and making a real and lasting positive impact on our state’s economy," Hogan said in the statement.

Sizable economic incentive packages have become increasingly common in recent years with jurisdictions competing for major office tenants like Marriott. The DC government last year gave The Advisory Board Co a $60M incentive package to remain in the District.