Demand for D.C. office space in 2018 reached its highest level in nearly a decade, but the city's ongoing construction boom and other potential headwinds could keep vacancy rates elevated for years to come. 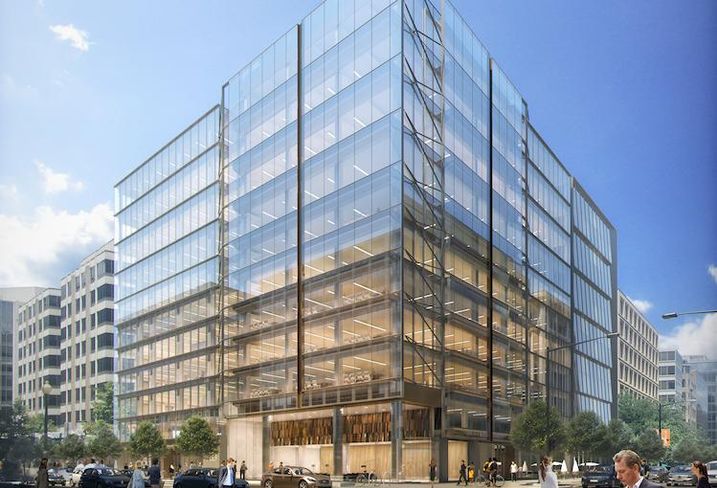 The D.C. office market in 2018 recorded its highest positive net absorption total since 2010, according to Q4 reports from Cushman & Wakefield, CBRE, JLL and Newmark Knight Frank, which each peg annual absorption between 2M SF and 2.8M SF.

"Big corporations are a huge driver for coworking," CBRE Research Manager Wei Xie said. "It's reflective of the flexibility and agile workspaces that corporations are looking for nowadays. We are very deep in this economic cycle, and right now flexibility is key. It's difficult for corporations to sign a multiyear lease with a lot of uncertainties in the near-term." 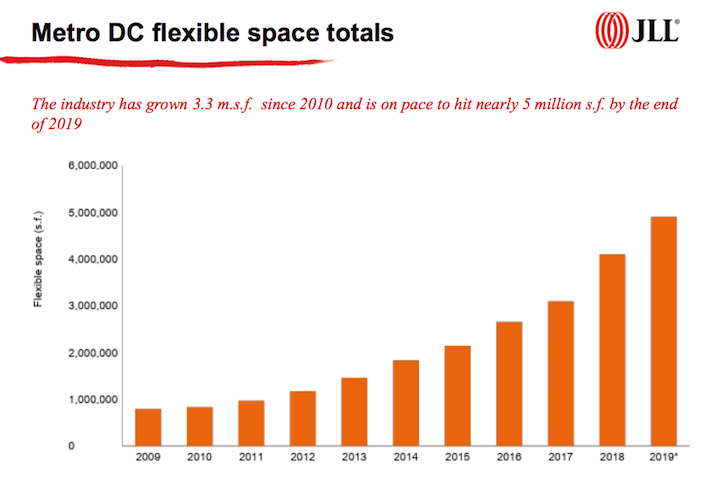 Courtesy of JLL
JLL projects the growth of flexible office space in the D.C. market to continue through 2019.

The growth of D.C.'s coworking sector is not expected to slow down in 2019. JLL Managing Director John Sikaitis said he has identified roughly 800K SF of deals currently in negotiations that have not yet been executed. The coworking sector currently comprises about 2.1% of D.C.'s office market, but JLL projects it to grow to 3% in the coming years.

"There's definitely some growth left in the market that's going to be realized," Sikaitis said.

That growth, coupled with D.C.'s blossoming technology sector, has helped the city diversify its office market away from the federal government.

"It's clear that the private sector is the one that is continuing to expand and take up space," Xie said. "Previously, government contractors and law firm contraction drove down growth, but in 2018 the contractions from the government and legal sector were muted, and there was actually positive absorption from the government sector, so that really helped." 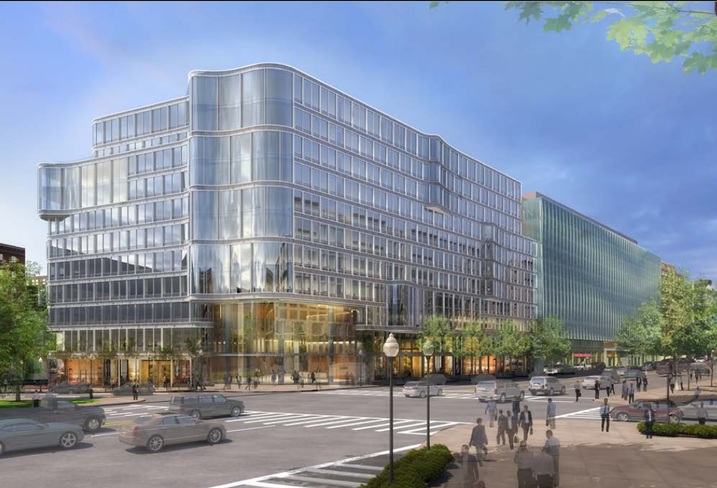 While government tenants contributed some growth last year, law firms continue to shrink their footprints. Many new office developments in D.C. are anchored by law firms taking the upper floors, but those deals often represent downsizing from the firm's previous space.

WilmerHale vacated 140K SF at 1801 Pennsylvania Ave. NW last year as it consolidates ahead of its move to a nearby Boston Properties development, according to Newmark Knight Frank. Mergers are also contributing to the legal sector's reduced footprint, such as Chadbourne & Parke vacating its space at 1200 New Hampshire as it merges with Norton Rose.

"That's going to be a challenge for D.C. because the biggest tenant that's continuing to densify is law firms," NKF Associate Director Bethany Schneider said. "Even if it's not a move to new construction, there's the aspect of mergers with one of the previous spaces given back or subleased."

Even with growing demand, D.C.'s office market dynamics have not improved for landlords. The rapid pace of new developments, many of which have large blocks of available space, has continued to increase the District's vacancy rate. Cushman & Wakefield identified 4.1M SF of office development expected to deliver in the central business district, East End and Capitol Hill in 2019 and 2020, and found that just 37% of the new space is leased.

"The sectors that are growing, coworking and tech, are not keeping pace with the new supply coming online, and beyond those two sectors we have not seen a whole lot of growth," Cushman & Wakefield Senior Director of Research Nate Edwards said.

The rising vacancy in D.C.'s CBD is coming in part from increased competition from emerging areas like NoMa and the waterfront, Edwards said. Competition has pushed D.C.'s office concessions to the highest level of any major U.S. city, and Edwards expects that trend to continue.

Another major headwind Cushman & Wakefield sees on the horizon is federal government gridlock. The House of Representatives flipping to Democrats will make it difficult to pass any legislation that would drive office demand, and the ongoing federal government shutdown gives further cause for concern, Edwards said.

"When we see stalemate, employers in the region get very skittish and like to wait until there's some clarity," Edwards said. "Right now, there's not a lot of clarity in the ability of the current administration and the House to legislate, so when that happens our largest employers, the federal government contractors and law firms, get into wait-and-see mode." 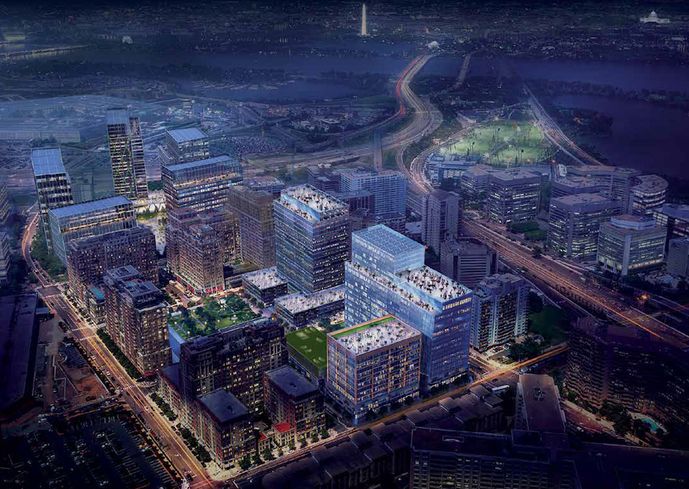 The region has gotten some good news in recent months that could help drive new demand, with Amazon selecting Northern Virginia for its 4M SF HQ2 campus. The tech giant moving in will boost the office market in Crystal City, experts agree, but it may not have a meaningful impact on the region as a whole.

"I think the impact will be significant and more immediate for Crystal City," Xie said. "However for the market overall, keep in mind Northern Virginia has a 160M SF office market, so 4M SF over a number of years is not as significant as the headline may appear to be."

Northern Virginia had already shown some improvement in its office market before the Amazon announcement. The market has benefited from demand growth without the rapid pace of new construction that D.C. has experienced in recent years. Vacancy in Northern Virginia fell from 20.1% in Q4 2017 to 19.2% at the end of 2018, according to NKF. The firm projects NoVa's vacancy decline to continue, a stark contrast to its projected vacancy rate increases in D.C. and suburban Maryland.