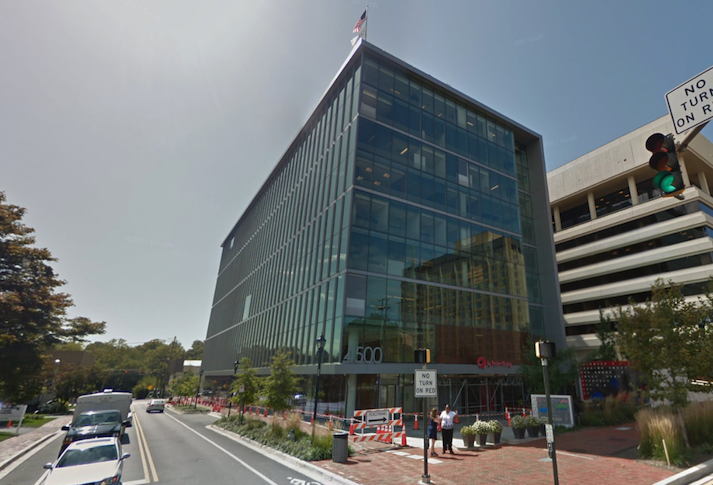 Montgomery County is forcing Carr Properties to take action to protect pedestrians after the third reported instance of a glass window fragment falling from its Bethesda building.

The county has ordered the landlord to build protective canopies that can withstand falling objects around the office building at 4500 East West Highway, which delivered in 2014, the Washington Post reports.

A piece of glass fell from the building Monday, and the county then closed sidewalks around the property. After the second such instance in August 2017, the county required Carr to have an independent structural review of the building. The 330K SF office building sits two blocks from the Bethesda Metro station.

Carr worked with Clark Construction as the general contractor for the project, and the team installed a $39M glass curtain wall on the building. In a statement emailed to Bisnow, Carr spokesperson Emily York said the company plans to have the protective canopies installed this spring.

"The building was constructed with 100% tempered safety glass that breaks into small granular pieces," York said. "Unfortunately, imperfections in the glass can cause breaks which has happened infrequently (approximately 1% of total panes) since the building was delivered in 2014. Based on input from our glass consultants, the risk of any ongoing glass breaks declines significantly with time. As an additional precaution, we are installing overhead canopies at the street level."

No injuries have been reported from the falling glass, but witnesses recounted harrowing experiences when the first panes of glass fell in 2017. Naya Robitaille, who lives nearby, told the Post she saw a pane fall from the seventh floor and heard "an explosive sound of glass shattering."

“It’s shocking that the building is still inhabited and allowed to sit there with its glass falling everywhere,” Robitaille told the Post. “I’m shocked it hasn’t been fixed and no one has been hurt. It seems crazy to me.”

The building is occupied by coworking provider Serendipity Labs, TEK Systems, Grant/Morgan Associates, Fidelis Security Systems and upscale Chinese restaurant Q by Peter Chang. When it delivered in 2014, it was the first new office building developed in Downtown Bethesda in over a decade, and will remain the newest until the current wave of construction starts to bear fruit.

Carr is also developing one of the office buildings currently under construction, a 300-foot-tall, 360K SF office tower at 7272 Bethesda Ave. The building, branded as The Wilson, is part of its major redevelopment of the Apex Building site that is expected to deliver in 2020.